DK Shivakumar says no Covid in Karnataka, but what is Congress's Mekedatu march all about?

It’s all hullabaloo in Karnataka over a river, its water, a dam, an unending conflict with neighbour Tamil Nadu, and Covid-19. Karnataka Congress unit started a nearly 100-km long ‘padayatra’ from Mekedatu to Bengaluru demanding progress from the ruling BJP government in the Mekedatu reservoir project. 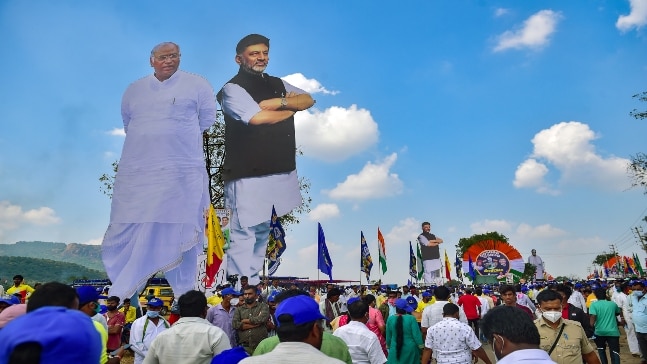 The 10-day padayatra which commenced on Sunday, January 9, is being led by KPCC President DK Shivakumar. This protest by Congress is of huge significance for various reasons, one of which is that this massive gathering of humans is moving from one place to another at the time of doubling Covid-19 cases and the Omicron threat.

Here’s the entire chaos summed up in 8 points:

1. WHY IS CONGRESS PROTESTING?

As we begin the Mekedatu Padyatra from the banks of Cauvery, we are hopeful of achieving our goal of adding Mekedatu to the list of Karnataka's reservoirs. And I know my Kannadigas brothers & sisters will join me in fighting for our rights.#NammaNeeruNammaHakku

The Karnataka Congress unit aims to build pressure on the BJP-led state and the Central government to expedite work on the Mekedatu dam on the confluence of the Cauvery and its tributary Arkavathi river in Ramanagara district, with the protest march.

The recent version of the project was first envisaged in 2013 and is still an ongoing issue. While the BJP government is also in support of the project, there has been little progress on the project. Over the years, padayatras, courts and war of words have been the norm over the issue.

The BJP-led state government raised the issue with the Central government on many occasions to obtain clearances. Karnataka Chief Minister Basavaraj Bommai in November 2021 had said that the issue needs to be resolved judicially. The main contention to kickstart the project comes from Tamil Nadu, which had strongly opposed its construction.

Congress party has undertaken politically motivated Mekedatu padayatra to fool the people... A notice has been served to Congress for taking out the padayatra violating Covid norms. Action in accordance with law would be taken for any violation: Karnataka CM Basavaraj Bommai pic.twitter.com/XOhkYXbkBo

The BJP government in Karnataka has called the move a ‘political gimmick’ by Congress. Karnataka CM Basavaraj Bommai said that if Covid norms are flouted – which they are in all forms going by the videos and pictures being posted on social media – then action will be taken accordingly.

BJP has also attacked the Congress, accusing them of starting a super-spreader event at the time of rising Covid-19 cases. Karnataka reported 12,000 new Covid infections on Sunday, January 9. The positivity rate stands at 6.33%.

Besides this, the BJP government has also asked the party to resolve the dispute with its ally DMK in Tamil Nadu rather than protesting.

Responding to BJP’s accusations of being a Covid-19 super-spreader, the KPCC president made some shocking comments too. DK Shivakumar on January 6, claimed that Covid-19 cases are not exploding in the state and that the numbers are being inflated by the BJP government deliberately. Reacting to Karnataka Home Minister Araga Jnanendra’s criticism of the padayatra over Covid concerns, KPCC President DK Shivakumar allegedly told a gathering in Kanakapura, “I welcome ignorant Araga Jnanendra’s statement. It all started with the rape issue and then he got raped.”

Jnanendra was responding to criticism by Congress over the state's law and order condition post the gang rape of a woman in Mysuru. The Minister had also apologised for his insensitive remarks.

5. WHAT IS THE MEKEDATU PROJECT?

Mekedatu is a deep gorge located at the confluence of the Cauvery river and its tributary Arkavathi river in Ramanagara district in Karnataka. It literally means a ‘goat’s cross-over’ because a goat or ‘meke’ can cross over ‘daatu’ the gorge.

The Mekedatu project basically intends to build a balancing reservoir downstream of the main reservoir, where excess water flowing out of the latter can be collected in the former. It is proposed to be built at the cost of Rs 9,000 crore and is projected to end all water woes of Bengaluru and neighbouring places.

Bengaluru is located nearly 90 km from the proposed dam’s location. The dam is also projected to generate around 400 MW of hydroelectric power.

6. WHY IS TAMIL NADU CONTESTING THE PROJECT?

Well, the Cauvery river water-sharing dispute between Karnataka and Tamil Nadu dates back to the time when neither of the states existed. The erstwhile Presidency of Madras under British rule and the Princely state of Mysore also fought over Cauvery water sharing and the latter’s proposed plan to build an irrigation system along the river.

The concerns of today were also the concerns back then. Mysore feared that the upstream state of Madras would take the lion’s share of the water, leaving residual amount for the downstream state. Since then, there have been various water-sharing agreements - one in 1924, the other in 2007, and more recently in 2018.

According to Tamil Nadu CM MK Stalin, as quoted by the Indian Express, there are three sources from where Karnataka is supposed to release water. Stalin said that currently, there is no dam on the first source, allowing free flow of water to Tamil Nadu. He accused Karnataka of trying to hold up this source of water by building the Mekedatu dam.

7. WHAT IS THE ENVIRONMENTAL FACTOR?

It’s not just a Karnataka vs Tamil Nadu dispute over the Mekedatu project. According to reports and activists, the construction of the dam will not come without an environmental cost. This is the third argument in the issue.

The Mekedatu dam construction is feared to inundate parts of Cauvery Wildlife Sanctuary and affect the Chamarajanagar and Bannerghatta forests too. There’s also a separate protest being planned by environmental activists to halt the construction of the project.

8. WHAT IS THE POLITICAL SIGNIFICANCE? Of course, there is political significance to Congress’s padayatra. Firstly, the massive movement has made rival political parties the BJP and the JDS take notice. JDS or the Janata Dal (Secular) has called for its own protest on January 26 where it will collect river water from 15 rivers and perform a Ganga Puja.

Besides this, JDS also claimed credit for the Mekedatu project, saying that it was under party leader HD Kumaraswamy as the Chief Minister in coalition with the Congress, that a detailed proposal on the project was prepared.

The Mekedatu project issue emerging in South Karnataka is of political importance because of the region’s Vokkaliga population. In Karnataka, Lingayats in the north and Vokkaligas in the south, hold major political influence. Dalits, OBCs and minorities together make up another influential group.

Now, with Assembly elections in 2023, Congress’s Vokkaliga leader DK Shivakumar seems to have set his sight on capturing the community’s support and pitch himself as the Chief Ministerial candidate. It can backfire for the party too, if Covid cases spiral post the padayatra, and it is blamed for it.

Besides, padayatras seem to have a sway for Congress in elections. Siddaramaiah came to power in 2013 on the back of a 300-km protest march held from Bengaluru to Ballari to oppose illegal mining and corruption by members of the BJP.

But what remains to be seen is that amid environmental factors related to the project and the padayatra being held during the Covid-19 surge, who will become the scapegoat? Will it be the common people of Karnataka, those living near the proposed project area, or those in Tamil Nadu?