Kar’nataka’: Where the government is doing everything but governance

The trouble is not new for the Congress-JDS coalition government in Karnataka. It has been brewing since day one for the alliance and should have been foreseen.

An elected government losing majority via defections and resignations is always a rather depressing scenario.

This is probably the ugly face of democracy. Claims that the centre is engineering it all remotely may be only half the truth. It is close to impossible to pry open solid coalitions. What happened in Goa is unbelievable. What's looming in Karnataka is almost a certainty. But only predatory behaviour has not triggered it.

There were underlying fault lines that the party in power may have exploited.

In our country, the voting public is quite forgiving in such matters. How many times have we seen defectors lose elections? Almost the opposite is true. As long as the elected representatives are doing their job the voters care little for their political ideology or party affiliation.

Goa was embarrassing for Congress as the erstwhile leader of opposition Babu Kavlekar led the split. Some of the ex-Congress lawmakers have cited the 'leadership vacuum' at the top for the switch. Now there is something the party needs to ponder over. After Rahul Gandhi stuck to his stand the Congress had looked rudderless. Now appeals have gone out for Mrs Sonia Gandhi to step in while the party chooses a new leader. The Gandhi family is — call what you want — the glue, catalyst or the unifying force that very much holds the party together. Any aberration may be catastrophic, as much as it may be an exciting new opportunity too.

Back to the present, let's take a look at Karnataka. 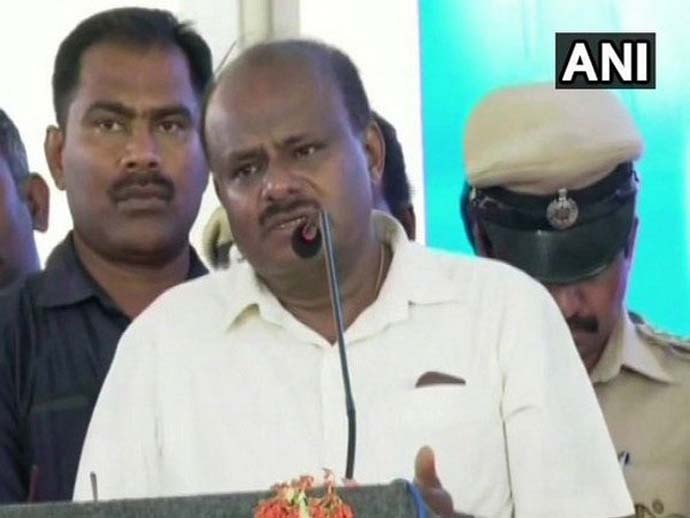 With Chief Minister Kumaraswamy reportedly asking for a floor test, the die seems to be cast. (Photo: ANI)

Trouble has been brewing since day one for the Congress-JDS coalition. It was left to brew for almost a year before the crisis struck. As early as July 2018, the Chief Minister had broken down while revealing the test he faced in keeping the coalition going.

There was some lull after Congress bagged Madhya Pradesh, Chhattisgarh and Rajasthan. However, it proved to be a false sense of security. Drama peaked in February 2019, after one JDS and seven Congress lawmakers skipped the Assembly session. In the run-up to the Lok Sabha elections 2019, Congress MLA Umesh Jadhav resigned from the party and joined BJP. He would go on to win the Gulbarga Lok Sabha seat.

A poor show by the Congress in the Lok Sabha elections meant that the writing was on the wall, literally. The latest crisis was probably triggered by the resignation of Vijayanagara MLA, Anand Singh and Gokak MLA Ramesh Jarkiholi, who was already suspended from the party.

The Speaker has a role to play, but there is little space for manoeuverings now. And with Chief Minister Kumaraswamy reportedly asking for a floor test, the die seems to be cast.

Money power may well have a role to play in the developments, but Rahul Gandhi saying that BJP is using money power and threats to topple governments makes little sense. He also said, “The Congress is fighting for truth because the truth makes Congress stronger.” He blames the BJP. But the Congress record here isn't blameless either. (Photo: AP)

The issue has reached the Supreme Court and one can only hope that the mandate of the people is respected and governments go back to the job of providing governance.

Also read: A political drama of naked greed: How the Kar'nataka' played out and the MLAs rebelled

#Karnataka mlas resignation, #Kumaraswamy, #Jds-congress alliance, #Karnataka crisis
The views and opinions expressed in this article are those of the authors and do not necessarily reflect the official policy or position of DailyO.in or the India Today Group. The writers are solely responsible for any claims arising out of the contents of this article.