Hindutva can sway votes south of the Vindhyas: 10 takeaways from Karnataka election results

May 15, 2018 will go down in history as a day when Indian politics rewrote the Harold Wilson oft-used quote that a week is a long time in politics. In India, clearly four hours is enough. At 12 noon, the BJP was celebrating a big victory in Karnataka; by 4pm, HD Kumaraswamy of the JD(S) was waving to his supporters as a potential king of Karnataka. Here then are my 10 takeaways after a day of high drama.

In the first past the post system, mandates are about the final numbers: in the 2014 general elections, the BJP had 31 per cent of the vote but won 282 seats, a decisive mandate. In Karnataka, the BJP with 36.2 per cent of the vote won 104 of the 222 seats, a strong showing but a far from decisive win, a reflection of the fact that Karnataka is still a mirror cracked with distinct sub-regional trends. 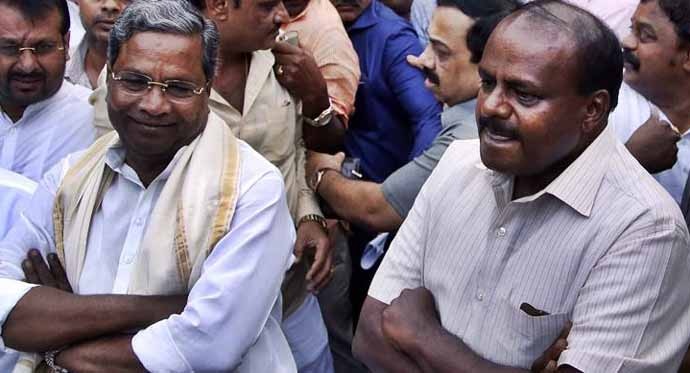 2) There was anti-incumbency: let's be clear that the Siddaramaiah government was rejected by the people of Karnataka. A dozen ministers in the government lost their seats, the chief minister was defeated in Chamundeshwari by over 30,000 votes and barely scraped through in Badami. The Congress may take heart from the fact that it's vote percentage was at 38 per cent almost two per cent higher than the BJP (and actually one per cent higher than when it won a majority in 2013) but that is no consolation. Once again, in the first past the post system, seats matter and the fact is that Congress seats have declined in every region of the state, an indication of the mounting anger also against many sitting MLAs who lost out.

3) Siddaramaiah is not a Pan-Karnataka leader: right through the campaign, the Congress chief minister positioned himself as the regional satrap taking on the mighty Delhi durbar of Narendra Modi. He claimed to be the original Kannadiga hero who stood for a sub national pride. That image appeared to sway many observers (including this writer).

In the end, Siddaramaiah couldn't cut across Karnataka's sharp caste, regional and religious divides: as his defeat in Chamundeshwari showed, even on his home turf, he was back to where his political career had begun: the tallest Kurba caste leader but not quite a Kannadiga icon we imagined him to be.

And while his welfarist schemes like Anna Bhagya had earned him the goodwill of people, his political decisions, be it offering minority status to Lingayats, taking on the Gowda family, refusing to share power with other Congress leaders or celebrating Tipu Jayanti with state funding, appeared to backfire. Far from being a unifying figure, he ended up polarising voters at one level. If the BJP almost won Karnataka, the Modi-Shah duo deserves much of the credit.

4) Narendra Modi and Amit Shah are the strength and weakness of the BJP: if the BJP almost won Karnataka, the Modi-Shah duo deserves much of the credit. They lifted a party that was struggling to find a effective narrative for change, that didn't have a local leadership of genuine substance, and one whose social base was much smaller than the Congress.

Shah's organisational rigour and Modi's oratorical skills almost pulled it off: in fact, there is enough reason to believe that it was the prime minister's final push in May that almost took the BJP to victory.

The over-reliance on Modi is a double edged sword: it gives the party a boost in a presidential like election but runs the risk of being subject to diminishing returns in the long run. BJP supporters may wish to ask themselves a simple question: why did HD Kumaraswamy choose to strike a deal with the Congress and not the BJP post election?

Sometimes, a seemingly invincible political machine can appear intimidating to smaller parties, one reason why the Shah-Modi duo may find it difficult to deal with the coalition mantra, especially in the 2019 elections.

5) Caste remains Karnataka's ultimate "brahmastra": forget corruption, collapsing infrastructure, drinking water scarcity, farmer suicides, all the government "bhagya" schemes, in the end, caste alignments determine votes. The Vokkaligas stood by the Gowdas, the Lingayats by Yeddyurappa, the Kurbas and Muslims with Siddaramaiah. Only the Dalits were split wide open between "Left" and "Right" Dalits, a reminder of the deep "sub-caste within a caste" fissures.

We thought that Siddaramaiah's AHINDA strategy would carve out a broad pro-poor alliance of the backwards: we forgot that the poor too wear their sharp caste identities when they enter the polling booth.

6) Hindutva can sway votes south of the Vindhyas: Mr Modi is right that the BJP has disproved the belief that the party is a Hindi-Hindu-Hindustan with its strong performance in a southern state. And yet, it isn't just the promise of good governance but a subliminal message of Hindu consolidation that underpins this outreach.

Nowhere was this better demonstrated than in the BJP's sweep in coastal Karnataka, where there was a conscious strategy to project the Congress as an anti-Hindu, pro-minority party to achieve majority community consolidation. This undercurrent of "Hindu-ness" extended to urban Karnataka as well, a reminder that the "educated" middle classes are particularly susceptible to toxic and divisive religious agendas.

7) Deve Gowda and sons are a successful business enterprise: right through the elections, most pundits and pollsters kept writing off the Janata Dal (Secular) as a declining political force that would be squeezed out by the rampaging two big "national" parties. What we missed is that even in the age of the super-malls, there is always a guaranteed loyal clientele for the local grocer shop.

Gowda has been in politics for 50-plus years, cutting deals and building solid grassroot networks: 2018 was time to encash the IOUs. He struck a pre-poll "secret" understanding with the BJP by which BJP votes were transferred to the JD(S) in southern Karnataka even while the favour was returned in coastal, central Karnataka and even in parts of old Mysore. Elections done, Gowda and son have bargained with a weakened Congress in their attempt to be kings and not just kingmakers. In a de-ideologised political marketplace, there are truly no permanent friends or enemies.

8) Rahul Gandhi is still on trial: Karnataka was Rahul Gandhi's big test after taking over as Congress President. He didn't quite flunk it but neither did he pass. That just about sums up Mr Gandhi's political career so far: neither here nor there. Yes, he put in a lot of effort in the campaign but the connect with the masses is still missing as is a unified Congress organisation.

There is anecdotal evidence to suggest that at the local level, not every Congress leader was willing Siddaramaiah to win: in a party stuck with a crab mentality, you only rise by bringing your rivals down. Rahul needs to re-invent himself and his party: it will require a mix of grit, charm and patience, qualities that he still hasn't quite shown. It is significant that when it came to post-poll deal-making, it is Sonia Gandhi and the Congress old guard that stepped in: Rahul, after all, disparagingly referred to Gowda and sons as the B-team of the BJP on the campaign trail.

9) Politics is not a morality play but an unadulterated pursuit of power: post-poll wheeling dealing is an integral element of a hung Assembly so let's not get too self-righteous about what's happening in Karnataka now. The BJP did it brazenly in Goa, Manipur and Meghalaya, now the Congress and the JD(S) are attempting a post poll coalition in Karnataka while the BJP looks to break parties. Resorts will be booked, MLAs will be enticed, the Raj Bhavan will be the scene of much political intrigue.

Let the BJP not claim to be a party with a difference, let the Congress not argue that they haven't misused the governor's office in the past. "Iss hamam mein sab nange hain" is my favourite description of our political rulers.

One can only feel sorry for the people of Karnataka who need good governance not perennial political instability.

10) Journalist instinct is sometimes superior to pollsters number crunching: Karnataka is a tough state to predict with a one per cent swing resulting in a big shift in seats. So we should give a break to the pollsters who got it wrong and take exit poll numbers next time with less certitude: India Today's Axis My India for example has been on a dream run, only to face the harsh reality that no pollster is infallible.

Maybe, our reporters who were suggesting a 50-50 fight were better positioned to predict a hung Assembly. And while I apologise for getting the exit poll numbers wrong, let me remind you: in my 10 pre-poll takeaways, I had warned that the Karnataka political league could be heading for a super-over.

Well, that's exactly what we've got.

Also read: Karnataka verdict: Why BJP should be the last party to cry foul over horse-trading