Get a grip, Congress! The party blames BJP for all its woes. But has it ever looked at these weaknesses within?

The INC-JD(S) alliance was doomed from the start. Similarly, the demographics and the language of the Congress showed it was totally out of touch. Why blame the BJP?

After 12 days of continuous ‘nataka’ in Karnataka, HD Kumaraswamy has been dethroned from the CM's position as the JD(S)-INC coalition fell short of a majority. The rebel MLAs, who shook the earth for the ruling government, camped in Mumbai’s luxury hotels and amidst such a long delay in the floor test, both the parties failed to woo them back.

Majority lost, CM dethroned — the INC and JD(S) are back to square one — and the blame game is on now.

From its first day, the Cong-JDS alliance in Karnataka was a target for vested interests, both within & outside, who saw the alliance as a threat & an obstacle in their path to power.Their greed won today. Democracy, honesty & the people of Karnataka lost.

The former INC President has his full right to point fingers at others — however, in this vicious circus of blame games, he is forgetting the fact that when you point a finger at someone, there are three others pointing right back at you, which fact Mr Gandhi has apparently comfortably ignored.

By forming a post-poll alliance with its arch rival in Karnataka, the INC didn’t foresee the possible outcomes of the alliance as it was blindfolded with the sole objective of defeating the BJP and coming to power — notwithstanding the values of the party and its supporters. 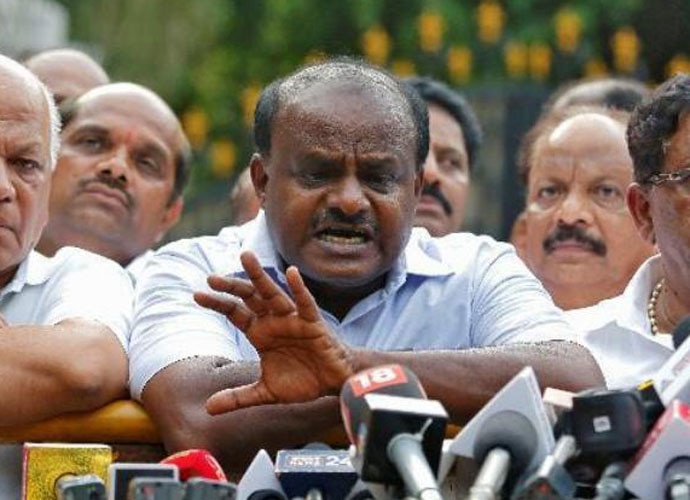 In the 2018 Assembly polls, there were around 43 seats where the INC and the JD(S) had a one-on-one fight (both of them were on first and second positions). The unholiness of this post-poll alliance led to a lowered morale of the losing candidates, their workers, their supporters and most importantly, their voters.

Also, the margin of the victory of the rebel MLAs in the state was abysmal. Four of them won with a MOV of close to 1%. Half of them had below 10% victory margins.

This combination of joining hands with the arch rival and not taking the marginal winners turned out to be an Achilles heel for the party and within 14 months, this marriage of convenience came to an end.

Not just Karnataka, but the defeat that the grand old party faced in other major elections should not be attributed to the BJP, but to the way INC functions.

Look at the way it contested the 2019 Lok Sabha polls.

Rahul Gandhi, who has been portrayed as a 'youth leader' for so many elections, is 49 years old (my dad’s 50, by the way). Half of our country’s population is below the age of 25, making them the epicentre of all political parties. But, the grand old party chose to field grand old leaders, again. The median age of the candidates fielded by the INC in the 2019 Lok Sabha Elections was 57 — almost double the median age of the country.

This makes us ask one question — does the party not have a strong youth base?

The INC has two big youthful (and somehow useful) assets — the NSUI and the Youth Congress. The Youth Congress was set up by former PM Indira Gandhi in 1960, with the vision of involving youth in social work and pitting them against the right-wing parties. The Youth Congress, seldom seen doing any social work these days, became a laughing stock on national media when they had no clue about the alleged corruption in the Rafale jet deal — the one they had united to protest against.

The NSUI, the wiser lot of the youth involved in politics, has some sort of presence. Last year, it won the student union elections in Allahabad University along with some other educational institutions in Gujarat and Rajasthan — however, the INC seldom promotes these young leaders emerging from academia, and by the time they do, they have grown old. Where is the youth? Despite NSUI, Youth Congress and a 'youth leader', Congress still banks on elderly leaders. (Photo: India Today)

In the case of Karnataka, the INC, perhaps, was not even interested in wooing the youth. Have a look at the Twitter handles of the state youth machineries — the NSUI Karnataka only retweeted whatever the NSUI President Neeraj Kundan tweeted and the state Youth Congress didn’t seem to be active at all, at a time where the state's political crisis was echoing around the country.

Also, the party doesn’t seem to be actively caring for its voters when it was in the Opposition while its rival, the BJP, continued to win mass confidence. Petrol prices — which have shot up many times since 2014 (that too at a time when crude oil prices are low) — still pinch ordinary citizens. I remember when such incidents happened during the UPA's tenure, we would see the BJP organising “Bharat Bandhs”, telling the aam janta that the party too is hurt when the people are.

I don’t see such Bharat Bandhs, such protests against inflation or any other matter of public interest coming from an INC-led Opposition. The issues still hurt — but it feels like the Opposition doesn’t care.

The BJP (while being a crorepati party) created a perception that the INC is a royal party and the INC did nothing to counter it; rather, it came up with an elitist slogan like “Chowkidar Chor Hai” to target the Prime Minister — which gave more miserable results to the party. This simply means that the party is just not getting the pulse of the voters right.

It has lost Karnataka now and a similar situation is brewing in Goa. In times when the party is in a series of crises, the party president has resigned. The Congress has come to such a stage that even Rahul Gandhi doesn’t want to steer its engine.

Will he put the blame for this on the BJP too?

Also Read: The ‘nataka’ of numbers in Karnataka: With Kumaraswamy's back against the wall, the fight is not easy for the BJP too

Post your comment
#Kumaraswamy loses, #Karnataka mlas resign, #Karnataka bjp vs congress-jds, #Karnataka crisis
The views and opinions expressed in this article are those of the authors and do not necessarily reflect the official policy or position of DailyO.in or the India Today Group. The writers are solely responsible for any claims arising out of the contents of this article.

Author is a correspondent with India Today TV