Has Congress scored a self goal by tying up with JDS

After ruling for five years, the party has readily agreed to play second fiddle and fulfil all the demands of a regional satrap with almost half its seat tally.

Before we debate who actually won the Karnataka elections, let us do the easier thing and locate the loser. It is the voter of Karnataka. After having won over 120 seats in 2013, if the Congress is reduced to 78, the mandate is clearly against the incumbent. The Janata Dal Secular (JDS) could not better its performance either. The fact that the Bharatiya Janata Party (BJP) did not reach the halfway mark means that the voter will either be subjected to a government formed through an alliance of two parties that hate each other or a government formed by horse-trading. 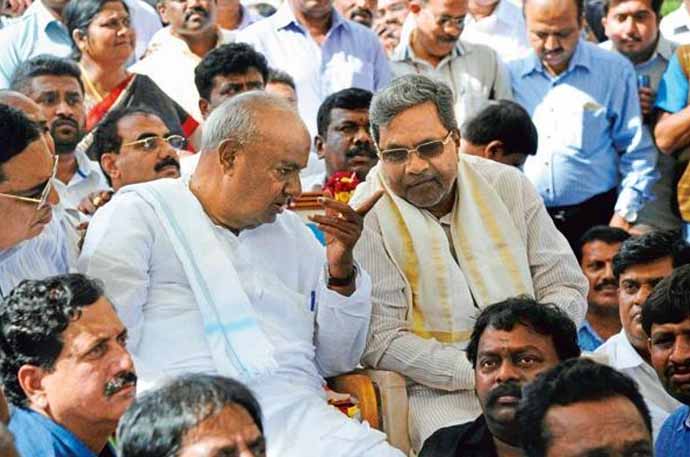 From Congress' standpoint, it is right in trying to give BJP a taste of its own medicine. But as an observer, if you criticised Goa and Meghalaya, you cannot be supporting Karnataka, or vice versa.

Instead of sitting in the Opposition, when Congress and JDS decided to forge an alliance, it insulted people's mandate. Even if BJP did not get a clear majority, it was ahead in every region of the state, except Old Mysore. It consolidated in its strongholds such as Coastal Karnataka and dented Congress bastion like Hyderabad-Karnataka. And the biggest indictment of the Congress government is the fact that the chief minister lost badly in his old bastion Chamundeshwari, and barely scraped through in Badami.

Siddaramaiah seemed to be in control. He had a wider social base and tried to counter Modi with Kannadiga pride. A strong regional leader looked like a perfect answer to an "outsider" like Modi. On the other hand, Yeddyurappa was well past his prime. And the BJP had brought back the tainted Reddy brothers as well. But that did not help Congress in any way. Modi's enduring appeal and dedicated party cadres on the ground appear to have made the game easier for the BJP. However, it must be said that BJP crossed the halfway mark in 2008 without Modi.

Much of the downfall of Siddaramaiah is blamed on his social engineering. He belongs to Kuruba community, the largest OBC group in the state. He is accused to having favoured Kurubas everywhere and ignored other OBC groups. That would have resulted in some sections of OBCs going to BJP. From the voting figures, it seems Congress was not able to get Muslim, SC/ST votes en mass either.

As per BJP leader Ram Madhav, Andhra Pradesh CM Chandrababu Naidu tried to swing Telugu votes in Hyderabad-Karnataka region against BJP, but could not succeed.

The paradox of the alliance is JDS' core vote base is the dominant peasant caste of Vokkaliga, which hates Siddaramaiah, and by and large, is smitten by Narendra Modi.

In Old Mysore, where Congress and JDS were engaged in a fierce battle with the JDS, Rahul Gandhi had accused them of having forged a secret alliance with the BJP. Both Rahul and Siddaramaiah were targets of personal attacks from Deve Gowda and HD Kumaraswamy.

Will the voter now accept their post-poll alliance? By citing Goa and Manipur, Congress has diluted Rahul Gandhi's own endorsement of principled politics. It seems like a desperate attempt to cling on to power. However, my hunch is that this is a win-win situation for BJP, and it will harm Rahul's politics in the long run.

If the BJP manages to prove its majority on the floor of the House, it will boast about having taken another state away from the Congress - 21st, to be precise. If it fails to do so, it will open up another opportunity for Modi to play his favourite victim card, and project JDS as Congress' B team, something that the Congress has been trying to tell the voters is not true, since it is alleged that BJP had purposely fielded dummy candidates in constituencies where Congress and JDS were locked in a close fight.

The discourse will clearly bring BJP to the centre stage.

It would be naïve to expect a Congress and JDS government to function smoothly and avoid friction. Deve Gowda might be turning 85 soon, but I believe his memory is sharp enough to remember how Congress president Sitaram Kesari withdrew support to his government in merely 10 months after Gowda became the prime minister in 1996.

The current developments offer him an opportunity for a sweet revenge. In the recent past, Kumaraswamy has backstabbed Congress when it pulled out of the Dharam Singh-led coalition in 2006, switching sides to the BJP.

The current situation thus opens room for speculation over what lies ahead. Let us not forget that Siddaramaiah broke away from the JDS because Deve Gowda promoted Kumaraswamy. He would be eager to settle scores with Siddaramaiah and other Congress leaders.

In that sense, Karnataka might prove a precursor to the general elections of 2019. BJP will project this opportunistic alliance to discredit any sort of federal front that may be formed.

It will create an atmosphere of how a coalition government would be busy fighting within itself and despite all our drawbacks, we are still the best bet that you have.

Moreover, after having ruled the state for five years, Congress has readily agreed to play second fiddle and fulfil all the demands of a regional satrap with almost half its seat tally.

Mayawati, Akhilesh Yadav, Arvind Kejriwal or Mamata Banerjee would be closely looking at what's unfolding in Karnataka. I am pretty sure May 15's events have emboldened their bargaining power with the Congress.

They would no longer be willing to play a secondary role, and would question Rahul Gandhi's legitimacy and moral right to lead the third front. With a dedicated social media army, "loyal" news channels and the mass support Modi enjoys, it would not be too difficult for BJP to exploit the scenario. And if at all it happens, we will look back at the Karnataka elections and say, "This is where it went wrong."

#JD(S), #Congress, #Karnataka elections, #Karnataka verdict
The views and opinions expressed in this article are those of the authors and do not necessarily reflect the official policy or position of DailyO.in or the India Today Group. The writers are solely responsible for any claims arising out of the contents of this article.