Pakistan’s federal minister for Information and Broadcasting Fawad Chaudhry claimed that Pakistan is maintaining its offer to open Kartarpur border.

It was a hug between Pakistan Army Chief Qamar Javed Bajwa and former Indian cricketer and Congress member Navjot Singh Sidhu, during Prime Minister Imran Khan’s oath taking ceremony in Islamabad, which led to Pakistan deciding to open the Kartarpur border — a move that would allow Sikh pilgrims to have a visa-free entry into Pakistan and visit the Darbar Sahib Gurdwara.

With both countries exchanging fires on the Line of Control (LoC) and stern statements being exchanged, daring each other to not underestimate each other’s war fighting ability, Darbar Sahib Gurdwara has become a major talking point. 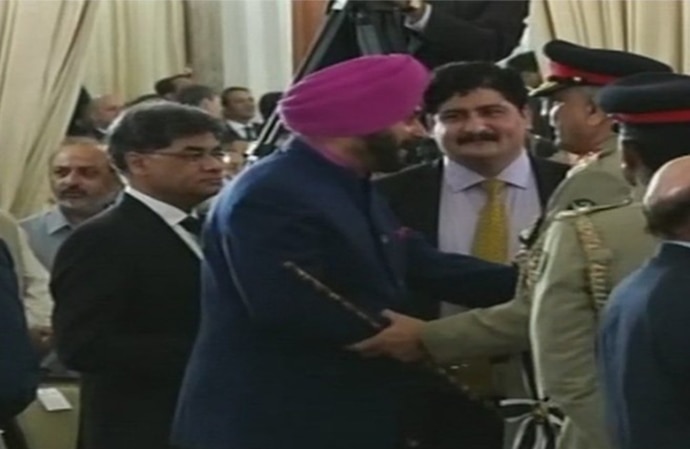 A hug that started it all. (Photo: Indiatoday.in)

Located less than three kilometres from the Indian border, Darbar Sahib Gurdwara Kartarpur stands as a beautiful and prominent white structure among the widespread farm fields. The Gurdwara is located at the edge of River Ravi near the Narowal district, deep inside Pakistan’s Punjab province, and holds massive importance for the Sikh community — Guru Nanak ended his missionary travel at this very place.

According to historical accounts, this was the place where Guru Nanak brought, assembled and settled the Sikh community. It was also this very spot where Guru Nanak died on the September 22, 1539.

For decades, Indian Sikh pilgrims, who come for Darshan at the Gurdaspur Gurdwara, come to the border and pay their respects to Darbar Sahib, standing at the edge of the border. But with the ongoing tensions between India and Pakistan reaching boiling levels, hopes of the border opening have become weaker still.

Of course, Pakistan’s federal minister for Information and Broadcasting Fawad Chaudhry claimed that Pakistan is maintaining its offer to open Kartarpur border. This was the very spot where Guru Nanak died on the September 22, 1539. (Photo: Twitter)

“Even after so much has been said by India against our Prime Minister with insane reasons to cancel Foreign Minister level meeting, we are still ready to open Kartarpur border. However, it should be India that should write an application to Pakistan on Kartarpur as it is their citizens that are going to be entering Pakistan through Kartarpur”, maintained Fawad Chaudhry.

On the other hand, the Sikh yatris in Pakistan wait anxiously, looking ahead towards Pakistan and India, with hopes of being able to see others cross the border and attend the birth anniversary of Guru Nanak later this year.

“Opening of the border for the yatris will be great news. We would be ready to welcome them here with open arms. I can assure this much that they will come with a message of peace and love because Guru Nanak and the particular Gurdwara Darbar Sahib in Kartarpur is a symbol of peace and love for all”, said a local Sikh man at Kartarpur Gurdwara.

#Guru Nanak, #Pakistan, #Sikhs, #Kartarpur sahib gurdwara
The views and opinions expressed in this article are those of the authors and do not necessarily reflect the official policy or position of DailyO.in or the India Today Group. The writers are solely responsible for any claims arising out of the contents of this article.