In Tamil Nadu, the sentiments and the emotions that run for leaders is unparalleled.

It was a day of mourning — tears flowed freely, and slogans rent the air as DMK president M Karunanidhi, who passed away at age 94, was laid to rest with full state honours on the Marina Beach. People turned out in thousands to pay their tributes.

As family members sobbed and leaders of political parties watched, the casket containing the mortal remains of one of the most towering figures in contemporary Indian politics was lowered into a grave next to the memorial of his mentor and DMK founder CN Annadurai. The casket had an inscription in Tamil that read: “the one who slogged all his life without rest, rests here”. Hordes of people lined the roads to catch a last glimpse of the man who had dominated Tamil Nadu politics and given regional parties a say in the corridors of power in Delhi. During the course of his 75-year long career, Karunanidhi, endearingly called as Kaliaignar, served five terms as chief minister and lead the DMK for 50 long years.

A fortnight back, Tamil Nadu got restive when news broke of a sudden decline in the health of former chief minister. Thousands of party cadre and his supporters flocked to the hospital where Karunanidhi was admitted.

In India, people are usually sympathetic towards their leaders who suffer from ill health, but in Tamil Nadu, the sentiments and the emotions that run for their leaders are unparalleled. So much so that the supporters even go to the extent of taking their own lives. Karunanidhi's political heir and DMK’s current president MK Stalin has also said that at least 21 diehard fans of Karunanidhi could not tolerate their leader getting admitted to the hospital.

This is not the first instance of an unimaginable reverence people of Tamil Nadu have shown for politicians, film stars, and celebrities leading a public life. Prominent people like K Kamraj, CN Annadurai, Dravidian social reformer EV Ramasamy — popularly known as Periyar — and film star Shivaji Ganesan have had a huge fan following in the southern state and from time to time there has been an outpouring of emotions for such personalities.

In the year 1984 when MG Ramachandran was admitted to the hospital, the entire state had come to a standstill. Millions of people thronged to the hospital and prayed for his health. Such unprecedented public sympathy is not only confined to prominent people from film fraternity and political arena. The state saw a galaxy of people during the funeral of India’s former president Abdul Kalam.

This is all because Tamil Nadu's politics is an ideally a mixed form of cinema and literature. Here the Tamil language is deeply entrenched in the state’s regional identity and its culture. This is a state which not only believes in, but also practices the idol worship of a human being. However, an outpour of emotion and sympathy varies from one caste to another. Periyar, Kamaraj and Annadurai, were worshiped as they brought about a social change in the state, and for Shivaji Ganesan it was cinematic frenzy. 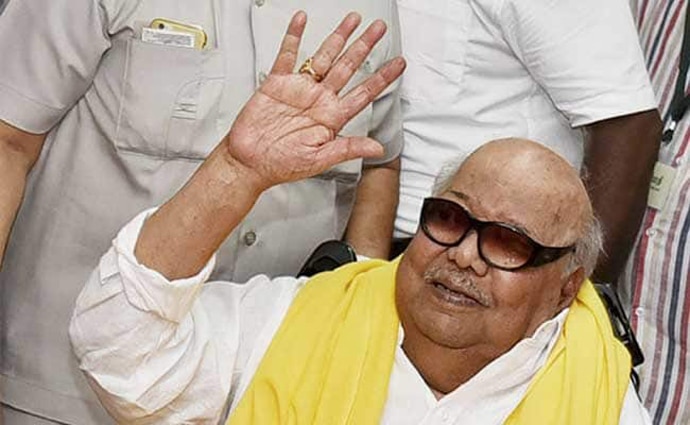 MG Ramachandran (MGR) was a great actor, who adeptly utilised the silver screen to spread his political message. About two years ago when J Jayalalithaa was admitted to the Apollo Hospital after her failing health, even then people had shown a similar impulse. People’s love for Jayalalithaa was due to her charitable work. She is credited with distributing clothes and food to the poor and initiating several welfare schemes.

Her supporters saw in her the image of their mother and therefore called her "Amma". When MGR had passed away, a war of succession within the party did take place, but it ended after Jayalalithaa was anointed and accepted as MGR’s political heir. But Jayalalithaa had not chosen any successor. And her close aide and friend Sasikala Natarajan, who tried to usurp her legacy, was not only stopped from doing so but had also become a laughing stock.

Like MGR, Jayalalithaa too became a successful politician who came with a film background. Both enjoyed huge support of the people. But there was no ideology of the AIADMK that was founded by MGR and nurtured by Jayalalithaa. MGR did many things, which were contrary to the Dravidian ideology.

He did not raise any objection when the Centre sacked the NTR government in Andhra Pradesh. He also turned a blind eye to non-Hindi issue and even stopped talking about regional identity. The anti-Brahmanical protest did not survive for long, because Jayalalithaa was herself a Brahmin.

The story of Karunanidhi is a little different. He started as a humble worker of the party and then later became a powerful leader of the DMK. In the early 1950s, he became the torch-bearer of Dravidian ideology and subsequently camaflouged all his opponents, including MGR and usurped the chief minister's chair.

Unlike MGR or Jayalalithaa, Kalaignar was not a film star, but since he scripted films, he was definitely associated with the film world. He wrote scripts for many films that proved to be superhits. He led a cadre-based party which was firmly attached to the Dravidian ideology, carried forward the agenda of regional autonomy, Tamil nationalism, non-Hindi and non-Brahminism. However, with time, as he aligned with other political parties and came to power at the Centre, he too got detached from these core issues.

The chief minister’s chair also raised some difficulties for him. In spite of this, Karunanidhi was not only a mass leader, but also a connoisseur who had the ability to read the situation very well that came his way. This was the power of Karunanidhi, who not only attracted party cadres, but also leaders ranging from the President to the Prime Minister, to the Opposition leaders and chief ministers.

It would be no exaggeration to say that with the demise of this Dravidian doyen, the era of hero worship has also come to an end.

Post your comment
#MG Ramachandran, #DMK, #MK Stalin, #Tamil Nadu
The views and opinions expressed in this article are those of the authors and do not necessarily reflect the official policy or position of DailyO.in or the India Today Group. The writers are solely responsible for any claims arising out of the contents of this article.