Karwan-e-Mohabbat 2018: The fear you might be killed because of religion

Dispatches of Harsh Mander who is on a journey across India to raise awareness about lynchings and hate crime.

Troubled by the rising tide of hate across India unabated as we entered the New Year, we resolved to continue the Karwan-e-Mohabbat through all of 2018, and if necessary then longer. We would take our Karwan to at least one state every month, visiting the homes of families hit by acts of hate violence.

There once again, as we did in our travels to eight states in September 2017, we would tell the families that they are not alone, that there are many in the country who care and who suffer with them. We would seek their forgiveness on behalf of the country we have made together, and try to assist them in ways we can in their unequal struggles for justice and healing. We also resolved that we would continue to tell their stories to the rest of the country, for not just solidarity, but to appeal to conscience.

We began the year with a journey into Bengal. My colleagues went to Bashirhat on 24 January 2018. I could not join them in this first half-day of the journey, as I was in Assam (working with the National Human Rights Commission looking at the problems of persons declared foreigners and confined for years in detention camps with no end or hope in sight).

But I joined them in the evening in Kolkata, and together we caught a night train to Malda. There was in the Karwan this time a smaller group of around 20 very fine people, senior and young journalists and writers, lawyers, a photographer, a trade unionist, an amateur filmmaker, researchers, students and rights and peace workers.

For me, it was fitting but emotionally wrenching to start this year’s Karwan with a visit this morning to the home of Afrazul Khan, the migrant worker whose life had ended at the end of last year in a particularly brutal hate killing.  I had gone days after he was bludgeoned, hacked and then burnt alive, assiduously filmed by a teenager on 6 December 2017 to Rajsamand in Rajasthan as part of a fact-finding exercise.

We learnt there that Rajsamand district, like many parts of Rajasthan, is served by thousands of circular migrants from Malda in West Bengal, mostly Bengali Muslim workers skilled in construction and road-building. They live lonely lives of hard labour some ten months every year far away from their families and home, to feed and educate their families. Just four days after the killing, most of the workers had fled home in terror. We had met in Rajsamand Afrazul’s son-in-law, who the police had asked to stay and assist with the investigations. I had resolved then that the Karwan must visit Afrazul’s family in Malda.

This morning, we passed mustard fields in flower and freshly transplanted paddy fields, before we wound our way through narrow lanes to Afrazul’s home in Saiyadpur village of the district Malda. Due to his long years of hard labour, his family lived in a pucca brick home. Led inside, we met his widow Gulbahar Bibi, and his three daughters. He had no sons.

We explained to his family who we were, and what our mission was. Her elder son-in-law Musharraf, who we had met in Rajsamand after the murder, recognised us. Afrazul’s widow Bibi was composed, her face strained, breaking down only occasionally. She said they wanted nothing now except the hanging of the man who killed her husband so cruelly, for no reason except his religion.

She and her daughters fondly recalled their father, who had devoted his entire life to their care. He had educated all his daughters and married off the elder two. The youngest Habiba Khatoon, 16 years old, was in Class 10 and wanted to study further. A private residential school had given her admission after her father’s cruel death. 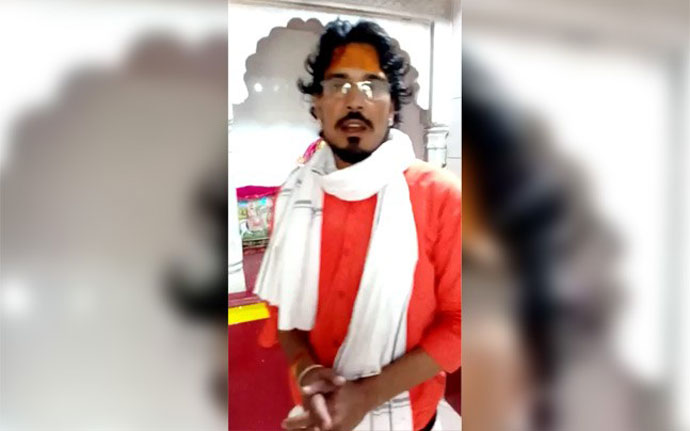 Afrazul would come to see them every few months and stay a few days or weeks each time. He had come to them last during the festival of sacrifice, Eid ul Zuha. But even the morning he died, he had called his wife according to his custom, at 8.30 in the morning. He had asked after his beloved daughter - had she gone to school? His wife asked him, in turn, had he eaten. He said he would come to see them at the village at the end of that week. This was the last time that they spoke.

His eldest daughter Jyotsnara Begum wept as she repeated, "My father was a good man. We have no brothers. There is no one to take care of us now. I want that his killer should be hanged". I tried gently to tell them that I agreed that he deserved severe punishment (although I believe no one should be given the death penalty). But I said I felt that even far more than him, the people, the organisations, and the leaders – up to those who hold high offices – are the ones who are even more guilty than him because they have fostered the hate that blinds men like their father’s killer. I told them a little about what I had learned about the man who had killed their father. (We had visited his family as well when in Rajsamand).

We left them with our eyes moist.

Outside Afrazul’s home, a large number of men from the village had gathered. Most said that they were circular migrant workers. "We have little or no land here. There is very little work to be had in agriculture. There are no factories. We can stay alive only if we travel to far corners of India in search of work". We asked how much they earned. They said they managed to save six or seven thousand rupees a month which they sent home. They know that they should be registered as inter-state migrants, and be given many protections and services, but none of these came their way.

Many had returned in droves from Rajasthan after Afrazul’s killing and were still too frightened to go back there to work. They said that they had never faced violence in Rajasthan before this. "But after all the killings of Muslims that we see all over India these days, we have started living with fear. We never know who will attack us, and where". But they know they will have to set out one day soon again, otherwise, their families will starve, and they would not be able to educate and marry off their children. "If not Rajasthan, we will have to find another part of India to travel to in search of work".

We made one more halt in the same district, in another village Sharikganj to meet another bereaved family. But this was a more ambiguous meeting. Over one month after Afrazul’s hate killing, another Bengali migrant from Malda, again in Rajasthan in Jaipur, was found killed in his room. He was working in the tent business, one more field that has attracted a number of migrants from Malda. Some ten days before our visit, his body was found mutilated in his room in Jaipur, a limb severed and damaged with acid.

No one knows why he was killed, and by whom. He could have been killed by his enemies for other reasons than religious hate. But the worry is that just as Afrazul’s body was found similarly savaged and mutilated if his killer had not had the murder videographed, the same mysteries would have surrounded his murder as those of this migrant worker Sakir Ali.

It is hard enough to be forced to spend most of your adult life toiling at low and uncertain wages without a decent room or food or the company of your loved ones in lonely, faraway lands. If now you also have to live with the fear that you might be killed just because of your religion, just trying to survive for those you love becomes an enterprise so fraught and dangerous that it becomes hard to bear.

#Rajsamand, #Afrazul Khan, #Hate Crime, #Bengal
The views and opinions expressed in this article are those of the authors and do not necessarily reflect the official policy or position of DailyO.in or the India Today Group. The writers are solely responsible for any claims arising out of the contents of this article.