How politics is fanning the communal flames in Kasganj

A few people from a particular community seems to have been given a free hand by the administration, allowing them to go on a rampage against the minorities.

"Hindustan mein rehna hoga toh Vande Mataram kehna hoga (If you want to live in India, you have to chant Vande Mataram)," screamed ABVP activists as they took out a "Tiranga Yatra" through the streets of Kasganj on January 26.

Kasganj is a Muslim-majority town in Uttar Pradesh whose chief minister, Yogi Adityanath, has vowed to end the long history of violence and riots in the state. At least, that was his poll promise of "na goondaraj, na bhrashtachar (freedom from goons and corruption)" to the state.

However, this year's Republic Day clashes tell a very different story altogether. As residents of Kasganj, belonging to different communities, began preparing for the 69th Republic Day celebrations, a group of ABVP and VHP cadres set out on a bike rally. Passing through every mohalla, they finally reached Baliram Gate. This group, which had no police permission, was also carrying saffron flags - enough to instigate a communal outburst.

As they approached the minority-dominated area, their slogans grew louder. Soon, what started out as a verbal spat turned into a violent clash with both sides throwing stones at the other. One man reached for his gun and fired in frenzy which hit 20-year-old Chandan Gupta, killing him two hours later. Another man, Naushad, was also hit in the leg by a bullet and is now recovering at an Aligarh hospital. 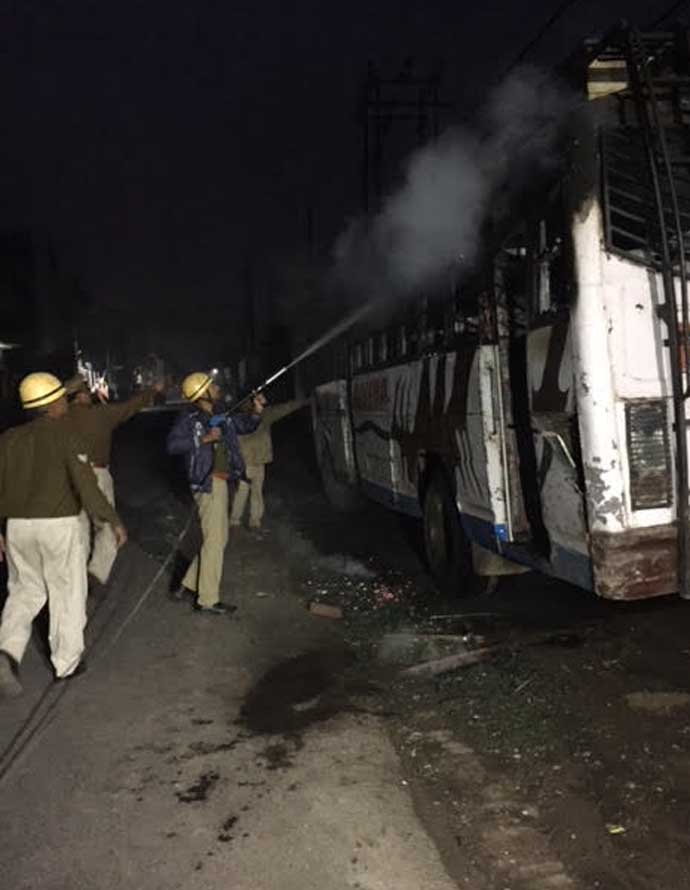 Fire brigade personnel trying to douse the flames after a bus was set afire on January 27. 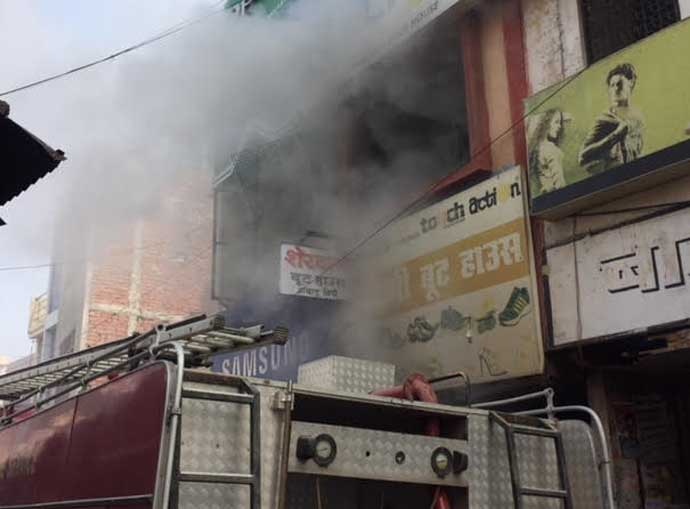 This was enough to trigger the mob, which went on a rampage across the town. The district police force was in Etah for the Republic Day parade as the town erupted into flames. A mosque was set ablaze and the police, in an FIR, said stones were hurled and bullets fired on them as they tried to quell the commotion.

By afternoon, Yogi's promise of "na goondaraj" was blown into pieces as shops and buses burning to cinders became the image of Kasganj.

The police, unable to control the situation, imposed curfew to restrict mob movement. One company of Rapid Action Force (RAF) and five companies of Uttar Pradesh Provincial Armed Constabulary (UP-PAC) along with police forces from adjoining districts were deployed in Kasganj. The district magistrate, inspector-general of police, commissioner of Aligarh and at least half a dozen other IPS officers from adjoining areas were deputed to control the surging violence. But all these measures had no bearing on the rapidly deteriorating condition of Kasganj.

Around 9.30pm, Lakhimpur resident Mohammad Akram, unaware of the violence, was on his way home with his pregnant wife in a Tata Safari. As he reached Kasganj, the mob attacked his car. They broke the windows with bamboo sticks and almost gouged out his left eye. "They saw my beard and attacked me. My wife is expecting and the delivery is scheduled for tomorrow," Akram said, his face covered in blood.

Akram was attacked in the middle of the town, Agrasen Gate, and the police was absolutely unaware of the situation. Fortunately, the local correspondent of Aaj Tak, Devesh Pal Singh, who was present there informed a senior police officer even as he recorded a video on his mobile phone. By this time, the mob had already put kerosene on Akram and his pregnant wife in an attempt to burn them alive. The senior officer responded swiftly and sent his forces just in time to save them. Akram is now recuperating in a hospital. 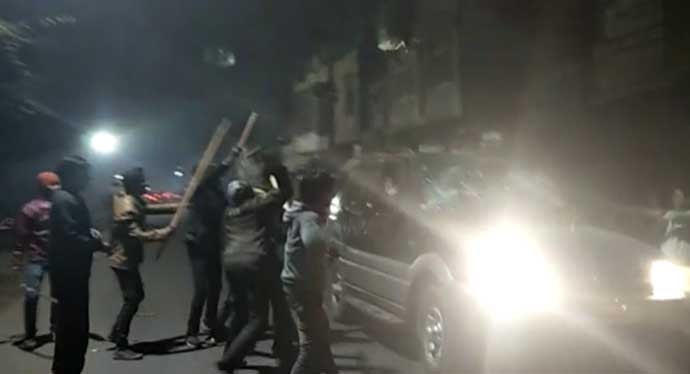 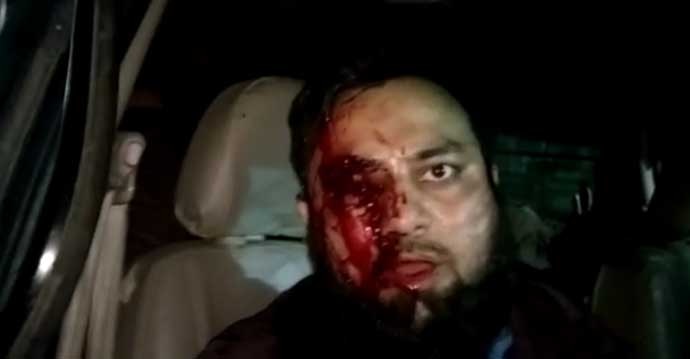 Mohammad Akram was left with a bleeding eye following the attack.

Just 50 metres from here, BJP MP Rajveer Singh, along with a few other legislators, district magistrate and police officers were at the residence of Chandan Gupta, requesting them to cremate Chandan's body, but the family was struck to their demand of "status of martyrdom" for their dead son. The deadlock ended around 2am after the family was given verbal assurance of a government job to a family member and Rs 50 lakh as compensation. However, three days after his death, Chandan's family has received a cheque of Rs 20 lakh.

On January 27, Chandan was cremated in the morning and even as his mortal remains were set on the pyre, Kasganj continued to burn. Around 200 meters from the cremation ground, one bus and a shop were set on fire while some locals vandalised a garage. Minutes later, three more buses and three shops were set ablaze by them. All the shops and vehicles were owned by the local Muslim population who till one day ago were living peacefully with the Hindus.

What was shocking was that these incidents were taking place within a range of 500 metres from where hundreds of policemen and two companies of paramilitary forces were standing guard. The charred remains of a shop that was set on fire on January 27. (Photo credit: Munish Pandey)

As we witnessed, it appeared that a section of the locals belonging to a particular community were given a free hand by the local administration, allowing them to go on a rampage against the minorities.

Parliamentarian Rajveer Singh in a statement to us blamed the Muslims for the clashes. "Muslims are responsible for this incident. It was pre-planned and they will be dealt with strict action," he said. Virendra Tomar, VHP leader, said, "It's time for us to give a fitting reply to "love jihad". If they kill one of us, we will kill 10 of them. The police is our servant and they will work on our instructions."

After several incidents of violence since the morning of January 27, the mob, led by a local VHP leader, took on the policemen. With no courage to face the crowd, a senior police officer called a VHP leader and requested him to ask their cadres to vacate the streets. The VHP leader agreed to the officer's request, but while walking away, he warned the police that within 48 hours, they will ensure that Kasganj is on fire. The political conspiracy was quite clear following the clashes which started on January 26. Now, there was only pressure from the innocent locals and media on the administration and police officers to act.

On January 28, when we confronted the suprintendent of police, Sunil Singh (who has now been transferred), as to why they failed to control the situation, he categorically said, "This is being done on the instructions of a few people (higher-ups) and I cannot rule out any political conspiracy." His statement on camera probably cost him his job as he was transferred from Kasganj.

Politics over Kasganj violence is at its peak with BJP and VHP leaders making controversial remarks, and parties like the Congress and the Samajwadi Party blaming the BJP for polarisation for the upcoming elections. In this political tussle, the ones suffering are the common people. Situated on the banks of Kala Nadi (Black river), most of the population in Kasganj is dependent on daily business for their survival. With a population of little above one million, Kasganj district has approximately 66 per cent Hindus and 33 per cent Muslims. And in last one decade, there has been no incident of any communal violence.

Five days on, Kanganj continues to simmer while politicians are busy trying to cash in on communal sentiments.

Also read: We live in a dark and depressing world where 8 month old infants are raped and brutalised

#Republic Day, #Mohammad Akram, #Yogi Adityanath, #Kasganj violence
The views and opinions expressed in this article are those of the authors and do not necessarily reflect the official policy or position of DailyO.in or the India Today Group. The writers are solely responsible for any claims arising out of the contents of this article.