Is New Delhi willing to reverse time for a solution in Kashmir?

In the Valley, the dominant political sentiment is for complete independence from both Pakistan and India.

Saifuddin Soz, a veteran Congress leader and former Union minister, may have ruffled some feathers in New Delhi by favouring former Pakistan president Pervez Musharraf's four-point Kashmir formula and making a case that the 1952 Delhi Agreement could well be merged with the four-point formula to find a pragmatic solution to the Kashmir dispute.

Has Soz ended up stirring a political hornet's nest or is this something that New Delhi should seriously consider to restore some trust and confidence in Kashmir?

Nyla Ali Khan, a Kashmiri academic based in Norman, Oklahoma, USA, explains it in these words:

"Broadly, in October 1949, the Constituent Assembly of India reinforced the stipulation that New Delhi's jurisdiction in the state would remain limited to the categories of defence, foreign affairs and communications, which had been underlined in the Instrument of Accession. Subsequent to India acquiring the status of a republic in 1950, this constitutional provision enabled the incorporation of Article 370 into the Indian Constitution, which ratified the autonomous status of Jammu and Kashmir within the Indian Union. The subsequent negotiations in June and July 1952 between a delegation of the Jammu and Kashmir government led by Sheikh Mohammed Abdullah and Mirza Afzal Beg, and a delegation of the Indian government led by (Jawaharlal) Nehru resulted in the Delhi Agreement, which reinforced the autonomous status of Jammu and Kashmir." 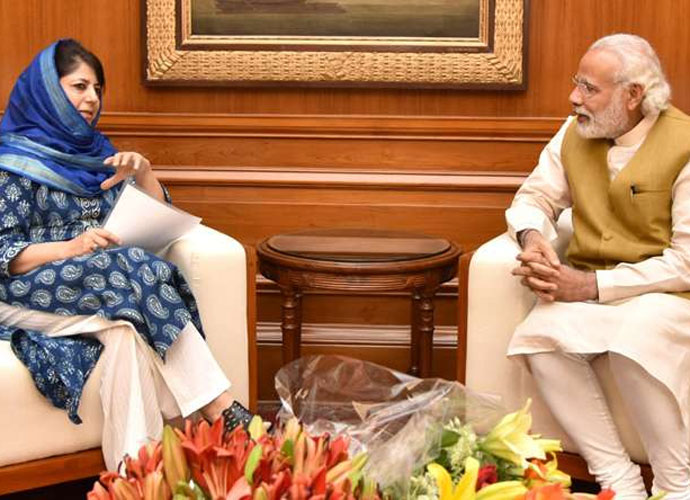 Jammu and Kashmir's oldest political party, the National Conference (NC), passed an autonomy resolution in the Jammu and Kashmir Assembly on June 26, 2000. The resolution was adopted by voice vote after accepting the report and recommendations of the State Autonomy Committee (SAC).

To understand why Soz's support, albeit in his personal capacity, for the four-point Kashmir formula has annoyed the BJP, one should not lose sight of the context and ideological divergence between the two parties. The NC's autonomy resolution of 2000 had "shocked" the BJP.

LK Advani, former deputy prime minister of India, in his autobiography My Country My Life, while talking about the NC's autonomy resolution in a chapter entitled "Dealing With The Kashmir Issue" writes: "The nation was shocked on June 26, 2000, during the Vajpayee government's rule in New Delhi, when the Jammu and Kashmir Assembly adopted a report of the State Autonomy Committee (SAC) and asked the Centre to immediately implement it. The SAC recommended return of the constitutional situation in Jammu and Kashmir to its pre-1953 status by restoring to the state all subjects of governance except defence, foreign affairs, currency and communication."

Subsequently, the BJP-led NDA Union cabinet, in its meeting on July 4, 2000, rejected the NC's autonomy resolution passed by the Jammu and Kashmir Assembly.

On the same day, Advani adopted a hawkish stand on the issue and told the media that accepting the Jammu and Kashmir Assembly's autonomy resolution will "set the clock back".

This was how the BJP rejected a demand which had come from an institution no less than the Jammu and Kashmir Assembly.

But then, successive governments in New Delhi have always undermined and discredited this institution through a string of broken promises, electoral fraud and rigging. That's why there exists an enormous trust deficit between New Delhi and Srinagar.

Some experts and key Kashmir watchers have been arguing that there are no "magic bullet solutions" to Kashmir; some have termed it as an intractable dispute while others claim that only a statesman-like leadership in India, Pakistan and Kashmir, with strong political will, can actually resolve the Kashmir dispute once for all.

In this situation, what could be the ideal solution? Does such a leadership exist in Pakistan, India and Kashmir which is prepared to think "out of the box"? Will the people of Kashmir accept anything short of azadi?

Fundamentally, there are three stated positions. India considers Jammu and Kashmir its "atoot ang" (inseparable limb) and through a parliamentary resolution of February 22, 1994 also lays claim to the part of Kashmir administered by Pakistan since 1947.

Pakistan, on its part, while laying claim to the part of Jammu and Kashmir administered by India, calls it its "shah rag" (jugular vein).

In Kashmir, however, the dominant political sentiment is for complete independence from both Pakistan and India. The 'Outlook' poll of October 1995 and the recent Chatham House survey have shown this to be the case. Though there are sections in the Kashmir Valley which favour merger with Pakistan while a few are happy with status quo.

Even regional parties like the NC and the People's Democratic Party (PDP), which do not strongly challenge Jammu and Kashmir's constitutional relationship with the Union of India, are also pro-resolution.

Both are dissatisfied with the existing state of affairs. The NC bats for greater autonomy, the pre-1953 status, while the PDP favours self-rule for erstwhile Jammu and Kashmir under the joint mechanism of Pakistan and India.

This brings us to Musharraf's four-point formula.

Khurshid Mahmud Kasuri, Pakistan's foreign minister from 2002 to 2007, in his memoir Neither A Hawk Nor A Dove argues that no solution to the Kashmir dispute can be "perfect" from the point of view of Pakistan, India or the Kashmiris.

"It would have to be the best possible under the circumstances."

The moot question is: does such a solution exist? A solution that is honourable, implementable, palatable and politically acceptable to all stakeholders? How far can India go? How much will India concede? How much flexibility will Pakistan exhibit? Will it satisfy the Kashmiris?

Kasuri writes that India and Pakistan have recognised that there are "forces" in both countries that don't like normalisation of relations, and there are also people who wouldn't settle for less than a "maximalist solution".

But the broad contours of a feasible agreement on Kashmir, according to Kasuri, are demilitarisation and reduction in violence, self-governance, a joint control mechanism for both parts of the state, and rendering of the line of control (LoC) as just "a line on the map".

In other words, it is the four-point formula proposed by Musharraf.

Such a solution could well be palatable to Pakistan and India as both appear more or less convinced that "the boundaries can't be redrawn" and territorial sovereignties should not be challenged.

But will it be acceptable to Kashmiris? While the four-point formula does provide a certain "sense of achievement" to a section of Kashmiris, it falls way short of satisfying their larger political aspirations.

Most in the Kashmir Valley would, therefore, see de-militarisation, self-governance, joint control, cross-LoC travel and trade only as steps and confidence-building measures towards a settlement, not the final solution.

Musharraf's four-point formula drew scathing criticism from the most popular Hurriyat leader, Syed Ali Shah Geelani. In Geelani's words, Musharraf had "lost his mental balance" while proposing such a formula. However, the Srinagar-based head priest, Mirwaiz Umar Farooq, had favoured the formula as a "good beginning" for a lasting solution.

Given the intensity of the current mass uprising in the Kashmir Valley, following the killing of the tech-savvy Hizbul Mujahideen commander Burhan Wani on July 8, it is in New Delhi's own interest to "set the clock back" to find a meaningful solution to the Kashmir issue.

The all-party delegation that is due to arrive in Srinagar on September 4 must not repeat the same mistakes that previous delegations have made in 2010. It must come with an open mind and enter into a sincere dialogue with all stakeholders, especially the Hurriyat and Jammu Kashmir Liberation Front (JKLF), without putting conditionality.

As a senior Congressman Soz insists, "History does not give opportunity, again and again."

Also read: Are intellectuals supporting Kashmir's cause all Pakistan-sympathisers?

#Narendra Modi, #India-Pak, #Kashmir
The views and opinions expressed in this article are those of the authors and do not necessarily reflect the official policy or position of DailyO.in or the India Today Group. The writers are solely responsible for any claims arising out of the contents of this article.