J&K: How the political mainstream is playing with competitive separatism

On September 8, former Jammu and Kashmir (J&K) chief minister and National Conference (NC) chief, Dr Farooq Abdullah, threatened to “boycott” Parliamentary and Assembly elections if the Government of India did not make clear its stand on Article 35A and Article 370. One of the senior-most political leaders, Farooq Abdullah, has started threatening the Centre with poll boycotts. (Photo: PTI/file)

While Article 35A of the Indian Constitution allows the J&K legislature to define the “permanent residents” of the state and provide them special rights and privileges, Article 370 grants special autonomous status to J&K.

Dr Abdullah was addressing party workers on the occasion of the 36th death anniversary of NC founder and his father, Sheikh Mohammad Abdullah, when he made the comments.

This comes after the NC, on September 5, announced it was not willing to participate in the upcoming multi-phase panchayat and urban local bodies (ULBs) elections, announced by the new J&K Governor, Satya Pal Malik. 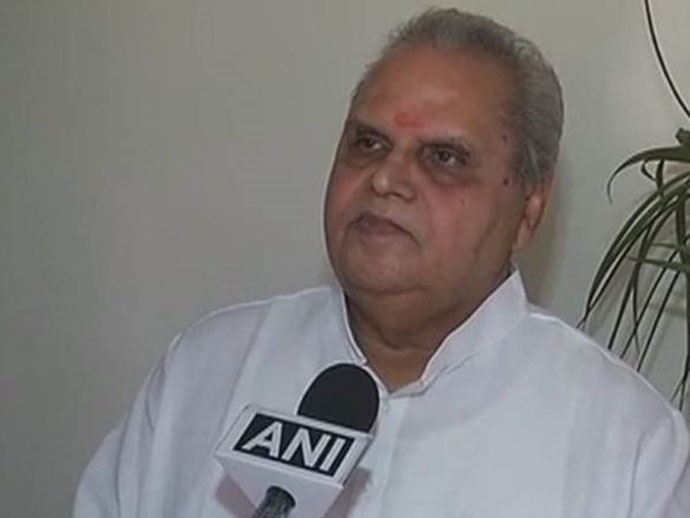 The decision to hold elections to urban local bodies and panchayats was taken by Governor Satya Pal Malik on August 31. (Photo: ANI/file).

ULB polls are to be held in four phases, from October 1 to October 5, while panchayat polls would be conducted in eight phases, from November 8 to December 4.

Article 35A has become a major point of confrontation between Srinagar and New Delhi.

On August 31, the Supreme Court of India deferred the hearing of petitions challenging it to the second week of January 2019, after both the Centre and the state governments argued that it could trigger a law and order problem in Jammu and Kashmir ahead of the planned local body polls.

Whether the apex court should keep deferring the case over apprehensions of “law and order” is altogether a different debate.

Adopted on November 17, 1956, the Constitution of Jammu and Kashmir defines a “Permanent Resident” of the state as a person who was a state subject on May 14, 1954, or who has lawfully acquired immovable property in the state and has been a resident in the state for not less than ten years.

Article 35A was incorporated into the Constitution in 1954, under Article 370, through an order by then-President of India, Rajendra Prasad, on the advice of the Union Government, headed by Pandit Jawaharlal Nehru.

Speaking from Sheikh Abdullah’s graveyard at Naseem Bagh, Hazratbal, in Srinagar, Dr Abdullah on September 8 said, “On one side, you are saying elections. On the other side, you want to erode Article 35A and attack the Constitution. How can we go to the people and ask them to come out and vote? First do justice to us and clear your stand. If your plan is that (weakening of Jammu and Kashmir's special position), then our ways are separate. Then we cannot have elections with you. Not only these polls (Panchayat and ULBs), but we will also boycott the Assembly and Parliamentary elections then. Clear your stand on Article 35A and Article 370 before the nation.”

This was the same Abdullah who recently chanted “Bharat Mata Ki Jai” and “Jai Hind” while paying tribute to former prime minister Atal Bihari Vajpayee at an event in New Delhi.

For this, he was heckled during Eid prayers at Hazratbal mosque on August 22, as people shouted slogans of “Farooq Abdullah, go back” and “Hum kya chahte, azaadi”.

When the grand old party of J&K announced the decision of its poll boycott, how could its arch rival stay behind?

Now, the Peoples Democratic Party (PDP) has also said it will stay away from the polls as long as the Centre doesn’t clear its position on Article 35A and on the security situation in the state.

The central government’s plea in Supreme Court to link decision on 35A with panchayat and urban bodies elections , was a disastrous idea, which has further alienated the people and complicated the situation on ground .

Very recently, PDP chief and former J&K Chief Minister Mehbooba Mufti had said that if there was any tinkering with Article 35A or Article 370, it would be “very difficult to uphold the national flag” in the state.

There are no two opinions about the worsened security situation in Jammu and Kashmir, especially in the Valley.

Whether the polls should be deferred due to the prevalent turbulence, and for how long, has to be discussed and decided. Mehbooba Mufti has said it will be difficult to hoist the national flag in Kashmir if Article 35A and Article 370 are tampered with. (Photo: PTI/file)

However, the task of the political mainstream is to attempt the strengthening of democracy in J&K. Instead, both the regional parties are resorting to undemocratic ways of threatening the Centre. This is for the first time in the past three decades that both the mainstream political parties are calling for a boycott of elections vociferously — with the state’s oldest political party, the NC, itself putting an embargo on the democratic process.

J&K Congress Chief Ghulam Ahmad Mir has criticised the NC for its stand, but has also expressed doubts over the holding of the polls in view of the grim law and order situation. The state Congress will give an official decision after its meeting on September 11.

Bharatiya Janata Party (BJP) General Secretary Ram Madhav has slammed Farooq Abdullah, and said, “Farooq Abdullah has always done politics and never made efforts to ensure democratic rights of people. Now when Modi ji is trying to do so, he is speaking against it. If Farooq Abdullah is objecting to panchayat polls over 35A issue, then why did he contest Kargil polls?”

Those who have been following J&K politics and the related conflict would know that separatist groups have been calling for the shunning of elections since 1990.

Spearheading the anti-India movement, the Joint Resistance Leadership (JRL), which comprises Syed Ali Shah Geelani, Mirwaiz Umar Farooq and Mohammad Yasin Malik, has been peddling, over and over again, the false narrative of J&K’s demographic alteration by the Indian state.

Recently, the JRL had given a shutdown diktat in Kashmir over the Article 35A hearing in the Supreme Court. While Kashmir witnessed protests over any attempt to dilute Article 35A, Jammu is joining the chorus for the removal of the Article.

The mainstream political parties in the J&K state, especially the Kashmir-centric ones, seem to be striving to outdo the separatist outfits over Article 35A, Article 370, civic polls, etc. Competitive separatism has become the political mainstream’s pastime, through which they fuel the fire of popular separatist sentiment.

By boycotting elections, the political mainstream is furthering the agenda of the separatists, who keep saying that participation in elections is hogwash, and demand the right to self-determination for J&K.

The political mainstream siding with the separatists, this time over polls, is going to put a question mark on the credibility of the democratic process of elections, and augment the political uncertainty in the state, under Governor’s Rule since June.

The political parties in J&K are being irresponsible in their utterances and demeanour. If there is a concern over the electoral process in the state given security, it could have been articulated in a better way, not through warnings. Unfortunately, nobody in the state wants to hold a debate over the said Articles and discuss their intricacies. Instead, there is clamour about “tinkering with the state’s demography” and “attempts to change its identity”.

Now, the mainstream politicians in the state seem to be competing with these three. (Photo: DailyO)

Among other legal contentions, Article 35A is said to be discriminatory as it denies rights and privileges to permanent resident (PR) women marrying men not holding a PR certificate. J&K PR men marrying outside the state, on the other hand, continue to enjoy PR rights.

In a well-meaning democracy, one has the right to knock on the doors of the judiciary if the legislature has failed to remove inequitable biases against certain sections of its citizens.

The so-called 'liberal' voices and woman rights activists in the state as well as the country are making no noise over this discriminatory part of Article 35A.

Interestingly, National Conference leader and former J&K CM Omar Abdullah, who is ever ready to comment on most issues, has also not been clear on this discrimination against women.

In the absence of elected representatives of Panchayat and municipal bodies, J&K is losing central assistance worth Rs 5,480 crore for developmental works under the 14th Finance Commission award.

It has to be seen how the Centre and the new Governor will respond to emerging challenges in the state.

However, the state of affairs in J&K doesn’t seem to be on the path of harmony.

The discord seems set to worsen in the coming days.

#Article 35A, #People's democratic party, #National Conference, #Kashmir local body polls
The views and opinions expressed in this article are those of the authors and do not necessarily reflect the official policy or position of DailyO.in or the India Today Group. The writers are solely responsible for any claims arising out of the contents of this article.