For security agencies, the Hizbul Mujahideen commander was getting under their skin. His online persona enthused youngsters.

On July 8, armed forces hemmed around the stronghold of one of most dreaded militants in Kashmir. They had been gathering intelligence for days, inching themselves ever more closer to the 21-year-old Burhan Muzaffar Wani.

Wani, a boyish and teeming young militant of Hizbul Mujahedeen, it is understood, joined their ranks after security forces harassed him and his brother, rose to emblematise the renewed upsurge of militancy in Valley. He had vowed vengeance.

But on Friday, in a joint action, a team of police and personnel of 19 RR, laid siege round a house in a village in South Kashmir’s Kokernag, triggering gunfight that did not end before Wani and his two associates were done with.

State’s police chief K Rajendra hailed the operation as a “blow” to the militancy. Yet a certain section voiced concern that his death might be a foreboding that signals a tougher time ahead.

While Burhan’s death might set off a political consternation in the Valley, it is unlikely to resurrect that situation that blazed Kashmir in 90s.

For security agencies, Burhan was getting under their skin. His online persona enthused youngsters.

It was because of him that public, grown weary of two decade long agonising turbulence, had embraced the idea of armed insurrection afresh and revered the kind of symbols they had become. Risen from the detritus that the mayhem of 2010 left in its wake, Burhan and his likes had saddled themselves with responsibility to revive the ailing insurgency.

A relook at the string of incidents that happened back to back over the past two or three months seems, indeed, to suggest that militancy has gathered steam.

Two weeks ago, militants mounted audacious attack on a CRPF convoy near the Pampore town in South Kashmir, killing eight personnel and injuring over 27. The Pampore attack caught security agencies unawares and demonstrated militants’ ability to strike at their whim.

Days earlier, they had also ambushed a BSF near Bijbihara in South Kashmir again, killing three of its men. This year witnessed the chilling siege of Entrepreneurship Development Program building near Sempore, barely fewer miles from Srinagar.

The charred and smoke emitted building stood as a testimony how the situation in the Valley was spiraling out of control.

To top this off, militants on May 23 shot dead three policemen in the heart of Srinagar city in the two separate attacks; the first in the summer capital in three years.

It was against this backdrop that home minister Rajnath Singh visited J&K to gauge where the things stood and how far the renewed attempts to reignite insurgency had gone through.

In the month of June only as many as 14 militancy related incidents took place.

Recently, deputy chief minister Nirmal Singh said that there has been a 110 per cent increase in the militant killings while civilian killings had gone down by 11 per cent.

He also decried efforts to revive the insurgency in the Valley. So did observers across the spectrum.

But why is there a sudden spike in the militant violence?

Experts often forge its seamless connection with the alienation that youth are being driven towards. But estrangement had always been there.

Right now, a series of incidents that played out in the recent times merely re-established the yawning gulf existing between Kashmiris and the Indian state, if not actually giving rise to it anew.

The events happened one after the other: Kashmiris had fumed when Zahid Ahmad, a trucker whom religious zealots charred to death on a suspicion of transporting a cow, was brought home.

They were roused to fury again when young Gowhar Nazir died in an alleged CRPF action earlier this year, incidentally on the day when PM Narendra Modi delivered his speech in Srinagar.

Their patience wore thin after the killings of four youth in the aftermath of alleged molestation attempt on a girl by Army personnel in Handwara. 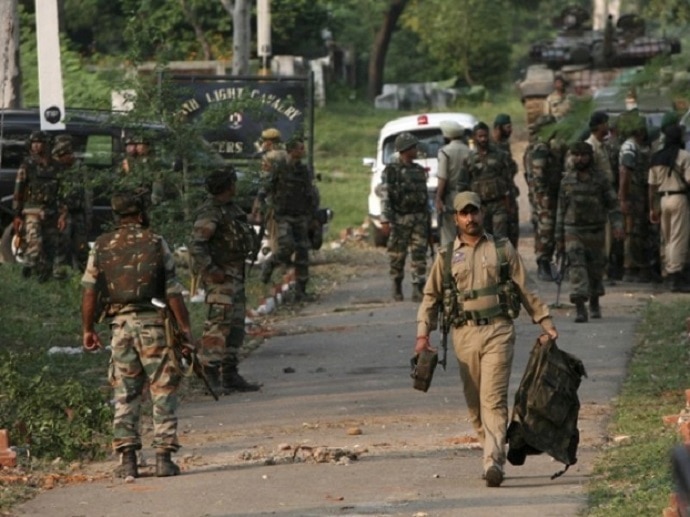 What gives Army and other security agencies an edge over militants is an overpowering informer base.

Watching these events, one could surmise that there was a very fine line between the capacity of locals to both erupt with indignation when a wrongful incident took place and settle down back as if, nothing had happened at all.

A current of dormant angst and disaffection had always flown underneath the veneer of normalcy that often shows up in form of interminable sea of people swarming to partake in the last rites of slain militants.

But there is a flip side as well. If militant funeral draw public in swarms, so does the recruitment rally of Army and police.

Indeed a fresh wave of discontent has rippled out itself across the Valley and has incidentally coincided with a puzzling uptick in the violence that militants carry out. But does it stand to reason to construe the events as an unmistakable sign of a new militancy?

Up until June this year, as many as 70 incidents of militant violence have been reported by the police.

Up to 57 militants have died in forces action till June 15, according to police data.

“The last count that we made suggested that there are some 155 militants remaining in Valley,” a senior police official told me.

The frequency is nowhere close to that of 90s when over a dozen incidents took place in a day. Instead of calling it a renewal, a senior police described the upsurge at best as “slowing down of the pace at which insurgency was sharply tumbling down.”

It is the “aspirational deficit”, he said, that propels them to join the militant ranks.

Army, on its part does not seem to be taken as much aback by the increased militant activity as media and few observers are.

“It’s definitely not a revival although it can be viewed as an attempt,” says Lt Gen Syed Ata Hasnain.

“When militant strength started to fall below a threshold level from 2008 onwards we have witnessed different methodologies to keep the conflict relevant. Increased violence in the street, symbolic attempts to show solidarity with unconnected entities such as ISIS, demonstrations of support to Pakistan, enhanced presence at terrorist funerals and flash mobs at encounter sites are all ways of remaining relevant.

"If some terror attacks have been successful it is more due to carelessness of security forces than effectiveness of terrorists; the inability to follow established SOPs as in the case of the recent Pampore Ambush. Attacks in Jammu sector are a reflection of control of terror and infiltration in Kashmir.”

Gen Hasnain invests the term the Last Mile to explain the sudden swell in the number of attacks.

Last Mile in this case is a parting convulsion that a dying person, who summons all his energies to produce a one final, horrible tremble, suffers before breathing last.

How far are security experts correct in reading the events in accordance with this line?

According to Army sources, firstly, militant attacks have not gone up.

As a matter of fact, they say, the concentration of is usual in this season. “In fact the Army's attacks on militants have increased, not the other way around. In all the encounters in North Kashmir and Shupiyan/Pulwama it is the Army's initiative, not of the militants.”

The attack was hailed as a decisive defeat that security agencies handed down to the militants. “It is precisely why,” sources say, “they are upping the ante to stay afloat in troubled times and give impression that business is going as usual.”

“Even the material for militants has dried up,” Gen Hasnain concurs. “There are no IED Doctors left in the Valley although there is enough explosive going around. Last effective IED was on 20 Jul 2008. You find Burhan Wani's merry men snatching police weapons to make up weapon deficiency.”

This year there have been so far five instances of weapon snatching by the militants.

Recently militants decamped with a service rifle of a Personal Security Officer (PSO) of a BJP leader in Panzan area of Chadoora in central Kashmir’s Budgam district.

Last year, according to police data, there have been eight instances of weapon snatching. Experts say that in wake of tighter control in place at the border, militants are facing extreme difficulty in getting the weapons in.

So in the long run, they opine, it would not be cakewalk for them to keep the frequency of attacks apace. 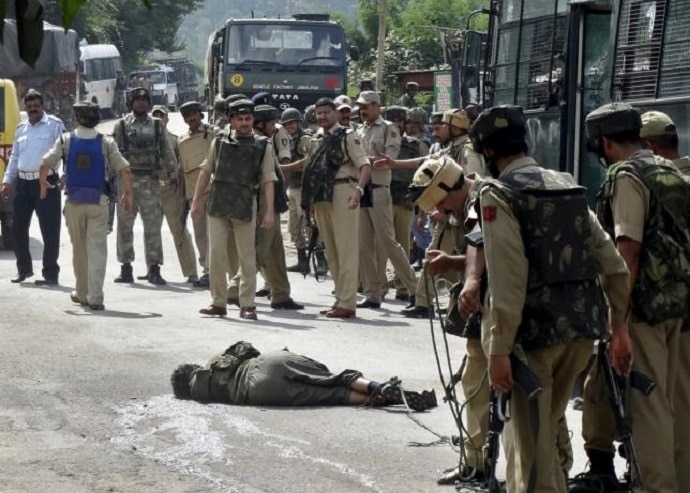 The frequency of militant killings is nowhere close to that of 90s when over a dozen incidents took place in a day.

What gives Army and other security agencies an edge over militants is, according to Army sources, an overpowering informer base.

This was also recently admitted by the region’s police chief SJM Gilani in an interview with media. “We had many successful anti-militancy operations this year, so far. The credit for this goes to our robust intelligence grid and our very strong informer base,” he had said. “Our main aim is to keep the militants on the run and not allow them to settle at one place. This helps us to zero in on them very easily.”

Perhaps that is why militants have also upped the strikes against the locals who are believed to be informers.

Army sources have also said that with the upgradation in Army’s reconnaissance abilities and its capacity to thwart infiltration, it has had a direct bearing on the militants who are now desperate to mount attacks upon attacks to make their presence felt and indicate that they are thriving even as in reality they have “suffered tremendously.”

“The Army has better tactics than before (developed over time) but its equipment is what it has had since 2002. Perhaps intelligence is of a higher order because of interception techniques,” Gen Hasnain agrees. “If you notice in most cases terrorists are escaping the LoC Fence dragnet and getting intercepted at the second tier in Rajwar and Hafruda or Lolab forests.

"The RR is doing a great job. The Army must go on a fast track acquisition of more surveillance equipment.

"UAVs have not been as successful as they could be but they are being employed.”

But with Burhan now weeded out, it has to be seen if it does not become to rallying point for making new recruitments.

There is a general worry among police and security officials about the aftermath that his departure is going to herald. Omar Abdullah tweeted on Saturday:

Mark my words - Burhan's ability to recruit in to militancy from the grave will far outstrip anything he could have done on social media.

But a senior police official played down such fears.

“Throughout his life as Hizb militant, he was not able to mount a single attack against security forces,” he said. “Normally they recruited up to 10 cadres year, now it will just grow up to 15. That’s it.”

Even as we speak, a carnage is unfolding in parts of South Kashmir where action by forces have led to the killing of almost six persons. More deaths are expected. In coming days, we might see a bloody specter of violence that might claim more lives.

Socio-political order might as well break down completely. Tragic as it may, it would be still far from rekindling the kind of political turbulence that ripped things apart during 90s.

#Indian Army, #Burhan Wani, #Kashmir Militancy
The views and opinions expressed in this article are those of the authors and do not necessarily reflect the official policy or position of DailyO.in or the India Today Group. The writers are solely responsible for any claims arising out of the contents of this article.

The author is a journalist who lives in Srinagar.