Why KCR is gearing up for early Assembly polls in Telangana

The ruling Telangana Rashtra Samithi (TRS) is preparing for a massive show of strength on September 2 at the Pragathi Nivedana Sabha on a 1,600-acre site at Kongara Kalan in the eastern suburbs of Hyderabad. The TRS supremo and state chief minister K Chandrasekhar Rao directed party leaders to bring tens of thousands to the rally after announcing a slew of sops to woo voters and declaring the party is poised to win 100 of the 119 assembly seats.

KCR is to present a report card on the four years of TRS governance. The rally, he believes, will engender the feel-good factor the TRS has generated by a wide range of social and development initiatives in a please all strategy and ensure the TRS of a second term in office in a row. Having set constituency-wise targets to mobilise crowds the rally will enable the party to assess relative strengths of local leaders and help it pick candidates.

The TRS chief’s calculation in proposing an early election is the apprehension that a simultaneous poll to the Telangana legislative assembly along with that to the Lok Sabha may diffuse the focus on regional issues in the political narrative and electioneering may work to the detriment of the TRS. 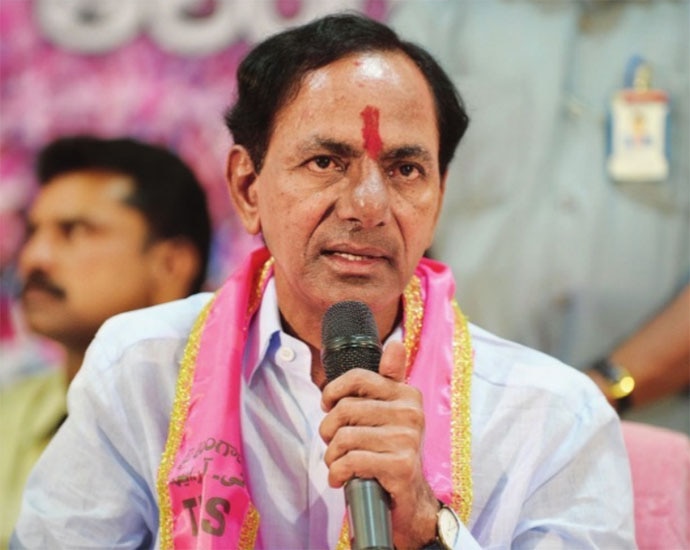 KCR is to soon present a report card on the four years of TRS governance. (Photo: PTI)

It assumes that if the assembly is dissolved, more than six months ahead of the due date in May 2019, the Election Commission will conduct the assembly polls along with that to the Mizoram, Rajasthan, Madhya Pradesh and Chhattisgarh legislatures due around the yearend and the TRS triumph.

In June 2014, in the first election to the assembly of the fledgling Telangana state, the TRS bagged 63 of the 119 seats. With ambitious legislators from other parties, including the Congress and the TDP crossing over, the TRS strength rose to 90. KCR is now expecting his party to fare better on the strength of his ministry’s performance.

If the assembly polls were delinked from the Lok Sabha poll, optimists in the TRS feel, the party will be at a greater electoral advantage than in a simultaneous poll in which the blitzkrieg and electioneering of PM Modi and the BJP may grab greater mind space of the voters. KCR will be looking to take advantage of a divided opposition. (Photo: Mail Today)

There is plenty that the TRS can capitalise on including the Rythu Bandhu farm investment support grant and the game changer Mission Bhagiratha to provide piped water supply daily to all households from the Dasara festival season in October. The ruling party is not being smug and KCR is announcing more measures to string together a social coalition of caste and community cohorts to rally behind the TRS before taking the final call recommending the dissolution of the legislative assembly to the state governor ESL Narasimhan.

Some analysts claim that advancing the polls is an understanding — a quid pro quo of sorts — that KCR has arrived at with PM Narendra Modi. If the TRS manages to gain by advancing the assembly polls, it could possibly back the BJP after the Lok Sabha poll.

The Congress claims it is not caught in the defensive. “KCR is seeking early polls after making tall promises before the anti-incumbency against his government deepens further,” said Telangana Pradesh Congress Committee president N Uttam Kumar Reddy. “Congress is ready to face elections even if held tomorrow.” Evidently, the KCR gambit is to take advantage of a divided opposition and an underprepared Congress, though they were not caught off guard.

Also read: Rajiv Gandhi, 'the father of mob lynching': Is such a hoarding outside BJP headquarters right or wrong?