The mysterious case of murdered rationalists and their missing killers

Since 2013 and 2015, the murders of the rationalist Narendra Dabholkar and Leftist activist Govind Pansare in Maharashtra have left both people and the police shocked.

On August 30, 2015, Kannada scholar and writer MM Kalburgi was shot outside his home in North Karnataka. He was allegedly killed for a remark he made in June 2014, where he, it was claimed, quoted Jnanpith awardee UR Ananthamurthy, and also apparently said that urinating on idols would not attract divine retribution.

Incidentally, all three were killed by 7.65mm country-made pistols.

According to sources, Ganesh Miskin (27), one of two suspects arrested by the Karnataka Police CID for Kalburgi’s murder, said that the 77-year-old scholar’s statement, made during a discussion on an Anti-Superstition Bill, was perceived as “anti-Hindu,” and triggered the attack on him.

Miskin and Amit Baddi (28), both linked to a radical Hindu outfit, were arrested by the CID on September 15, after a Special Investigation Team (SIT) of the Karnataka Police probing the September 5, 2017 murder of journalist Gauri Lankesh (55 years) indicated their possible involvement in the Kalburgi case. 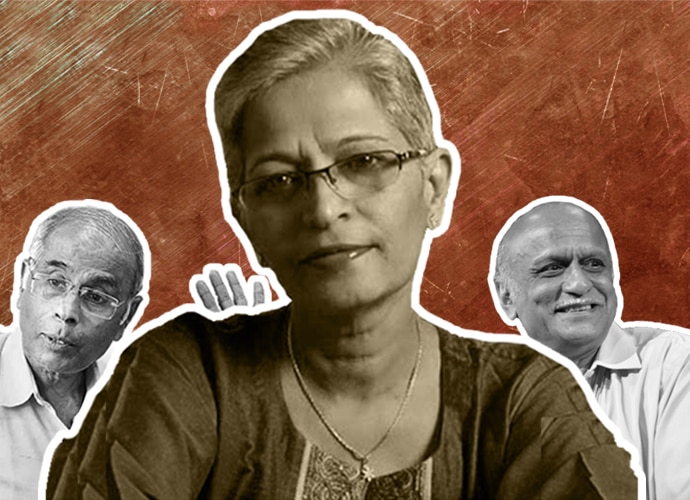 Pansare. Dabholkar. And Gauri Lankesh. The deaths are deeply troubling. But the police inaction more so. (Photo: DailyO)

Both youths are from the Hubli-Dharwad twin city region in North Karnataka. They were earlier named among 16 people linked to radical Hindutva outfits from Goa, Maharashtra and Karnataka, who were arrested by the SIT in the Gauri Lankesh case. Both have a criminal record for involvement in communal violence in the Hubli area.

Earlier, it was also discovered that the Sanatan Sanstha and the Hindu Janajagruti Samiti (HJS) — both highly communal — allegedly planned and executed the murder of Gauri Lankesh reportedly in Bangalore. Following Gauri Lankesh’s murder last year, forensic analysis of the cartridges and bullets revealed that one 7.65 mm country-made pistol was used in both the Kalburgi and Gauri Lankesh murders.

In July this year, both Miskin and Baddi were arrested by the SIT probing the Gauri Lankesh case, after investigations revealed that they were reportedly part of a group of Hindu activists — many were linked to the Sanatan Sanstha and its affiliate, Hindu Janajagruti — who allegedly planned and executed the murder of the journalist in Bangalore.

Miskin, who worked in an incense manufacturing firm in Hubli, was accused of taking Gauri Lankesh’s shooter to her house on a motorcycle, while Baddi, who worked as a goldsmith, has been accused of facilitating the getaway after the murder.

In August 2018, the SIT, in a report to the CID, indicated the likely role of Baddi and Miskin in the Kalburgi case — including the possibility of one of them being the shooter. The SIT also indicated that a former HJS activist, Amol Kale (37), who allegedly recruited the two youths among several others and provided arms training, was also possibly involved in the murder.

Some of the suspects arrested in the Gauri Lankesh case had earlier indicated that the journalist was targeted for her alleged “anti-Hindu” statements — including a 2012 speech in Mangalore, which was re-circulated on social media, in which she said that Hinduism has no specific parentage and is merely an arrangement of social structure.

Following the 2012 speech, a resident of Mangalore had filed a case against Lankesh for hurting religious sentiments. According to sources, a video of her speech was found on a computer in the possession of a suspect, Sujeet Kumar (38), a former activist affiliated with the Hindu Janajagruti, who was also arrested for the journalist’s murder. The video was shown to youths allegedly recruited by the outfit to execute the murder.

But what is troubling is the lack of a sustained attempt by the Maharashtra police and government to find the killers of Narendra Dabholkar and Govind Pansare.

There are Hindutva groups in Maharashtra similar to the HJS and Sanatan Sanstha, which could have had a role in the rationalists’ killings.

The Maharashtra police SIT was granted custody of Amol Kale (37), Ganesh Miskin (27) and Amit Baddi (28) to investigate their alleged role in the shooting of Govind Pansare. The Maharashtra SIT concurred with the Karnataka SIT, that one of the two 7.65mm country-made pistols used to shoot the Pansares — Govind succumbed to the wounds, but his wife Uma survived — was supposedly used in the murders of Kalburgi and Lankesh.

This further exposes the widespread operations by Hindutva organisations to severely censure, if not kill, rationalists and secularists who have challenged saffron ideologies and movements which attack secularism and Constitutional rights.