Why Indians are obsessed with Kim Jong-un

Kim Jong-un, North Korea’s young dictator, has caught the imagination of the world, for the wrong reasons of course. Yet, he continues to fascinate. Whether he is threatning the US, launching ballistic missiles or conducting nuclear tests, he is always in the news. Whether he is spewing anger against the US or making peace overtures, this young man with a cherubic face remains in the limelight.

Ever since he succeeded his father in 2011, Kim - then in his late 20s (no one is certain about his exact date of birth) - has kept the world in tenter-hooks, no one sure what the young man would do next.

Initially, there was skepticism about his ability to take over the reins of power. But Kim has shown he may be eccentric but an astute and decisive leader, taking on none other than US President Donald Trump and cleverly manipulating a meeting later this year.

Kim Jong-un’s latest move - travelling to China and meeting President Xi Jinping in Beijing - has again caught the world by surprise as did his earlier decision to break the ice and send a team for the Winter Olympics in South Korea. Reams have been written about the armoured train which took the reclusive leader to Beijing. Stories of the lavish meals and expensive wines stocked on the train are being written and repeated across the world. How much of the stories are factual is impossible to guess, but the tabloid press of the UK is giving British readers lucid descriptions to hook them on to the colour story.

India is also giving much play to Kim Jong-un: his visit to China is being splashed across television channels, including the Hindi network. This is a surprise, considering that Indians are a self-absorbed people. They love to contemplate their navel, meaning the majority are not interested in what is happening in the world, except when it affects India.

Yet, Kim Jong-un's coverage of his recent visit to China has been exhaustive. Hindi television channels are reporting every bit of news about the North Korean leader’s visit. Why is he in focus? Is it because a young leader of an isolated nation seems to have outwitted the world’s most powerful nation? 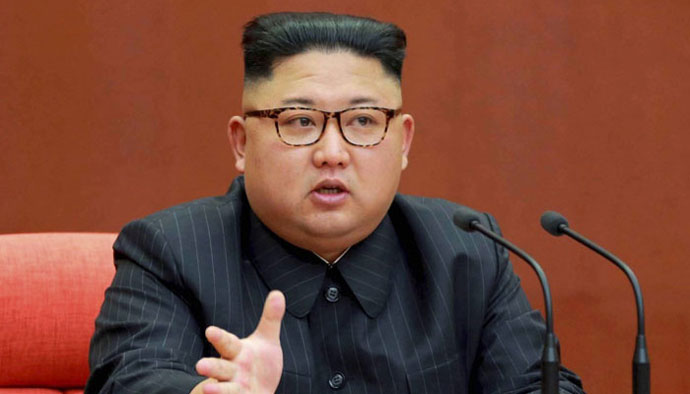 Yet, Kim Jong-un's coverage of his recent visit to China has been exhaustive. Photo: PTI

By not abandoning the nuclear option, unlike Iraq’s Saddam Hussain or Libya’s Muammar Gaddafi, Kim has been able to avoid their fate.

North Korea has been smart enough to conduct its diplomacy from a position of strength. Many ordinary Indians may not be familiar with the strategic dimension of North Korea’s nuclear policy. Yet, everyone is aware that this 30-something young man holds all the aces. The average Indian knows he is a strong leader and is fascinated by the stories that are woven around him.

As a nation, India loves strong leaders. Prime Minister Narendra Modi is admired across the country as he is seen as a tough politician who can take his opponents head on. He is the man with the 56-inch chest that the average Indian loves. That is not a random thought put out by the BJP, but a calculated move knowing Indians' admiration for a strong and decisive leader. This image has stuck with Modi and helped the BJP.

Indira Gandhi remains a popular figure to this day, though she was singlehandedly responsible for destroying institutions. Her tough stand during the Bangladesh war of liberation and her success in breaking up Pakistan’s eastern wing helped build her image as a decisive leader.

It was said that she was the only man in her Cabinet of pygmies! Her father Jawaharlal Nehru, a liberal leader who contributed much to nation building, is not admired by the average citizen. He is regarded as a man who could be taken for a ride by the Chinese.

The fact that an unprepared India was humiliated by the People's Liberation Army in the 1962 border skirmish has also helped to create the image of Nehru as a bleeding heart liberal, unable to take tough decisions. In a country where Chanakya’s work is much admired, getting the better of your opponents by fair or foul means doesn't shock anyone.

Vladimir Putin, another tough leader, however, does not elicit the same response. Perhaps the blood and gore, and the drama that is woven into the Kim Jong-un story, fascinates people.

Soon after taking over from his father, Kim purged both the party and the government of those he suspected would or could potentially oppose him.

Within a year of taking power, Kim Jong-un killed his uncle Jang Song-thaek as well as his aunt and several of his cousins. This was the uncle responsible for helping him to succeed his father.

Analysts initially predicted that Jang would be the power behind the throne, and guide the inexperienced young man to govern North Korea. Soon enough, Kim showed his true colours. He also got his elder brother murdered in Malaysia in February 2017.

He is almost a character from ancient Indian mythology.

#North Korea, #Kim Jong-un
The views and opinions expressed in this article are those of the authors and do not necessarily reflect the official policy or position of DailyO.in or the India Today Group. The writers are solely responsible for any claims arising out of the contents of this article.