It would be an extraordinary gesture and possibly a game changer for peace for two hostile neighbours.

In a fresh twist in the ongoing case of Kulbhushan Jadhav, who is currently lodged in a Pakistani jail facing execution over charges of espionage, the neighbouring country's army claimed on June 23 that Jadhav has filed a mercy petition seeking pardon on compassionate grounds.

The Pakistan army stated that Jadhav has supposedly confessed to his complicity in espionage and terrorist activities in the country and expressed regret and remorse for the loss of innocent lives and massive destruction of property.

His confessional video has been aired on TV networks, evidently on purpose to reinforce Pakistan's claims that Jadhav is indeed a spy. To buttress its baseless argument, Pakistan says the video has been released "so that the world should know what India has done and continues to do against Pakistan".

Jadhav, in the meantime, has exhausted an appeal to the Military Appellate Court. If his appeal to Pakistan Army chief General Qamar Bajwa does not work, he will have recourse to appeal to president Mammoon Hussain for reprieve.

The release of the second confessional video, seemingly recorded under duress, earned a response from none other than Bajwa himself. He said that such an arrest (Jadhav's) was a "big achievement". As if to convince the international community in general and Pakistan in particular, Bajwa claimed that Jadhav was assigned subversive tasks - including attacks on radar installations, targeting gas pipelines and other vital infrastructure. 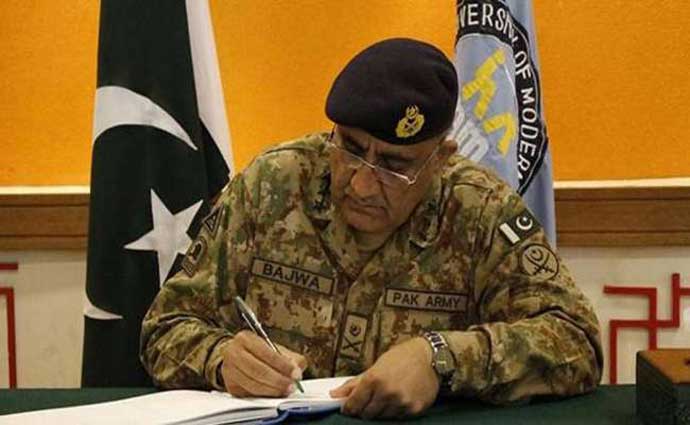 Pakistan Army chief General Qamar Bajwa has alleged that the RAW chief and even the NSA were directly overseeing the operations carried out by Kulbhushan Jadhav. Photo: PTI

Bajwa indicated the flow of funds for the destructive activities carried out through hawala as part of waging a war and destabilising Pakistan.

In order to give weightage to the allegations of spying, the Pakistani general charged that the RAW chief and even the NSA were directly overseeing the operations inside Pakistan. It's practically unthinkable that such high-profile key positions in the Indian external intelligence agency would ever handle such operations and that too as amateurishly, exercising no discretion.

As is common knowledge, Indian intelligence officials are thorough professionals and would never act like novices.Pakistan knows the fact well, but wants to drum up propaganda to rebuild a lost case.

Espionage and counter espionage are the oldest games known to this planet and civilisation - there have been innumerable such cases at regular intervals. Spies are caught, tried and convicted, and in many cases, they are acquitted and released.

However, death sentences are extraordinary and the verdict of International Court of Justice (ICJ) on May 18 indicting Pakistan may have provoked the top brass to be more reassuring to the public, prompting the double exercise of releasing the video and acrimonious statements by the army chief.

On the other hand, we need to gauge the timing of the fresh appeal for mercy. Being isolated, especially by the US which is trying to distance Pakistan as an "ally", better sense may have prevailed and led Pakistan to explore an honourable solution - to earn lost good will and an honourable exit from the Kulbhushan Jadhav fiasco.

Prime Minister Narendra Modi is on a visit to the US to participate in a crucial summit with US president Donald Trump. Pakistan must be wary; its ambassador in Washington DC had reportedly told his foreign ministry in Islamabad to be cautious as the Indian entourage might put across Jadhav's pardon case and his subsequent release.

This move is being closely watched.

Pakistan's statecraft has been left bereft and is disinclined to take few lessons in diplomacy as well as the live cases emanating from cross-country espionage.Nearly two years ago, a US spy net work was unearthed inside Germany. Both countries are the best of friends and exchange hard time intelligence.

Crucially, a 31-year-old German Intelligence officer belonging to the German intelligence BND was an "asset" to the CIA and the US was getting vital intelligence inputs from him. It was an absolute penetration into one of the most professional intelligence systems in the world so much so that even German Chancellor Angela Merkel's phone was aggressively monitored. When the racket was busted, Merkel was furious.

Germany decided to declare the CIA station chief in the country, Suddeutsche Zeitung persona non grata. US-German relations were strained and sank to an all-time low. At the time, Merkel remarked: "Viewed with good common sense, spying on friends and allies is a waste of energy. In the Cold War, it may have been the case that there were mutual mistrust. Today, we live in the 21 st century."

Such rhetoric continues to recur because as long as civilisations last, such games will be played. Today, US-German ties are normal as before and it's business as usual.

Against this scenario, Pakistan should show some maturity as a responsible state, regain international credibility by pardoning Jadhav and move on.

It doesn't warrant a death sentence. Pakistan's mindset is perhaps medieval, but it must adapt to the changing modes of diplomacy and modern geopolitical initiatives.

In 2004, the whole of India shook when it was discovered that senior RAW official Rabinder Singh was spying against his country's interests. He managed to flee the country with the help of his handlers. It is a closed chapter. India does not seem to be insistent on his repatriation, trial or subsequent prosecution. His acts against the nation cannot be condoned but we need to move on in a world with sweeping geopolitical developments.

Similarly, Kulbhushan Jadhav has been charged with conducting terrorist activities and aiding a special task to disrupt economic activities in Pakistan - specifically the China-Pakistan Economic Corridor (CPEC) - as well as fomenting socio-political disturbance and strife in Balochistan and Karachi.

Kulbhushan or no Kulbhushan, due to inherent internal strife and discontent, Pakistan has been on the tenterhooks with no let-up in civil strife, killings and sectarian violence.

On June 23, 13 people including seven cops were killed after a suicide bombing in Quetta. Kulbhushan has been languishing in jail for the last several months, but such subversive activities have recurred. Framed charges will not help.

Magnanimity is now a key word for peace. Releasing Jadhav would be an extraordinary gesture and who knows this move may be a game changer for peace for two hostile neighbours.

If Zulfiqar Ali Bhutto, despite his hatred for India, could pardon Sheikh Mujibur Rahman in early 1972 and pull him out of the gallows, any pardon to Jadhav will go a long way.

Also read: Truth behind Mukul Rohatgi stepping down as attorney general of India

#India-Pak, #Pakistan, #Kulbhushan Jadhav
The views and opinions expressed in this article are those of the authors and do not necessarily reflect the official policy or position of DailyO.in or the India Today Group. The writers are solely responsible for any claims arising out of the contents of this article.