The PLA acted in a pre-meditated fashion to move into eastern Ladakh, violating multiple boundary agreements. New Delhi has limited military options to end the stalemate.

A harshly-worded editorial last November holds clues to China’s unprecedented incursions along a 150-kilometre front in eastern Ladakh where the People's Liberation Army (PLA) has camped in three, possibly four, spots within the Line of Actual Control (LAC).

On November 3 last year, Global Times — an English language tabloid controlled by the ruling Communist Party of China warned ‘India’s border move will trigger new dispute’. The paper referred to a map of the Union Territories of Ladakh and Jammu and Kashmir published by India’s Home Ministry on November 2. “Not recognising the legitimacy of the ‘Union Territory of Ladakh’, China may reinforce its defence at borders with India, will firmly safeguard its sovereignty and territories and enhance communication with Pakistan and jointly oppose India’s move that breaks the status quo,” it said.

The bifurcation of the state, dilution of its special status and claims on Aksai Chin now appear to be one of the primary, if not the only provocation for the Ladakh incursions. Global Times editorials have since cautioned India against joining US-led anti-China groupings to rethinking any economic boycott of Chinese goods. Diplomatic and military efforts to diffuse the tensions between India and China are currently underway. (Photo: Reuters)

Indian military analysts now believe the incursions were planned at the ‘highest levels of the PLA’. China, unlike India, does not forward deploy its army along the 3,488 km Line of Actual Control (LAC). In recent years, it has been practising its ability to rapidly move them forward towards the border using the well-developed infrastructure on the Tibetan plateau. These exercises, scheduled for early January this year, formed the perfect smokescreen for the incursions.

An Indian Army military exercise planned for March this year was postponed after a Covid-19 scare following a soldier in the Leh-based 14 Corps testing positive. As the Army discovered to its dismay in early May, the PLA exercise rapidly turned into a multi-pronged thrust across the LAC in eastern Ladakh.

The Line of Control (LoC) is clearly demarcated and Pakistan’s attempt to alter it through intrusions in 1999 led to the Kargil War. The LAC with China, however, is not demarcated. Both sides have so far held 22 rounds of negotiations to decide the boundary question. No shots have been fired on the LAC in 45 years and over the years, Beijing has used multiple agreements to maintain peace and tranquillity on the border and its superior infrastructure to stealthily nibble away at territory. The latest intrusion, where thousands of PLA soldiers camping in tents in territory claimed by India along the LAC, is the most concerted attempt to alter the boundary to China’s advantage.

Diplomatic and military efforts to diffuse the tensions are currently underway, with the Indian Army insisting the PLA withdraw to their pre-May 5 positions.

China’s Foreign Ministry spokesperson Hua Chunying said on May 8 that the consensus in the talks was for “the two sides' need to implement the two leaders’ (Prime Minister Modi and President Xi Jinping) consensus and make sure the differences do not escalate into disputes.” 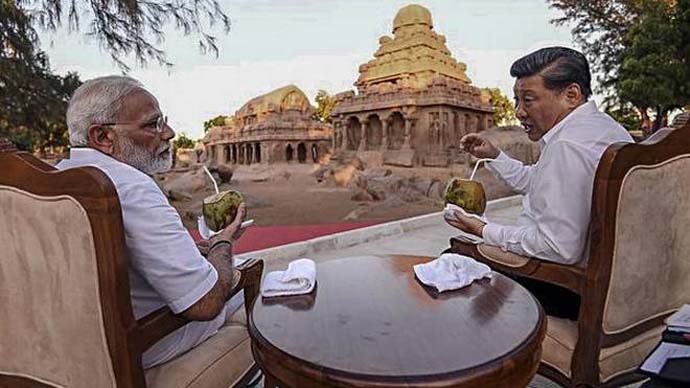 The issue of Article 370 seemed to be on the back burner when PM Modi and Chinese President Xi Jinping met in Mamallapuram in October last year. (Photo: ANI)

None of this mealy-mouthed diplomatese can conceal a few stark facts. The PLA acted in a pre-meditated fashion to move into eastern Ladakh. In doing so, they violated every border peace and tranquility agreement. Here, it is worthwhile to recall the events over the past year. On August 5 last year, the government of India abrogated the special status given to Jammu and Kashmir and bifurcated the state into two Union Territories administered from Delhi. Beijing objected to the move despite the visit by Foreign Minister S Jaishankar to Beijing on August 13 to allay China’s fears over the move.

The issue seemed to be on the back burner when Prime Minister Modi and Chinese President Xi Jinping met at the second informal summit in Mamallapuram on October 11 and 12. Sipping tender-coconut water and walking among the ‘rathas’ or stone chariots at the UNESCO World Heritage Site, the two leaders decided to celebrate 2020 — the 70th anniversary of the establishment of India-China relations — by deepening people-to-people and military contacts.

It perhaps reminded Beijing of how politically stable Indian governments have acted to halt its creeping acquisition of territory. In January 1972, Mrs Indira Gandhi, flush with a victory in the 1971 Bangladesh War and a friendship treaty with the Soviet Union, converted India’s North Eastern Frontier Agency (NEFA) into a Union Territory — Arunachal Pradesh. China had claimed large parts of the state as ‘Southern Tibet’. In 1987, Prime Minister Rajiv Gandhi — handed the biggest political mandate for an Indian PM — converted Arunachal Pradesh into a full-fledged state.

In 2019, Prime Minister Narendra Modi, the first PM since Mrs Gandhi to return to power with a majority, ensured Jammu and Kashmir was firmly part of the Indian Union by diluting Article 370. India has always claimed the state’s eastern-most fringe — Aksai Chin, a 37,000 square km area — occupied by China since the 1962 War. It did not do so as forcefully as it has in recent years when Home Minister Amit Shah claimed it as part of Indian territory on two occasions in Parliament — in August and November 2019. “Earlier, the claim on Aksai Chin was vague, but it has now become more concrete with a map and threatens China’s interests in both Gilgit-Baltistan and Aksai Chin,” says author and historian Claude Arpi. While the PLA’s moves were planned well before the Covid-19 pandemic, analysts believe the disease could dictate and indeed complicate India’s military response.

“Perhaps the PLA’s thinking is as follows: They are unaffected by Covid-19, India is expected to peak later. If we mobilise, it is possible the infection may spread in the Army. The PLA, dug in, will sit back and either achieve stalemate or wait for India to start a localised conflict,” says Brigadier Kuldip Singh (retired), former Principal Military Advisor in the National Security Council.

While a conflict seems unlikely, the present standoff looks like it will be a prolonged one. An Indian Army tit-for-tat action of intruding and grabbing Chinese territory is one option to negotiate a withdrawal.

Ashley Tellis of the Carnegie Endowment for International Peace suggests this action carries risks. In a paper on the border confrontation published on June 4, he mentions how “China could parry Indian actions using its significant reserves already deployed at key locations along the front, in which case the stage would be set for perhaps a wider confrontation.”

The options before New Delhi are limited. The Army seems to be currently following its playbook from the Sumdorong Chu incident of June 1986, where it halted the PLA’s onward creep into a river valley in western Arunachal Pradesh. The Indian Army airlifted thousands of troops in for a prolonged standoff even as New Delhi swiftly converted the UT into a state. “It was a clear signal to the Chinese that the state was ours,” says veteran diplomat G Parthasarathy, then spokesperson in the Prime Minister’s Office. Troops on both sides pulled back only after Rajiv Gandhi’s visit to Beijing in December 1988, the first by an Indian PM in 34 years. Prime Minister Modi is due to visit Beijing for the third informal summit with China’s President Xi Jinping. Could the Chinese be setting the stage for that meeting?

Also read: 2019: A turbulent and eventful year for Indo-China relations