Why there's a Netaji angle to Lal Bahadur Shastri's death

Former PM's family firmly believes that he was murdered.

Former Prime Minister Lal Bahadur Shastri's eldest surviving son Anil Shastri has stirred a hornet's nest by demanding an inquiry and declassification of records concerning the controversial death of his father 49 years ago. Shastri has gone public with his family's belief that his father did not die a natural death.

The demand, coming as it does just before Shastri's birth anniversary and disclosure of the West Bengal government dossier on Subhas Bose, is likely to die out unlike previous occasions.

Some Twitterati are coming down on Anil, a senior Congress party leader, asking why is he raising the matter at this moment.

The fact of the matter is that the Shastri family has always taken this line. From day one, from the time the former PM's mother saw her son's body, the family suspected poisoning. They demanded autopsy and an inquiry but it was of no avail. The Congress government simply brushed the matter under the carpet.

The issue was revived only in 2009 when this writer filed RTI requests with the prime minister's office (PMO) and the ministry of external affairs.

Believe it or not, the PMO informed me that it possessed one, just one, classified document relating to former prime minister's controversial death. The ministry of external affairs wanted me to believe that its "concerned division" had no information on the subject matter. I disbelieved it because the sudden death of the prime minister must have thrown the Indian embassy in Moscow in a tizzy. Our ambassador in Moscow, TN Kaul, must have scrambled to inform Delhi of the tragedy. A flurry of telephone calls and telegrams over the tragic development would have ensued for weeks. The ministry would have gone on an overdrive to find out the circumstances leading to the prime minister's death. The ambassador must have sent a blow-by-blow report, and he must have done that, after checking the facts with the Russian authorities.

The Soviets, on their part, must have supplied reams of information to remove the last vestige of doubts in India. And as the charges of foul play emerged, our government, especially the Intelligence Bureau (there was no RAW in those days) must have scraped the bottom of the barrel in search for the truth.

So I flatly rejected the line MEA had given me. I was uneasy with their statement that the only main record available with the Indian embassy in Moscow was the report of the joint medical investigation conducted by Shastri's doctor RN Chugh and the Soviet doctors. The ministry confirmed that no post mortem was carried out in Moscow. I also got to know from the Delhi Police through another RTI reply that no post mortem was conducted in India either. Only an autopsy could have completely ruled out the poisoning charges.

In view of my doubts, on July 21, 2009 I filed another application seeking copies of the entire correspondence between the MEA and the embassy, and between the embassy and the Soviet foreign ministry over the issue. And this time, the ministry told me I could not be supplied the information under Clause 8(1)(a) of the RTI Act, dealing with "information, disclosure of which would prejudicially affect the sovereignty and integrity of India, the security, strategic, scientific or economic interests of the State, relation with foreign State or lead to incitement of an offence". 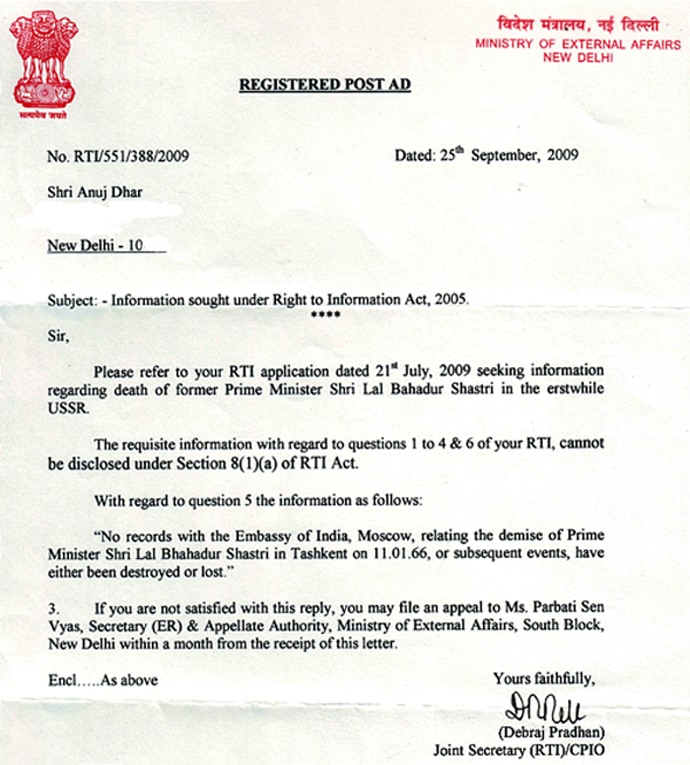 It was only after the intervention of chief information commissioner Sadananad Mishra that the MEA in August 2011 supplied me copies of Dr Chugh's medical report and a copy of the statement made by the external affairs minister in the Rajya Sabha. The medical report attributed the cause of death to "an acute attack of infarct miocarda (myocardial infarction)".

Now, there are several circumstances on record going against it the official line.

For a start, the Russian butler serving Shastri had been arrested - this fact came to light only decades later. Ahmed Sattarov, the butler, himself told British and later Russia media that a few hours after Shastri died he was woken up by an officer of the Ninth Directorate of the KGB. Suspecting that the Indian PM had been poisoned, the KGB men took Sattarov and others to a dungeon and subject them to a thorough interrogation.

It is not known that whether TN Kaul personal cook placed in the service of the prime minister was also interrogated. It seems from extant records that this cook, Jan Mohammed, was posted in the Rashtrapati Bhavan after he was moved from Moscow. Kaul became India's foreign secretary.

In the last few years I have had occasions to personally discuss the matter with Shastriji's youngest surviving son Sunil and Shastriji's two grandsons, Sanjay Nath Singh and Siddharth Nath Singh. The family firmly believes that PM Shastri was murdered. They also raise suspicions about the fate that befell Dr Chug and other members of Shastri's personal staff.

Then, there is a Netaji angle to the Shastri mystery. There is evidence suggesting that Shastri was not on the same page as Jawaharlal Nehru with regard to the possibility of Subhas Bose remaining alive after his reported death in 1945. It was been claimed that Shastri wanted to settle the Bose case. His family members think that Lal Bahadur Shastri in his last call home from Tashkent had stated about "some good news" he was bringing home.

The Shastri family thinks he was alluding to Subhas Chandra Bose.

(The writer's upcoming book What happened to Netaji? would be released in October.)

Post your comment
#Netaji, #Lal Bahadur Shastri
The views and opinions expressed in this article are those of the authors and do not necessarily reflect the official policy or position of DailyO.in or the India Today Group. The writers are solely responsible for any claims arising out of the contents of this article.