Forget Jungle Raj, crime is actually down in Nitish-Lalu's Bihar

Crime is right now at the centre of attention of the media, especially Hindi news channels.

We have been hearing and reading almost on a daily basis about the deteriorating law and order situation in Bihar since Assembly results were declared in November 2015. The opposition BJP had run its election campaign based on "return of jungle raj" if Lalu Prasad came back to power.

In spite of this campaign, people of Bihar chose Nitish Kumar-Lalu Prasad over the Narendra Modi-Amit Shah jodi. It wasn't only the BJP which was running this campaign, a section of voters did fear that law and order would deteriorate if the mahagathbandhan won - a reminiscent of the 1990s.

Social media is abuzz with tweets/posts indicating recent instances of murder, kidnapping, rapes and so on in Bihar, concluding that crime in Bihar has increased under Nitish-Lalu. Bihar Police has recently released the crime statistics for 2015 and these reveal some startling facts:

1. Crime under Nitish has declined across most categories in 2015 as against 2014

b. Crime has increased for only two categories - robbery (up two per cent) and kidnapping (up eight per cent) in 2015.

c. For all other eleven categories for which data is reported, crime has reduced in 2015 as against 2014, including serious offences like murder and rape. 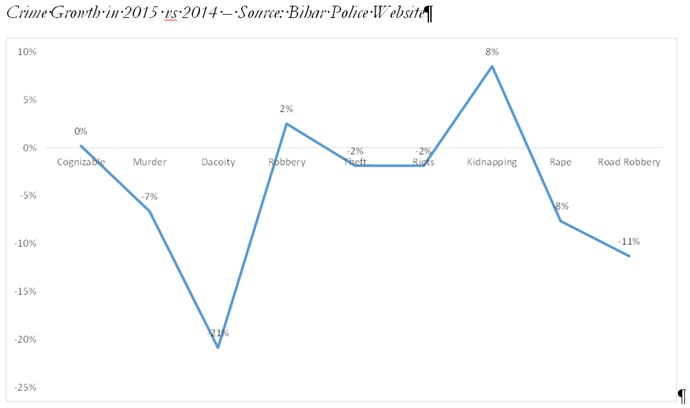 2. After Lalu joined the Nitish ministry in November 2015, cognisable crimes have reduced

Nitish took oath on November 20, 2015 with Lalu's sons, among others, as ministers. Election results were declared on November 8, 2015. So effectively Nitish and Lalu have been running the government jointly since November 2015 for approximately two months. To make a comparison I divide year 2015 into two time-buckets: January-October (Nitish alone) and November-December (Nitish and Lalu) and compare the average crime rate per month under various categories during these time-buckets.

b. Serious offences have reduced during the friends-turned-foe-turned-friends-again joint regime; murders (reduced by 19 per cent), kidnapping (reduced by five per cent), rape (reduced by 27 per cent) and riots ( reduced by 12 per cent). This is contrary to what some media outlets have reported.

c. The disturbing trend is that theft (up 16 per cent), robbery (up 19 per cent), burglary and road robbery (up 28 per cent each) have increased during the period. 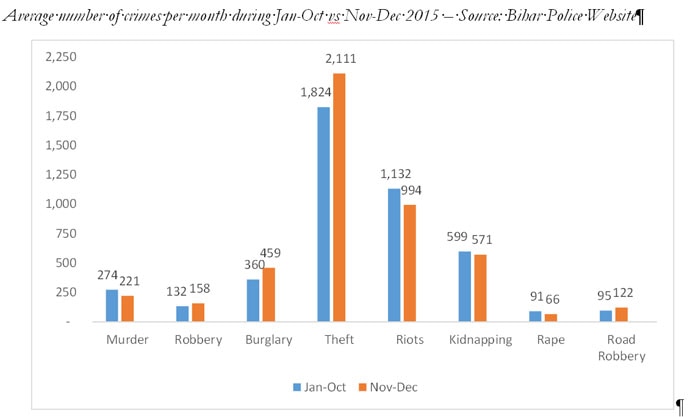 Sceptics could argue that in Bihar, police track record in diligently filing FIRs is poor compared to other states, hence the stats do not present a true picture. However, there is no data to prove this.

One of the key reasons for the Mahagathbandhan's win was that woman vote bank of Nitish remained loyal despite Lalu joining the alliance. Better law and order during Nitish's rule, more power to women in panchayats and steps for girl child education drew woman voters towards "Sushashan Babu" Nitish. Therefore, it is imperative for Nitish to maintain a good law and order situation in the state. Any deterioration would have tarnished his image.

The BJP has lost a prestigious election and its top leaders bear a grudge against Nitish big time, but it will be better if they focus their energies on reducing crime rates in states where they are in power, instead of tweeting about every incidence of crime in Bihar.

Law and order in Bihar gets unnecessary media attention

Crime in Bihar, one of the Hindi-speaking states, is at the centre of attention of the media, especially Hindi news channels. Each and every incidence is reported with a bit of "mirch-masala" without considering the fact that Bihar is not amongst the top states in terms of crime statistics. Do other states where the crime rate is high get the same media attention on national television? A clear bias here.

A CNN-IBN report in early part of January which other media circles picked up stated that 578 cases of murder were reported within two months of the assembly elections in Bihar. The actual number for November-December combined is 442, which is 24 per cent lower. Don't know what the basis of CNN-IBN report was! Responsible and not sensational reporting is the need of the hour.

Why Nitish needs to be careful

Around 60 per cent of the total strength of the Bihar Assembly consists of MLAs facing criminal charges, 49/80 from Lalu's party RJD and 37/71 from Nitish's party JD(U). He needs to rein in these elements. Otherwise a situation like Uttar Pradesh could emerge.

Relatives/supporters of these MLAs could try to take advantage of their near and dear ones in positions of power. A deteriorating law and order situation has the potential to scare away his woman vote bank and ruin his chances in the state in 2020 and even his prime ministerial ambitions (if he has any) in 2019.

Even Lalu won't allow the state to get into an anarchy-like situation for his own interests and those of his sons, as I mentioned in a previous article. "Why Lalu will not make Nitish the biggest loser of Bihar elections?". The government needs to work though on the conviction rate which is amongst the lowest in the country at ten per cent.

To sum up, crime under Nitish has been under control in 2015. Even during the last two months with Lalu as an equal partner in the government, contrary to the general perception, the total number of cognisable offences and serious offences have registered a decline. Theft/robbery-related crime is up, which needs to be controlled.

Numbers don't suggest any collapse of law and order as of now. The BJP of course is in a hurry to declare the return of Jungle Raj in Bihar to show the people of Bihar they made a wrong choice, but this is not backed by any data. Whether Nitish manages to sustain his law and order track record and curb the recent spike in some categories (as well as reported incidents in January 2016) needs to be keenly watched...

Post your comment
#Nitish Kumar, #Lalu Prasad, #Bihar
The views and opinions expressed in this article are those of the authors and do not necessarily reflect the official policy or position of DailyO.in or the India Today Group. The writers are solely responsible for any claims arising out of the contents of this article.