From Mamata to the Gandhis, many of Lalu’s avowed friends could not make it.

Tej Pratap Yadav often describes himself as a unique politician with both his parents, father Lalu Prasad and mother Rabri Devi, having served as chief ministers of Bihar. On Saturday, when he tied the nuptial knot with Aishwarya Rai, it added one more former chief minister to his extended family tree.

Daughter of RJD legislator Chandrika Rai, Aishwarya is also the granddaughter of a former chief minister, Daroga Prasad Rai, who ruled Bihar for 310 days in 1970. However, in the marriage function involving two families with three former chief ministers in their family tree, Nitish Kumar, a political rival of the RJD family, was the only serving chief minister who was in attendance to witness the couple. Though many of Lalu’s avowed friends — from Mamata Banerjee to the Gandhis — could not make it, but Nitish, a political rival, turned up with flowers in hand. 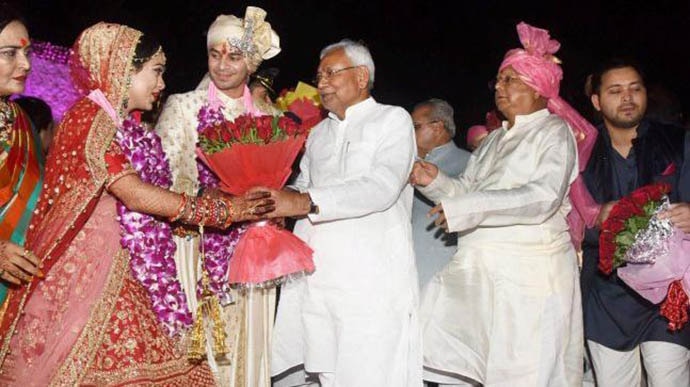 Nitish, a political rival, turned up with flowers in hand

Beyond the marriage, what caught everyone’s attention was the fact that the occasion saw Bihar chief minister Nitish Kumar meeting “bada bhai” Lalu Prasad after a gap of 10 months. Since July 26, when Nitish broke away from the Grand Alliance to rejoin hands with the BJP, he has been at the receiving end of unmitigated bitter criticism on a daily basis from his former alliance partners.

In addition to RJD spokesmen, Lalu’s sons, Tej Pratap and Tejashwi Yadav, who ironically calls him Nitish chacha, have been attacking the chief minister regularly, a tirade seen both aggressive and intimidating in equal ounces. All this, however, did not stop Nitish from visiting Lalu’s family. Tej Pratap and Tejashwi Yadav have been attacking the chief minister regularly.

Attending a marriage in the family of a political rival was a warm gesture from Nitish. As he reached the marriage stage at Patna’s Veterinary Ground to offer his blessings, he walked straight to Lalu Prasad and held his hands. The RJD boss, who was out on parole from judicial custody in Jharkhand and is not keeping well, too got up and shook hands. As Nitish flashed a warm smile, Lalu for some moments looked a bit inscrutable but soon the chief minister’s warmth caught him up and the RJD chief too smiled back.

Nitish occupied a sofa along with Rabri Devi and spoke to her for some time. Nitish then spoke to Lalu’s eldest daughter Misa Bharti, a Rajya Sabha MP. One by one, all seven daughters of Lalu’s came forward to speak a few words with the Bihar chief minister.

Nitish recalled regularly seeing Lalu’s daughters when they were children and said it was after a long time that he was meeting all of them. All in all, he seemed warm and perfectly at peace with himself. Soon after, when Tej Pratap and Aishwarya walked on to the stage, Nitish blessed them, handing over a bouquet of red roses to them.

The Bihar chief minister has set high standards for him

Those who were present later described Nitish as a perfect politician with an infectious charm. Not only governance, the credit for his long innings also goes to the new caste-neutral social base that he methodically created, going beyond the traditional hegemonic groups like Brahmins and Bhumihars, and more recently, Yadavs and Paswans.

During an exclusive conversation with the Bihar chief minister earlier, I noticed Nitish carefully scooping out a measured, quarter spoon sugar to add to his steaming cup of tea. “Tea has a special taste. Any more sugar will spoil it,” he said matter of factly. Whether it’s tea, governance or being a gentleman politician, the Bihar chief minister has set high standards for him.

Also read: Why Muslims fast on Ramzan (and how it should be done)