Lalu Yadav's thoughts from 'Gopalganj to Raisina': What Lalu Yadav’s memoir reveals about his life and politics

Lalu claims he's inspired by the greatest crusaders of time, including Mahatma Gandhi and Martin Luther King Jr. He also claims that despite RSS and Sangh Parivaar's oppression, his spirit remains fighting fit.

‘Author’ Lalu Prasad Yadav — currently languishing in the Birsa Munda Central Jail in Ranchi — considers himself in the league of Nelson Mandela, Martin Luther King Jr, Bhimrao Ramji Ambedkar and Mahatma Gandhi, claiming that had these world icons failed in their mission, history would have treated them as villains.

Gopalganj To Raisina: My Political Journey is a mesmerising account of a politician among politicians.

Lalu’s memoir in English has been co-authored by Nalin Verma, veteran journalist and a writer of repute. The book's narrative is fast and gripping and makes readers feel as if Lalu is speaking in his characteristic manner — its 229 pages are laced with quick wit and candid language. 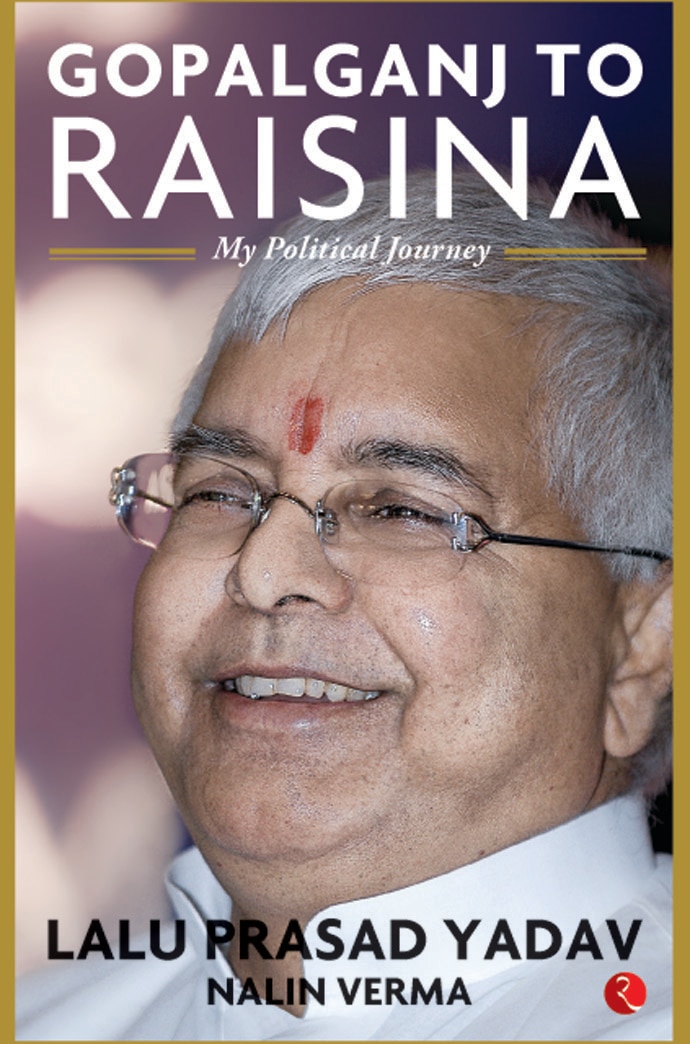 Sounding every bit provocative, Lalu argues that had Nelson Mandela, Martin Luther King Junior or Babasaheb Ambedkar failed in their efforts, history would have treated them as villains. “They still are villains for the biased, racist and casteist minds,” he writes. The former Bihar chief minister then goes on to add some ‘Laluisms’, “Powerful people and powerful classes always managed to divide society into ruling and the ruled classes. And whenever anyone from the lower hierarchy challenged this unjust order, they would be deliberately punished.”

Lalu admits this formulation may sound unusual to those who have nurtured a perception on the basis of ‘false propaganda’ spread about him, allegedly by his political detractors, through ‘condescending news channels’.

The Rashtriya Janata Dal (RJD) supremo is in jail over his alleged role in the embezzlement of government funds meant for cattle fodder in the 1990s when he was chief minister of undivided Bihar.

The author insists that Nelson Mandela, Martin Luther King Jr, Bhimrao Ramji Ambedkar and Mahatma Gandhi have lived in his thought process and actions ever since he entered student politics in the early 1970s. 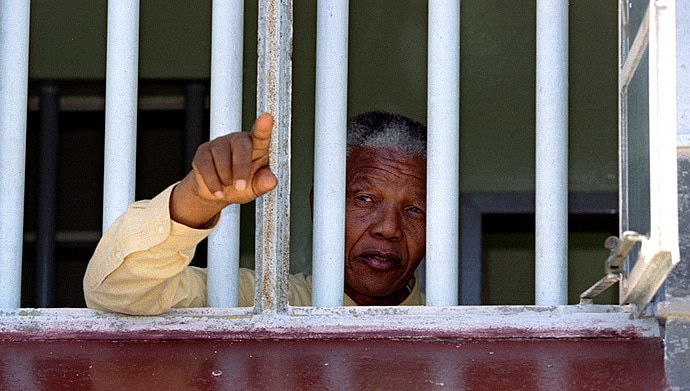 Lalu Yadav claims his life has been influenced by history's greatest personalities who fought bravely for the oppressed. (Source: Reuters/gandimuseum.org)

“They have been my role models and will remain so. The toiling masses and the persecuted minorities are aware of my rebellious and non-compromising streak. I have not used the names of great emancipators of mankind only to conduct some armchair academic exercises. I have acted upon and even tried to replicate what Mandela, Martin Luther King, Ambedkar and Gandhi did in their battle against discrimination and injustice in their various socio-political contexts,” claims Lalu in his book.

Arguing further, Lalu writes at length about Mandela’s offence, for which he was persecuted and kept in various South African jails for 27 long years. “He [Mandela] fought against apartheid — the policy of white dominance, discrimination and injustice. He questioned the racial segregation of blacks, and was charged with sedition. Mandela continued his battle, defying all odds, and eventually freed the blacks from the shackles of white dominance and racial discrimination in South Africa,” Lalu contends, in a valiant attempt to shower some glory upon himself for his work reportedly done for the empowerment of the backward classes in Bihar. Lalu then turns to Martin Luther King Jr’s life, giving details about how Rosa Parks was arrested in Montgomery, Alabama, after she refused to give up her seat on a city bus to a white male in 1955. “The incident moved King Jr, who organised a boycott of the Montgomery buses, which lasted for 385 days and culminated in a court in the United States ending racial segregation on all public buses. Racists bombed the rights activist’s house.”

Lalu says that though Martin Luther King Jr was assassinated way back in 1968, the unrelenting struggle for the right to equality and dignity for blacks in the US continued long after he was gone. “His struggle came to fruition in 2008, when the seemingly impossible happened — a black became the President of the United States of America, not just for one term but for two in succession.” Lalu subsequently talks about Babasaheb Ambedkar, born in the Mahar caste, and treated as an untouchable by ‘Brahminical’ and ‘Manuvadi’ forces. “He and other ‘untouchable’ students were segregated in school and were not allowed to mingle with students of other castes. When they needed water, someone from a higher caste would pour water into their cupped palms from a height, for the ‘untouchables’ were not allowed to even come in contact with the vessel.” Lalu says Ambedkar’s struggle, commitment to the oppressed and unmatchable genius resulted in the Indian National Congress (INC) asking him to become the chairman of the Drafting Committee of the Constitution of India.

“Even after more than 60 years of his death... even the Manuvadi forces, who subscribe to the caste hierarchy, today claim to be the champions of Babasaheb’s legacy. It would not be out of place to mention here a passage in one of the sacred texts that reflects the caste conundrum: Dhol, ganwar, shudra, pashu, nari, Sakal tadna ke adhikari. (The illiterate, the low-caste, the animal and the woman, They deserve to be beaten up to drive sense into them),” laments Lalu.

Lalu then describes Mahatma Gandhi as a one-man army fighting for communal harmony, amid terrible communal turmoil due to the Partition.

“He (Gandhi) had chosen to be at Noakhali in West Bengal, which was experiencing large-scale violence. He went on a fast-unto-death and broke the fast only after local leaders assured him of restoration of peace, and when amity began to return. Communal violence had broken out in many parts of India and the country had limited resources to meet the challenge. While the forces were deployed in the rest of the country, Gandhi held fort single-handedly and ensured a semblance of normalcy in eastern India. This messiah of both Hindus and Muslims was assassinated by a person who believed in communal hatred and Manuvadi thought,” Lalu pens in his raconteur's style.

He then adds, “The journey of my life has been similar to those of these great men, though I make no claim to be anywhere near their stature; it would be foolish of me to do so. Throughout my political life, I have relentlessly struggled and followed the path shown by these great leaders and unflinchingly fought against the oppression of Dalits and other backward classes, as well as for the rights of the minorities. I have adopted the call of non-violence given by Mahatma Gandhi to accomplish in Bihar what Mandela, King and Ambedkar did in their times. As expected, my path was strewn with thorns, and the journey has not been easy. But I have never flinched from walking down that road. I believe in the dictum: When the going gets tough, the tough get going,” Lalu writes. 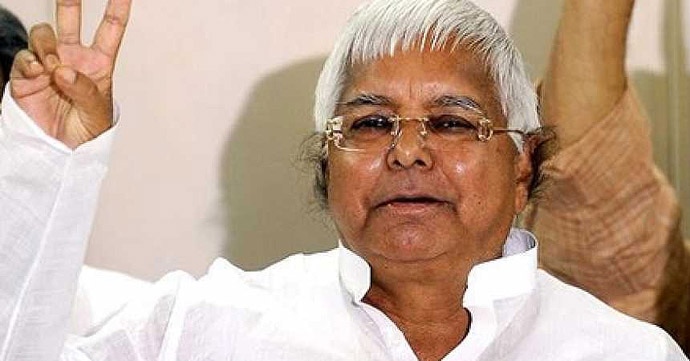 For Lalu, human society is divided into only two classes — the ruling and the ruled. The casteist, feudal and vested interests constitute the ruling class, while the multitudes battling for existence and identity are the ruled.

The ruling class has always manipulated law and jurisprudence to criminalise the subaltern people. The rulers had criminalised Mandela, Martin Luther King and Ambedkar to gag the voice of the oppressed and disallow them the right to live with dignity.

Talking about himself now, Lalu claims that the Rashtriya Swayamsevak Sangh (RSS) and Sangh Parivar have been rattled by his methods of communicating with people — and the people’s unadulterated love for him. “They have been against me because I gave a voice and dignity to the struggling masses, who lived in bondage. The Sangh Parivar minions intensified their campaign against me, particularly, after I halted Lal Krishna Advani in the tracks of his destructive Rath Yatra and arrested him in 1990 in Bihar. They have relentlessly spread false propaganda against me and have tried to create a negative perception about me through various instruments they control or have influence over,” Lalu concludes.

He then relies on the poetic flair of Faiz Ahmad Faiz to summarise his own spirit: