Stephen Paddock shot dead as many as 59 people.

Stephen Paddock, the alleged perpetrator of the deadliest shooting in US history used assault rifles to kill 59 persons and wound over 500 others.

Without the use of the military-grade weapons firing in automatic mode i.e. discharging several bullets in quick succession, it is unlikely he could have killed the number of people that he did.

But did he also use military style sniping tactics to maximise his death toll? 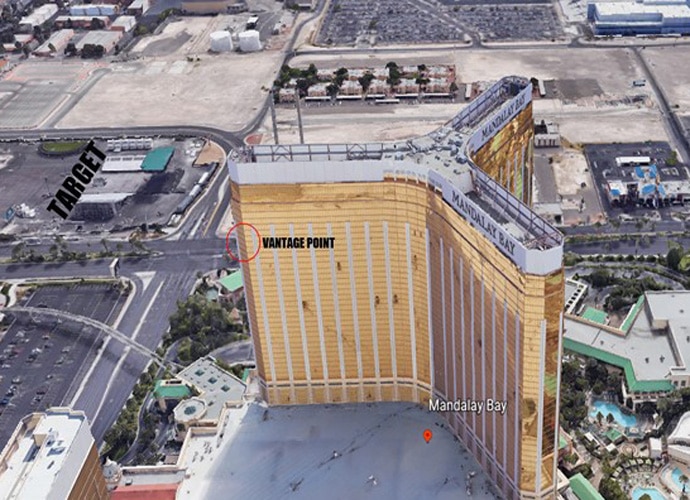 That would be possibly among the points of investigation among the other imponderables like how a 64-year-old accountant with no police history suddenly turn into a mass murderer. Or, how did he manage to stockpile 43 rifles, smuggling 23 of them with thousands of rounds, undetected into a hotel room?

The vantage point and the weapons Paddock chose now make it evident that the 'Las Vegas massacre' was not a spur of the moment action, but rather, a well planned carnage which must have taken weeks and months of planning.

Take the location of the room on the 32nd floor of the Mandalay Hotel. It is what the military calls the perfect 'sniper's perch' which the US army's field Manual 23-10 on Sniper Training outlines is "a steady, comfortable position with the best cover, concealment and visibility of the target area."

The open air venue where over 22,000 people gathered for a country music festival on October 2 was just 450 meters away from the hotel room, well within the lethal effective range of the 5.56 mm/.223 and 7.62 mm/.308 assault rifles Paddock used in the massacre.

See this animation for better understanding

Spraying bullets from this vantage point at such a huge gathering ensured he would extract a deadly toll especially because assault rifles can discharge all the 30 bullets in their clips in a few seconds.

The 'room hide position' for sniping in an urban environment as detailed in the sniper manual recommends the use of an existing room where the sniper fires through a window or loophole". Weapon support may be achieved through the use of existing furniture, desks and tables.

"Screens (common screening material) are important since they allow the sniper teams maximum observation and deny observation by the enemy. They must not remove curtains, however they can open windows or remove panes of glass." 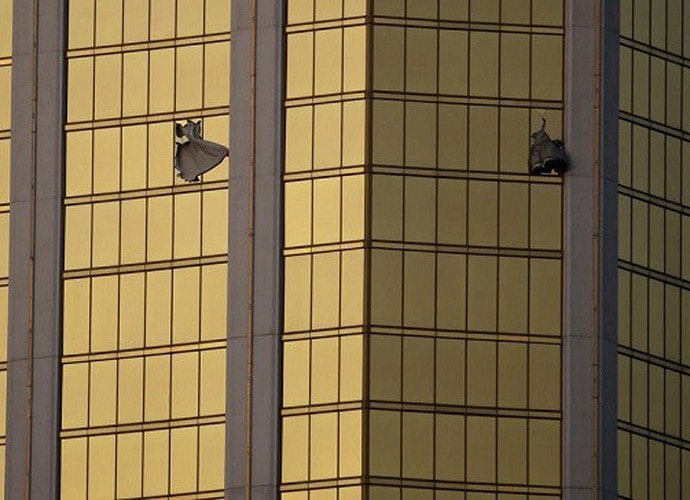 Drapes billow out of broken windows at the Mandalay Bay resort and casino Monday, October 2, 2017, on the Las Vegas Strip following a deadly shooting at a music festival in Las Vegas. Photo: AP

Paddock smashed two windows from his hotel suite. It is not known if he fired from both windows, several feet apart, but if he did, it would not be surprising. It is a military tactic called 'jockeying' where changing locations keeps the shooter's location uncertain and creates the impression of there being multiple assailants.

Police who stormed the room soon after Paddock had fatally shot himself found at least two automatic rifles mounted on tripods with scopes attached to them.

Only a handful of the multiple mass shootings in the US have been from standoff ranges where the victims never saw their assailants.

At least two recent ones were carried out by former military personnel proficient in the use of assault rifles. Micah Xavier Johnson who shot and killed five white police officers on July 16, 2016 was a US army reservist.

In a shooting spree lasting over nine months in 2002, John Allen Muhammad aka the 'Beltway Sniper' shot and killed 17 civilians in the Washington DC area. The former recipient of the US Army's Expert Rifleman's Badge converted the boot of his Chevrolet Caprice into a sniper hideaway where he lay prone and fired his XM-15 Bushmaster 5.56 mm sniper rifle at his unsuspecting targets.

Paddock had no link with the US military apart from a three-year stint with a US defence company in the early 1990s later taken over by Lockheed Martin.

A popular saying among the US army's sniper community goes 'sniping is 10 percent shooting and 90 per cent everything else'. The 'everything else' includes the choice of the weapon, choose the ones which will best suit the scenario, zero, clean and maintain them. A shooter has to know what the weapon would do under different scenarios, just as a hunter would.

These sniper lessons were used by Paddock which caused devastating effects on October 1.

Also read: Las Vegas shooting: I was in Mandalay Bay last year, it could have been me