Signing LEMOA with US a bold step, but India must be cautious

The agreement will hit the independence of New Delhi's foreign policy.

India and the US has given a concrete shape to their newly evolved companionship by signing the Logistics Exchange Memorandum of Agreement (LEMOA) that will allow the two countries to provide logistics support to each other's fighter planes, warships and personnel. Indian defence minister Manohar Parrikar who is in the US has accomplished the task of signing the LEMOA as promised to the US defence secretary Ashton Carter during his visit to Delhi in April.

LEMOA is a tweaked version of the Logistics Support Agreement (LSA), which facilitates the provision of logistical support, supplies and services between the US military and the armed forces of partner countries on a reimbursable basis, and provides a framework that governs the exchange of logistics. The signing of the LEMOA was the top agenda of Parrikar in the US capital. While the US is keen to have the LEMOA signed, India is pushing for forward movement on high technology trade. But unfortunately, the US leadership has so far been non-committal about it. They do not intend to give India any positive assurance at this stage.

Also read: Ahead of Modi's visit, where India-US ties stand as of now

Significantly, with the induction into the Missile Technology Control Regime (MTCR) earlier this year, India is eligible for higher technology purchases. The LEMOA is the centrepiece of three foundational agreements that the US sees as the basis of long-term military cooperation - the expression "alliance" being anathema to India.

While India would be pushing for the drone, the US will push its case for the manufacture of American fighter jets planed in India under the Make in India initiative. Obviously the US is going to get far more than India will get.

It would not be an exaggeration to say that the US has been using the supply of drones as a mechanism of arm-twisting to get access to the manufacture of fighter jets. 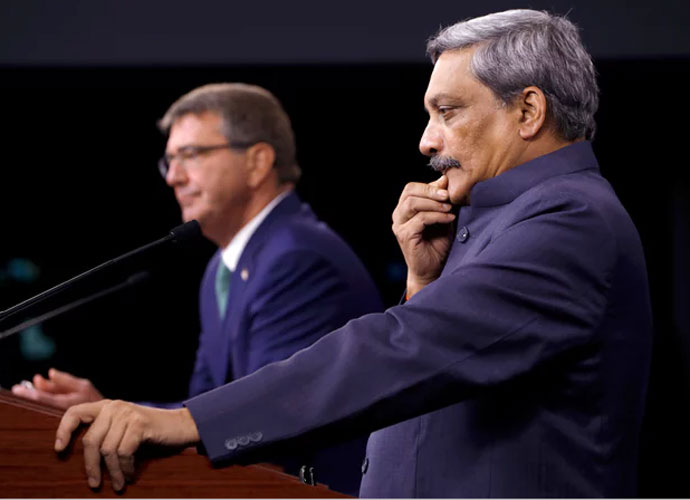 Only a couple of months back, Lockheed Martin, a premier defence technology company from the US, announced the start of manufacturing F-16 fighter jets in India, in support of the Make in India initiative. This would be one of the largest projects under the Make in India initiative. Surprisingly, manufacturing of F-16 aircraft in India will also be conditional to Indian government's contractual commitment to purchase the aircraft for its armed forces.

Also read: No fluff, want Modi to talk straight with Obama this US visit

Ironically, Parrikar had indicated that India was not looking for assembly at all, instead it was more interested for a company to join with an Indian partner and to start manufacturing here by Transfer of Technology (ToT) in most of the items. Many defence experts and air force personnel were surprised and disappointed at the move as it would be ensuring that the F-16 - a fourth generation fighter with a 40-year-old design - would remain in the Indian Air Force (IAF) for another 30-40 years.

The manner in which Parrikar has been single-minded in handling the defence deals makes it clear that he is determined to open up the Indian defence establishment before the US officials. The newfound friendship between Prime Minister Narendra Modi and US president Barack Obama will soon witness India formally joining the group of close friends and allies of the US. India under Modi has already distanced itself from the non-aligned movement (NAM). It has been shifting away from Russia towards the US in the defence sector.

The US, on its part, will offer India a gift for the 2019 Lok Sabha elections. During his visit to the Boeing facility in Philadelphia where the US aerospace giant manufactures its CH-47F Chinook heavy-lift helicopters, Parrikar would be offered the aircraft which will be inducted into the IAF in 2019.

The Chinooks will fill a crucial gap in the IAF's heavy-lift capabilities as it currently operates a solitary Soviet-origin Mi-26 chopper to deliver payloads to high altitudes. The chopper can be used for secondary missions such as aircraft recovery, disaster relief, medical evacuation and search and rescue. India is the 19th country to have selected the Chinook. The Chinook helicopters were introduced in 1962 and earlier variants were deployed in Vietnam.

US secretary of state John Kerry and commerce secretary Penny Pritzker are visiting New Delhi for the second Strategic and Commercial (S&C) dialogue. US defence secretary Carter will follow them. Senior officials from 12 different US agencies will be part of the S&C dialogue that will be co-chaired by the US secretaries and their Indian counterparts. The US officials and leaders are quite ebullient of their possible achievement. However, their only disappointment is their inability to end the Obama tenure without any progress on neither a Bilateral Investment Treaty and a common vision or approach to key issues at the World Trade Organisation (WTO).

Nevertheless one of the key takeaways from Parrikar's visit would be signing of the LEMOA. The move will allow the US to use India's bases as well as assets for replenishment of supplies and refuelling. This will be the sixth meeting between the two defence ministers. In the past, the US has shied away from offering its armed predator drones to India.

Prime Minister Modi is also expected to meet president Obama at the G20 summit in Hangzhou, China on September 4-5 for what will possibly be their last meeting as heads of government. All these exchanges will coincide with holding of the NAM summit in Venezuela on September 17-18. Unfortunately, Modi will not participate at the meet. Parrikar's visit to the US capital was advanced to conclude unfinished business before the makeover in Washington.

Modi and his colleagues are not sure of the attitude and approach of the next US president towards India which is why they are striving to ensure that crucial agreements must be signed while Obama is in office. The long-awaited bilateral military logistics cooperation is just one item that is expected to be ticked off in a US-India defence agenda. Undoubtedly, in the present situation, the US is now India's number one defence partner in terms of hardware supplies and operational exercises.

It is really intriguing how the government could go ahead with this agreement being aware of the fact that it is "disastrous" and will hit the independence of India's foreign policy. With this agreement, India will become a "full-fledged" military ally of Washington and would amount to "compromising" country's strategic autonomy. (IPA)

#Narendra Modi, #India-US Ties, #Lemoa
The views and opinions expressed in this article are those of the authors and do not necessarily reflect the official policy or position of DailyO.in or the India Today Group. The writers are solely responsible for any claims arising out of the contents of this article.

The author is a senior journalist.