Mishra's killing in 1975 led to the Congress' demise in Bihar. His assassins have finally received their sentence, but the the party still ceases to exist in the state.

Lalit Narayan Mishra alias Lalit Babu, the railway minister killed in the January 1975 bomb blast in Samastipur, could well have been Bihar’s chief minister had he survived the attack. He couldn’t but three months after his assassination, the then Prime Minister Indira Gandhi handed Bihar’s crown to the slain minister’s younger brother Jagannath Mishra, then just an MLA serving his first assembly term, making him replace Bihar chief minister Abdul Ghafoor.

Though Jagannath Mishra’s elevation was seen as a step to compensate and mollify the hurt family of the powerful slain minister as well as to consolidate Congress foothold in the Mithila region, it was clearly an indicator of Lalit Narayan Mishra’s towering stature in Bihar even after his death.

But Lalit Narayan Mishra’s own family - particularly his widow Kameshwari Devi – did not approve the conciliatory move. Congress had then governments both in Patna and New Delhi; and Kameshwari Devi only wanted the authorities to catch the conspirators and punish them. She subsequently also snapped her links with Indira Gandhi, who she considered a patron for her family during Lalit Narayan Mishra’s lifetime.

A Delhi court in its verdict delivered on December 8, nearly 40 years after the 1975 assassination, convicted four Ananda Margis - one of them an advocate - for the conspiracy and murder of Lalit Narayan Mishra. The verdict, however, has left his family members unsatisfied. Both Jagannath and slain leader’s son Vijay Mishra had deposed before the court in the past, claiming Lalit Babu’s had no animosity towards the Anand Margis who were marked as culprits in the CBI investigation.

A man of humble beginnings, gutsy pursuits and stratospheric achievements, Lalit Narayan Mishra was a towering political personality, whose political fortunes were in the ascendant when the cruel attack cut short his charmed journey. Mishra was elevated to Union Cabinet Minister’s position and given the prestigious Railway portfolio in February 1973, a year after he won the 1972 by-election held for Darbhanga Lok Sabha seat in Bihar.

The Congress had fielded him in the bypoll held after the death of Darbhanga MP Vinodanand Jha, a former Chief Minister. Mishra had trounced his opponent RS Yadav by over 91,000 votes in the bypoll. 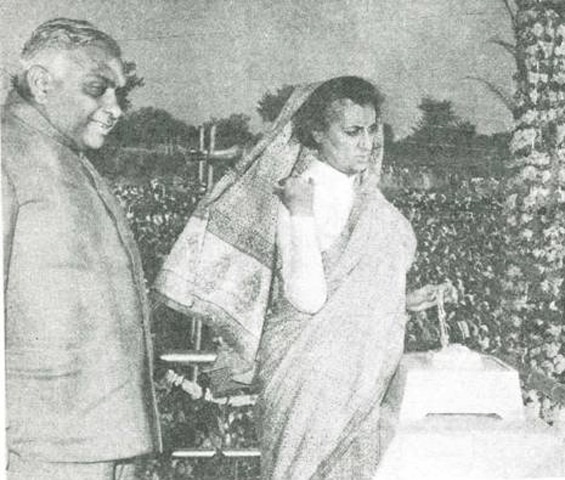 Lalit Narayan Mishra with Indira Gandhi at rally in Khekra in Meerut district in 1973.

A member of first and second Lok Sabha, Lalit Babu played an important role for Congress scheme of things in Bihar. The Congress had also given him successive terms in the Rajya Sabha after he lost the 1962 Lok Sabha election from Saharsa, his birth place, to the legendary backward leader Bhupendra Narayan Mandal by a slender margin of nearly sixteen thousand votes. He resigned from the Upper House only in February 1972 when he won the Darbhanga by-election, which ironically was his last election.

Though his legacy has helped his family prosper politically in Bihar since his assassination—Lalit Babu’s brother Jagannath Mishra thrice became Bihar Chief Minister, his son Vijay Mishra and grandson Rishi are both JD-U legislators whereas nephew Nitish Mishra is a cabinet minister in Bihar—his assassination effectively proved the beginning of the Congress's end in Bihar.

Jagannath Mishra, sharp as his brother but perhaps lacking his vision or the stature to lead — could not have a full five-year term in office even once, a feat many think his brother Lalit Narayan Mishra would have achieved. Jagannath Mishra, now 77 and away from electoral politics, is a member of Bihar’s ruling Janata Dal (United).

Lalit Babu was killed at a time when Bihar had already started swaying to the Total Revolution movement unleashed by Jayaprakash Narayan (JP). Indira Gandhi’s had pinned all her hopes on Lalit Babu to neutralise the agitation. But, it only gained momentum and gathered strength after Lalit Babu’s assassination, as Jagannath Mishra as Chief Minister of Bihar proved no match to JP’s leadership and charisma. The JP movement paved the way for the first non-Congress government at the Centre in 1977. The Janata Party also dethroned the Congress in Patna and Karpoori Thakur took over as Bihar chief minister after a brief spell of President’s Rule in Bihar.

Congress had a major setback in Bihar when Jagannath Mishra failed to lead his party to victory in the 1977 Assembly elections. Though Mishra won his seat in Jhanjharpur, his party Congress that contested 286 seats could win only 57. Its candidates forfeited their deposits in as many as 80 seats. On the other hand, the Janata Party had a clear majority with 214 MLAs in the 324 member assembly of then undivided Bihar.

Lalit Babu’s death also marked the emergence of powerful backward caste leaders in Bihar. Karpoori Thakur was the first in this league. Though Congress bounced back to power in Bihar in 1980, the party could gather very little traction on the ground and the socialist forces inimical to Congress gradually gained strength in Bihar. A year after VP Singh led Janata Dal replaced Congress in the Centre in 1989; Lalu Yadav also dethroned Congress in Patna and became Bihar’s Chief Minister in March 1990.

While Congress regained its hold in national politics in the subsequent years, it has remained at the margins in Bihar. Today, with just 4 MLAs in the 243-member Bihar assembly, the Congress is just a pale shadow of what it was in Bihar during Lalit Babu’s era.

Lalit Babu’s assassination case, one of the most long-drawn in India's legal history, meandered for close to 40 years and was heard by some 22 judges through the decades. The trial was transferred to Delhi by the Supreme Court in December 1979 after the attorney general alleged that Bihar government was interfering with the trial. Charges were framed against the accused in 1981.

The verdict may have bracketed the culprits, but the attack and the official response in the immediate aftermath raised questions, which are yet to be answered. The bomb blast had left as many as 25 people injured including Lalit Babu, his younger brother Jagannath Mishra and Darbhanga deputy inspector-general of police BN Mishra. The DIG survived, primarily because he was provided quick access to medical care, as police authorities moved him to the Darbhanga Medical College and Hospital - barely 30km from the explosion site – whereas the Railway official in a questionable move took the injured minister to Danapur Railway Hospital in Patna district, south of Ganga. It took Lalit Babu nearly eight hours to get admitted in Danapur railway hospital where he succumbed to the injuries the next day. This was the time when the Mahatma Gandhi Setu, the bridge that now connects north and south Bihar over Ganga, was not built.

Lalit Narayan Mishra was largely believed to have influential friends in then then powerful Soviet lobby. He was also known for his proximity to Sanjay Gandhi, Indira Gandhi’s younger son and a de facto power centre in New Delhi.  Within five months of Mishra’s killing Indira Gandhi declared the Emergency, which changed India’s politics forever.

#Bihar, #Lalit Narayan Mishra
The views and opinions expressed in this article are those of the authors and do not necessarily reflect the official policy or position of DailyO.in or the India Today Group. The writers are solely responsible for any claims arising out of the contents of this article.