Poll Police: 'Low rank cops are told to stand in the sun for hours. Our duty is such, we can't even take loo breaks'

These police officers have to stand for more than 18 hours on a poll day, till the EVMs reach the polling centre. Away from their homes for a month, they wish for fresh cooked food. And some shade.

They hardly ever get their due and are often painted as officers who work only after taking a bribe.

Yet, to ensure that elections take place peacefully, police officers from different parts of the state are camping out in hot, dry Noida. 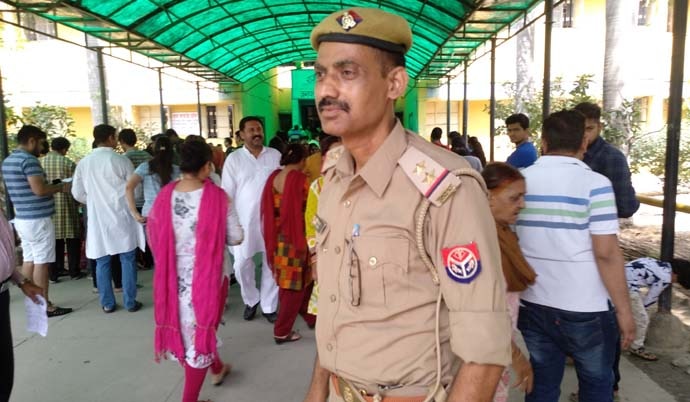 On duty throughout the day

“I left Gorakhpur on April 6 for the entire month — I, along with a few selected police officers, will travel from one district to the other. On a normal day, I would work for 9-10 hours — but now, I am on duty throughout the day,” said Ahmed. He came to the sector 12 school on Wednesday evening. “There are no CCTV cameras here, so I was not able to sleep. If even one of these EVM machines were stolen, I would have been suspended and an enquiry would have been imposed on me, so it’s not an easy task to do,” he said.

Mukund Lal, head constable standing at Sector 22 polling booth, says, “During poll days, the entire month passes and we don’t get to see our family.” 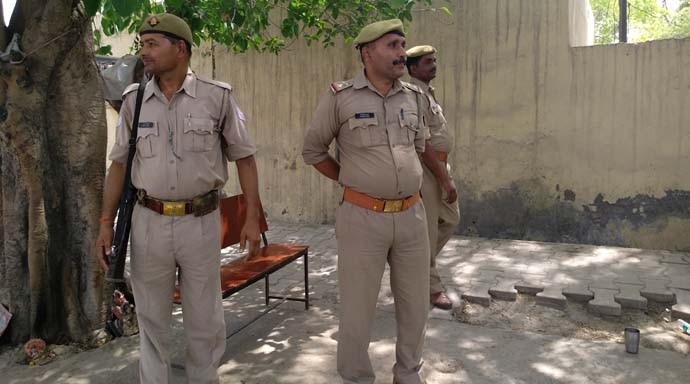 'We stand for hours, often in the sun. We don't even ask for look breaks'. (Photo: Author)

'Wish we could get fresh cooked food'

After standing in the heat for the whole day, police officers often don’t get what they want.

Ramchander Yadav, sub-inspector, says: “We get packaged food, which is often not that good. ‘Poori and sabzi’ is what the forces get on their platter. Ideally, if cooked food — which is given to paramilitary personnel standing on duty like CISF — can be given to us, then we won’t have any complaints.”

In fact, the cops were getting food in Noida in packets having ‘Namo’ imprinted on them. Away from home for many days, election duty cops wish for fresh cooked food. (Photo: Author)

Shiv Pujan Upadhyay, home guard, says: “Inspectors and sub-inspectors sit on a bench and relax, while they tell us to keep standing in the heat. We don’t even ask them for loo breaks. They put us at risk by making us stand in front of goons — while they only come after a wireless message goes to them.”