Meet Khush Nath, Voter of 90 Years: "I have voted in every poll since 1947. I prefer ballot paper to EVM. At least I knew who got my vote''

Khush Nath has never missed an opportunity to vote. After 1947, he started by voting for Jawaharlal Nehru 'and whoever would give my village a samosa'. Today, he's using EVM machines.

Meet Khush Nath (90) — who has been voting from Bisrakh, Greater Noida, ever since India gained independence.

He says nothing has changed over the years — politicians come and go, but the state of his village remains the same. A snake charmer by profession, Khush Nath says, “Poll day is nothing to celebrate for me. Not a single piece of development has taken place in this village. Politicians come during poll time and forget us completely afterwards.”

The village has a population of approximately 5,400 residents — most of them belong to the Scheduled Castes. The village has a police station, a government school (with no boundary wall) and roads which are full of crater-like potholes.

The old voter says that in his opinion, the ballot paper was much better than the present EVM machine. 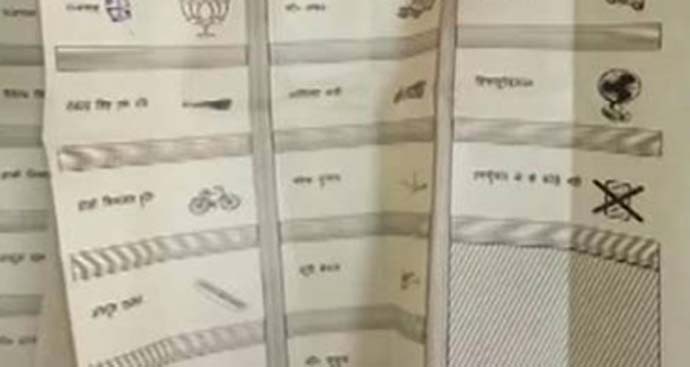 'Ballot papers were more reliable. At least I knew who I was voting for,' says veteran voter Khush Nath. (Source: Twitter)

“During the old days, I knew who I was voting for. Now, even after the button is pressed and beep sounds come, who knows to whom the vote will go? This time around, I had taken my son along with me into the booth as it’s hard for me to walk. So, he only took my hand and pressed a button. The worst part is, I don’t even know who is contesting — unlike previous years, politicians don’t come door-to-door.”

The 90-year-old went on to add that his village lies a bit far from Noida, so politicians also don’t want to come here.

Candidly, he said, everyone in this village wants Mayawati to win. “I want the government to change,” he remarked.

The first time he voted — 'for Nehru'

When the first elections took place in India, Khush Nath was 22 years old. “This is the same school where I had come to vote. Then, I had voted for Jawaharlal Nehru — I feel that he was one person who did some work for the country. There were less people, few aspirations and we got satisfied with what netas said. If a politician would come to our village and give us a samosa, we voted for him,” he recounted.

The Bisrakh resident says that one should always exercise their right to vote and that’s what he has been doing. “Over the last 90 years, I don’t have anything except the right to vote,” he added.

'Maneka Gandhi took away my livelihood'

Being a snake charmer, he once made Rs 200-300 a day. However, “After Maneka Gandhi came in, she passed a rule that snakes cannot be used by us to earn money. She took away my livelihood,” Khush Nath mentioned. Today, his sons make a living by playing in a local band.

#Snake charmer, #Mayawati, #Greater Noida, #Old voter
The views and opinions expressed in this article are those of the authors and do not necessarily reflect the official policy or position of DailyO.in or the India Today Group. The writers are solely responsible for any claims arising out of the contents of this article.