In the heat of electoral battle do not forget Sri Lanka. Terror must be tackled

With India in the frenzy of elections, the importance of using pre-emptive foreign policy initiatives to tackle the threat of international terror looms larger than ever in the wake of Sri Lankan terror attacks.

As PM Modi was in Varanasi to file his nominations, the General Elections of 2019 is approaching its midpoint.

Heated political campaigns form the order of the day as netas crisscross the length and breadth of the vast subcontinent. Fiery rhetoric against opposition parties and ideologies has become standard fare, even with PM Modi candidly saying in an interview with Akshay Kumar that he is in rather friendly terms with some opposition leaders and the fiery Didi of Bengal occasionally sends him sweets and kurtas. A day later, Didi put paid to all speculations of a 'fixing' by terming these gifts as 'courtesies' extended across the political spectrum. Prime Minister Narendra Modi waves to supporters as he campaigns for BJP in Varanasi. (Photo: PTI)

The results will be out on May 23, and whomsoever comes to power will need to maintain policy continuity in areas of statecraft.

Consistent policy decisions in some areas are crucial in the national interest. Amidst an election campaign — often dominated by a very muscular and masculine narrative over safeguarding national security from existential threats — parties must remember that the threat of terror looms as ominously as ever. It has assumed increasingly diabolic dimensions and transcends political or religious beliefs.

The implications of the terrible terror strike in Sri Lanka would not have been lost on any political party.

Nor would have been the importance of using pre-emptive foreign policy initiatives to tackle the threat of international terror — when terror has gone 'glocal', any slack anywhere down the chain of command will be suicidal to the security of the country and its people. Irrespective of its ideology, any political party which comes to power will have to live with the fact that every Indian initiative to counter terror will face continued opposition from Islamabad and Beijing. The spectre of terror returning to Sri Lanka just showed us how vulnerable the situation is, practically across the whole of South Asia — probably worldwide. 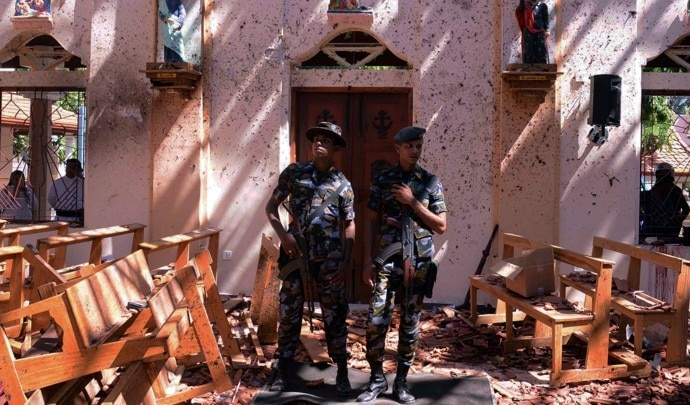 Sri Lankan soldiers stand guard inside a church after an explosion in Negombo on Easter. (Photo: Reuters)

As soon as the last stronghold of the Islamic State was run over by US-backed forces in Syria, about a month ago, the liberators realised a chilling fact — the thought-to-be-surviving leadership was largely unaccounted for. Bereft of a physical state, IS fanatics will be heading back home. They will bring along with them their ideology of hate and intolerance.

What's worse is that now recruitments and indoctrination take place online and any lone wolf attack is claimed by the caliphate, often leading credence to lunatics. Tracing a lone wolf is way harder than cracking a sleeper cell and that will remain the biggest worry of the authorities.

What further muddies the water is the consistent failure of the international community to effectively put a cap on terror networks operating from Pakistan.

India and four veto-wielding UN members have so far failed to put Masood Azhar on the proscribed list. China keeps postponing the issue, demonstrating in turn,  how little the international community can exactly do to control and tackle terror. In the near future, China will try to arm-twist India into participating in its Belt and Road Initiative (BRI) — in lieu of action against Masood. India participating in the BRI would be an official endorsement of the Kashmir problem as a tri-lateral problem.

Most recipients of 'cheap' Chinese loans are slowly realising the true implications.

Irrespective of its ideology now, the next government of India must make safeguarding the country from terror its prime priority. That can as well be its cornerstone of foreign policy. The way we tackle terror must change. Instead of responding, we must pre-empt, we cannot simply react.

India must act — and leave the reacting to 'others'.

Also read: Sri Lanka’s Islamist nightmare: Why the investigation is being closely watched by India and Maldives

#Narendra Modi, #ISIS, #Terrorism, #Sri lanka serial blasts
The views and opinions expressed in this article are those of the authors and do not necessarily reflect the official policy or position of DailyO.in or the India Today Group. The writers are solely responsible for any claims arising out of the contents of this article.