Stepping away from the hyperbole, the marketing and the media blitzkrieg, I went on a personal campaign trail through Uttar Pradesh. Here's what I found.

Despite being a techie, politics has always been an area of keen interest for me.

Hence, this election, I decided to take a break from work and travel to better understand our multi-layered democracy as well as the pulse of voters in the Hindi heartland. I spoke to reporters (who had covered over a hundred constituencies across states), met political activists from different parties, heard politically-aware and opinionated voters of all stripes, and most importantly, spoke to a cross-section of silent voters who will ultimately decide the fate of these elections.

Here is a synthesis of what I saw and heard on the ground:

Have the benefits of the numerous welfare schemes of the Modi government reached the ground?

Keeping aside the hyperbole and marketing, the macro answer is a definite yes — though with several caveats and nuances.

LPG connections under Ujjwala have been delivered, though a large number of beneficiary households continue to use the traditional wood-fired chuhla alongside the LPG-fueled stove. The exact mix depends on the affordability of the LPG cylinder refills by the household. The need to pay for refills upfront, with the subsidy coming in the bank account later, becomes a deterrent in some cases.

Household toilets have been constructed under Swachh Bharat Mission — however, there are instances where there is a difference between the numbers reported on file and what exists on the ground. The leakage is usually at the panchayat level, with the local administration either being complicit or turning a blind eye to the irregularity in order to meet targets. Getting there, slowly. The PM's welfare missions have generated some results but have some way to go. (Photo: PMAY)

Electricity connections under the Saubhagya scheme are reaching the households — but there are teething issues around bills that need to be resolved.

Under PM-KISAN, a large number of eligible farmers have received one or two instalments of Rs 2000. Fasal Bima Yojna elicits some unfavourable responses.

Ayushman Bharat is still early to create an impact or assess.

Benefits of Mudra and Skill India are not visible on the ground.

On balance, the schemes of the Modi government are reflected on the ground. However, given their ambition in terms of coverage as well as the complexities involved, there is a significant distance to travel. A couple of schemes need to go back to the drawing board as well.

There are three concurrent narratives with regard to Narendra Modi on the ground. In my travels: In conversation with media and the politically aware youth of Kanpur on the elections. (Photo: Gaurav Goel)

First is the narrative of Modi as a messiah of the poor.

People in the remotest part of the country (for example, a family staying in the middle of a small agricultural field on the outskirts of a remote village in the most backward Bundelkhand region of Uttar Pradesh) believe that Modi is doing his best for the poor. Never mind if some of the schemes have not reached them. Either they have seen others in their village/neighbourhood benefit from those schemes, and if that is also not the case, they believe that the poor at large in the country must be benefitting.

They blame the local administration or their village pradhan/sarpanch/ mukhiya for any shortcomings — and not Modi.

The image of being a single man who has committed his life to the nation, and someone who has seen poverty up and close, only adds to this narrative.

The second narrative is of Modi as a strong and decisive leader who can keep India secure, someone who has enhanced India’s stature in the world, and someone who can give a befitting response to Pakistan whenever required. The Balakot strikes have only added to this narrative.

The third narrative is of Modi as a Hindu mascot. This narrative is especially prevalent in pockets which have traditionally seen religious tensions, or real/perceived minority appeasement in the recent past. It sometimes gets mixed with the second narrative and Pakistan becomes synonymous with 'anti-Hindu'.

A combination of the three narratives is at play in varying proportions in different parts of the Hindi heartland.

The most revealing aspect is that the narrative has percolated to the remotest parts of the heartland and amongst the most marginalised sections. His message has reached remote corners too: Prime Minister Narendra Modi during his roadshow in Varanasi. (Photo: AP)

On the contrary though, the Congress’s narrative is nowhere to be seen — their talk about NYAY and having a different approach to progress that we see in the national media simply does not reflect on the ground.

When it comes to electoral alliances, it is often said that two plus two is not necessarily four.

The most critical and complex alliance of all in these elections is the gathbandhan of the SP and BSP in Uttar Pradesh. Having seen this alliance at play closely on the ground, I can say that two plus two is far from being four.

There are several challenges — long-standing rivalries at the local level between the core supporters of SP and BSP, a large number of disgruntled leaders who could not get tickets because of the division of seats (some have even moved to the Congress), the social dynamics between the Yadavs and Dalits, which is only getting more convoluted with the signaling from the top, etc. Further, the Congress is playing a spoiler for the gathbandhan wherever it has fielded strong candidates, directly benefitting the BJP.

Unlike Uttar Pradesh, the alliances are more natural in Bihar and Maharashtra.

The BJP is fighting this election with all its might — a blitzkrieg marketing campaign, Modi's interviews to print/electronic media, mega rallies by its leaders, formal and informal narratives through social media — and most importantly, booth management by formidable on-ground election machinery. 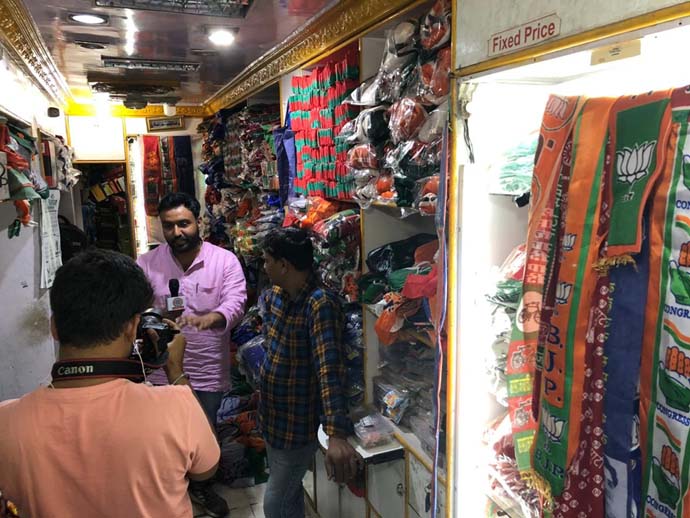 Colourful election merchandise on display at a shop in Kanpur. (Photo: Gaurav Goel)

The Congress, which needs to necessarily do well if it wishes to stop the BJP juggernaut, has almost receded on the ground.

Individual and seasoned Congressmen are putting up strong fights in their respective constituencies, but the party as a whole is far from being in a war zone when it comes to the ground. The non-Congress opposition is doing a far better job when it comes to fighting it out with the BJP.

Overall, one has to judge by putting all the factors — the welfare, the narrative, the alliances and the machinery —  together.

While I would want to resist the temptation of making a seat prediction, from what is visible on the ground, it seems to be a clear 'advantage Modi'.

#Jan Dhan Yojana, #Pmay, #Pradhan mantri fasal bima yojana, #Modi in Varanasi
The views and opinions expressed in this article are those of the authors and do not necessarily reflect the official policy or position of DailyO.in or the India Today Group. The writers are solely responsible for any claims arising out of the contents of this article.

The author is the Founder & CEO of ‘Samagra | Transforming Governance’, a governance consulting start-up based in Delhi.