Yes, the IAF is to be credited for the strike. But people believe it wouldn't have been possible without Narendra Modi.

The people of our country will soon exercise their voting rights to determine who should be the next prime minister. No matter how much we talk about powerful or credible election candidates, we cannot deny the fact that this electoral contest has essentially turned into a battle of personalities.

The cynosure of all eyes in the upcoming General Elections are three political personalities — Prime Minister Narendra Modi, Congress president Rahul Gandhi and the uncrowned leader of the Third Front, Mamata Banerjee.

The debates may rage about who is the most suitable to lead the nation — but among the three, Narendra Modi has an advantage that none of the other candidates has.

He has public approval of his unprecedented bold stand against Pakistan. 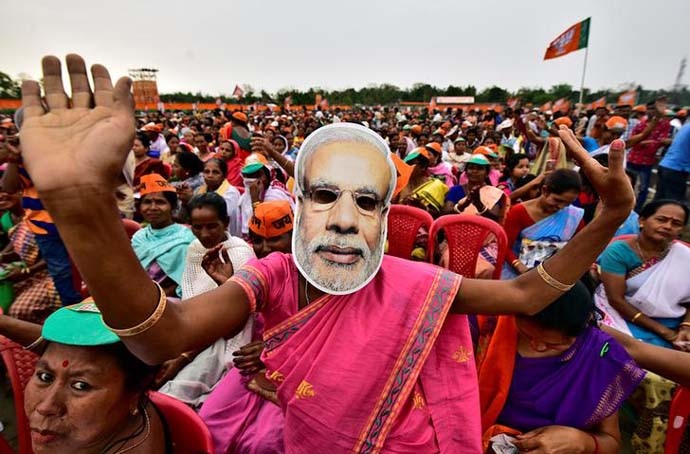 Yes, she approves: His rivals may like it or not but Narendra Modi has got public approval. (Photo: Reuters)

The decisive steps that Narendra Modi has taken against Pakistan have undoubtedly positioned him as a prime minister who is not afraid of taking bold strides when it comes to the security of the country. The strong response to the Pulwama attack has cemented Narendra Modi's position as someone who is ready to go to any length to protect his nation's sovereignty.

This particular perception of Narendra Modi is unique — and it has eluded all the other prime ministerial aspirants in this country.

In my opinion, this one factor will be the decisive force that will pave his return as India's Prime Minister in 2019.

Over the years, India was known to be a nation which always promoted friendly relations with its neighbouring countries and hardly let terrorism come in the way of dialogues or peace initiatives. History stands witness to the fact that India has always played the defensive game when it came to Pakistan-sponsored terrorists. The primary thrust of the policies of all other governments prior to 2014 was to never attack Pakistan for its terror policy. India complained at appropriate forums, opened dialogues at various diplomatic and military levels and defended itself against incursions whenever possible.

But never before has India gone on the front foot — and struck such terror into the hearts of the enemy nation. Beyond all debate: The headcount can be argued over — but the fact remains that India hit Pakistan hard with Balakot. (Photo: Reuters)

We may debate the kill count or the range of destruction — but we simply cannot dispute the fact that the government took an unprecedented step by allowing the air force to go deep into Pakistani territory as a response to the Pulwama terror attack. If we talk about the message and the optics, then the message to Pakistan is clear — if Pakistan boasts of being Naya Pakistan, then India too is a Naya India, which doesn't dither on taking an aggressive stance if you threaten our country's sovereignty and peace.

This new foreign policy has apparently never been practised before. Before Narendra Modi's government came to power, India never crossed the international borders in retaliation of a terror strike.

Narendra Modi, in his first speech at Rajasthan, after the Balakot airstrikes, made it amply clear that if voted back to power, he will follow an even aggressive stance towards Pakistan and repeatedly emphasised that India is in safe hands. A message that seemed to clearly resonate with the audience.

Here is a video of the speech from India Today.

The same message seems to have resonated with the country's voters as well.

No matter how much we question whether Wing Commander Abhinandan Varthaman was able to down a Pakistani F-16 or not, the fact remains that Narendra Modi's popularity has peaked after the Balakot airstrikes.

It is this edge that Modi clearly has over all the other opposition leaders who are dreaming of occupying the prime minister's chair.

There have been several quantitative and qualitative research studies that have emerged post-the Balakot airstrikes that clearly show Narendra Modi has overwhelmingly won the trust of the people when it comes to national security. I will quote a few of them of here. A survey conducted by India Today television clearly speaks about the fact that post-Balakot, the credibility of the Modi government has gone up in the eye of the voters. As per the survey, about 55% of Indians credited the BJP government for the bombing of the terror camps in Balakot — what is more interesting is that the poll showed an overwhelming majority of 77% crediting the Modi government for the safe release of Wing Commander Abhinandan Varthaman from Pakistani custody.

The survey thus concluded that the Modi government has got a huge thumbs up from the people of India post-the Balakot airstrikes.

Another survey found that every fourth respondent wanted to Modi to come back as prime minister — and concluded that the Balakot airstrikes have greatly boosted Modi's image as the "Chowkidaar of the nation", a term coined by the prime minister himself.

The surge in Modi's popularity hasn't escaped international publications either. Here's a scholarly article from The Diplomat which clearly lists out the Pakistan factor as one of the most important issues in the upcoming General Elections: "...Most of the issues on the agenda relate to domestic concerns since matters related to foreign policy have traditionally been relegated to the background during election campaigning in India. But there is one notable exception — the relationship with Pakistan." The same article notes this aspect as one of the most important features of the 2019 General Elections. Thus, the message is clear across the board — though it is the Indian armed forces which have successfully conducted the anti-terror operations and the surgical strikes, the people of India have understood that such daring operations aren't possible without a strong political will and leadership.

The people of India overwhelmingly perceive that Narendra Modi has been able to gather the guts to deal with the humongous pressure (both internal and external) that follows such daring operations against an enemy country — and has been pretty successful at that.

Imran Khan's 'Naya Pakistan' has never been so cornered before — with the Indian government stopping all kinds of dialogues at all levels and upping the ante against them at all international forums, it is now the Pakistani Prime Minister who is urging India again and again to come to the table for a dialogue, while the Indian government consistently refuses to budge.

The tables have suddenly turned for Pakistan and more so after the Balakot surgical air-strikes.

But for Prime Minister Narendra Modi, the bold Balakot airstrikes have boosted his image as one of the strongest political leaders India has ever seen.

Also Read: How long can we shut our eyes to the plight of Pakistani Hindus?