Lok Sabha 2019: Will 'Chowkidar chor hai' vs #MainBhiChowkidar battles decide who will win the war?

The BJP seems to be defensive about Rahul Gandhi's charges, and floundering at its social media management. The Congress is doing better online, but what about its grassroots presence?

In my previous column, I wrote about how Congress General Secretary Priyanka Gandhi set the narrative for the party’s campaign in the Lok Sabha elections at her maiden address as a politician in Gandhinagar.

In a conscience-raising speech, she tried to raise awareness among voters on the power of their vote. She said that only the voters should decide what the real poll issues are, and stay focused on them even when somebody tries to distract them. By cautioning people against possible distractions from the BJP's camp, she effectively diluted any potential narrative Narendra Modi is likely to float on the lines of Pakistan and terrorism — his favourite poll planks. Her speech was strategically followed by Congress President Rahul Gandhi’s speech, where he listed out the real poll issues the Congress would focus on — and terrorism was not one of them.

While he briefly challenged Modi’s image as a true ‘desh bhakt’, he wisely stayed away from Balakot and Pulwama — giving no opportunity to the BJP to allege that the Congress was politicising the attacks.

Once the strategic narrative was set, it would have been foolish of the BJP to still hold on to their stronghold regarding the issues people want to talk about.

According to a recent survey by Axis-My-India for India Today's Political Stock Exchange (PSE), unemployment is the top issue for Indian voters — and not terrorism. “Thirty-six per cent of the respondents regard joblessness as paramount followed by terrorism at 23 per cent and farm distress at 22 per cent…Twelve per cent rated corruption and 7 per cent price rise as the key issues,” showed the survey. The message hit home and the BJP has been forced to shift the narrative.

Prime Minister Modi on Saturday launched his “Main Bhi Chowkidar” campaign. For some strange reason, sections of the media reported it as Modi’s “first campaign” but it is not. In fact, it is the BJP’s third campaign slogan as they had to drop the previous two, “Namumkin Ab Mumkin Hai” and “Modi Hai To Mumkin Hai”, after they were humiliatingly hijacked by the Congress party. 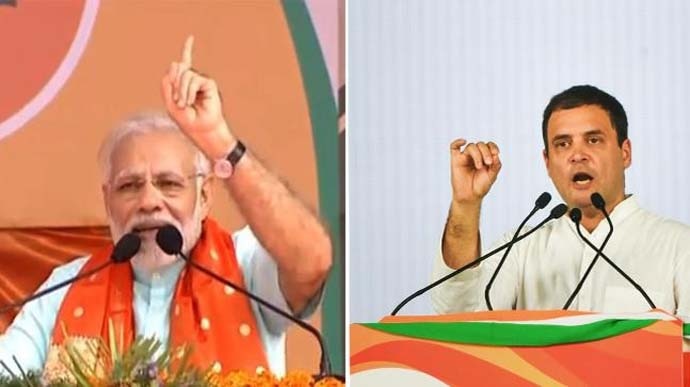 With the netas fighting over who's a chowkidar and who's a chor, will this war of words decide who's the winner? (Photo: India Today)

The slogan Namumkin Ab Mumkin Hai was launched with much fanfare around 20 February 2019, with a 360-degree communication strategy comprising of television ads, full-page newspaper ads and social media hashtag. But within hours of its launch on Twitter, the Congress started posting Modi’s failures and misgovernance using the same hashtag, insinuating that India’s greatest disasters which were impossible before are possible now — thanks to Modi.

The trend became a great source of humour for onlookers — and extremely embarrassing for the BJP.

By the first week of March, BJP re-jigged the campaign and made it “Modi hai to Mumkin Hai”, to make it more Modi-centric.

Till this point, the BJP was seemingly planning to build its poll plank around the narrative of nationalism. However, the Gandhinagar speeches by Rahul and Priyanka Gandhi have forced Modi to come back to real issues — starting with an image makeover.

Rahul Gandhi’s “Chowkidar Chor Hai” jibe has been one of his most successful strategies by far — perhaps even more effective than the “Suit Boot Ki Sarkar” jibe.

Everything about the slogan — from the content to intent to delivery — has captured the imagination of the masses. Unlike Modi’s blitzkriegs which attempt to create movements overnight, Rahul built it up over a long period, one rally at a time. In each rally, he would remind the crowd of Narendra Modi’s speech containing the sing-along “Acche Din” and how the crowd went “Ayenge”. He would then tell them that there is a new slogan, “These days if you say, ‘Chowkidar’, people say, ‘chor hai’”. The slogan captured public imagination so well that by the end of December 2018, in every rally, Rahul had to only begin to say “Chowkidar” — and the crowd erupted into “Chor hai” in the same sing-along style that “Acche Din Ayenge” was.

Each time Rahul would acknowledge the people’s power in the making of the slogan by pausing, smiling and nodding as they sing along. This was in sharp contrast to Modi’s one-liners which, in my view, reflect a great amount of self-aggrandisement like “Wah Modiji, Wah” or “Modi ji Ne Accha Kiya” and seem disconnected from the masses.

The BJP is now trying to reclaim Modi’s 'Chowkidar' image. This is already an acceptance of failure in the perception game because the BJP is now chasing a narrative set by Congress.

Your Chowkidar is standing firm & serving the nation.But, I am not alone.Everyone who is fighting corruption, dirt, social evils is a Chowkidar.Everyone working hard for the progress of India is a Chowkidar.Today, every Indian is saying-#MainBhiChowkidar

If Rahul destroyed Modi’s ‘Chowkidar’ image by conflating it with ‘Chor’, Modi is now trying to conflate it with the whole of India. Inviting the nation to be part of his movement, Modi is making everybody a chowkidar and an equal stakeholder in Rahul’s jibe. Instead of shedding his ‘Chowkidar’ tag, Modi embraced it with more vigour by changing his Twitter name. Every BJP leader also joined him in changing their name and adding a ‘Chowkidar’ tag before their first name.

The messaging was in fact very strong and seemed like a trap for Rahul Gandhi. Any attempt on Rahul’s part to now call Chowkidar a chor would mean he is insulting all the people.

On the face of it, therefore, it seemed that the BJP had won this round.

Except that, once again on Twitter, hilarity ensued with its launch.

The BJP had seemingly used an automatic messaging system — or a bot — to send out mass tweets tagging one Twitter handle at a time, at random, to deliver Modi’s personalised message, thanking the user for joining the “Main Bhi Chowkidar” movement.

Unfortunately, since there was no human involvement, some of the tweets looked like this:

It’s great to see that Modi is still in touch with his buddies. #ChowkidarChorHai pic.twitter.com/191BinitIb

The result was once again hilarious for the Twitter public and embarrassing for the BJP.

The use of BOTs for cross-posting or spamming is not considered an ethical practice in social media communications. One wonders who in the BJP communications team may have come up with such a strange campaign.

Around ten days back, the BJP’s official website was hacked and some embarrassing messages were posted. It was then taken down — and is yet to be restored, making people wonder, how can it take so long to restore a website? For a party that made an early start in the social media sphere, the BJP is apparently suddenly losing control of its tech team. These events, known as “Fail” in geek jargon, are embarrassing and demoralising.

Amidst humour, Rahul Gandhi effortlessly stated the obvious, that Mr Modi is being defensive, which could only mean he could be feeling a bit guilty.

Rahul’s tweet was a clear message that he would not be on the backfoot. In a later tweet, he reiterated that no matter how much Modi tries to clean his image now, the truth cannot be suppressed.

You can keep trying Mr Modi, but the truth cannot be extinguished. Every Indian is saying it. #ChowkidarChorHai P.S: Do force Sushma ji to add “Chowkidar” to her handle. It’s looking very bad.

In the perception game on social media, the Congress has been  ahead of the BJP so far. But does it translate to votes on the ground? Can Congress compete with BJP’s organisational skills at the grassroots and wAmit Shah’s alliance formation? Barely three weeks away from what is being considered India’s last battle to save democracy, does it look like the Congress has the slightest clue about what they are doing?

Post your comment
#Narendra Modi, #Mainbhichowkidar, #Chowkidar chor hai, #Rahul Gandhi
The views and opinions expressed in this article are those of the authors and do not necessarily reflect the official policy or position of DailyO.in or the India Today Group. The writers are solely responsible for any claims arising out of the contents of this article.