Amethi is a fierce clash, one that embodies this election best. But, whatever its results, Amethi already has a winner.

Amethi is about 680 km away from Delhi. But over the last decade, the distance has only been coming down in our political discourse. And, as we witness the fifth phase of polling today, all eyes are on Amethi.

Well, Rahul Gandhi and Smriti Irani are just the tips of the Amethi iceberg. BJP's Face in Amethi: Smriti Irani knows that even if she loses, she wins. (Photo: ANI)

If one constituency can epitomise this Lok Sabha fight, this will be Amethi — a fight between Namdar and Kaamdar — where every political party claims to be the latter.

This is a Lok Sabha constituency which the Grand Old Party has always treated as its inheritance — Sanjay Gandhi, Rajiv Gandhi, Sonia Gandhi represented it in the past. Amethi went out of the Congress’s hand only twice — in 1977, when the Janta Party won, and in 1998, when the BJP won.

The constituency has always stood firmly by the Gandhi family.

The Assembly segments of Amethi Lok Sabha, however, portray a very different picture.

Assembly seats Tiloi, Salon, Jagdishpur and Amethi went to the BJP in 2017.

Only Gauriganj belongs to the Samajwadi Party — where the fight was between the SP and the Congress.

The SP-BSP alliance decided not to field their candidates from Congress bastions (it could have actually made the fight more interesting). So, in effect, there will be no vote-cutting — it's a straight fight between the two young and energetic leaders. Parivaar Outing in Amethi: It's a family seat and the show must go on. (Photo: Twitter)

The curious case of the 'missing' MP

This became part of a political lampooning series in Amethi — putting up 'missing' posters of sitting MP Rahul Gandhi. This happened earlier too. It happened yet again.

Though the posters should not be relied on, the vacuum was notably there — which apparently let Smriti Irani make serious inroads into Amethi.

Even today, as Amethi goes to the polls, Smriti Irani is everywhere: on Twitter, on every TV channel, levelling charges of booth-capturing against Rahul Gandhi, questioning his absence even on voting day.

Rahul Gandhi is missing in action.

We don’t know whether it’s hubris thanks to which he chooses to ignore Smriti Irani, but counters Narendra Modi, with all guns blazing — a fight of images perhaps, where some images are more equal (read 'superior') to others?

But it is also for image-building that Smriti Irani didn’t leave Amethi even after losing to Rahul Gandhi in 2014 by a notable margin.

She made sure she became the default answer to the question — ‘If not Rahul, then who?’ 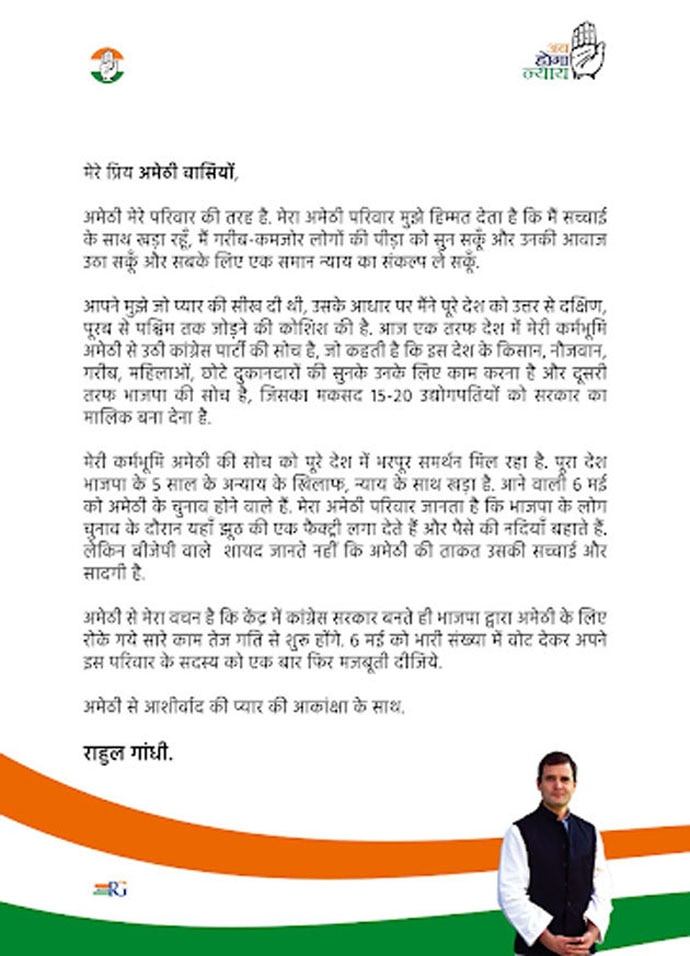 Just a few days ago, a letter written by Rahul Gandhi landed at every Amethi household — a letter in which Rahul Gandhi addressed Amethi voters as part of his 'family'.

He promised that once the Congress comes to power in the Centre, all roadblocks to Amethi projects will be cleared: an assurance that must have been necessitated by the BJP’s vigorous campaign on the ground in Amethi.

Why Smriti Irani is Amethi's winner though

Congress leader Navjot Singh Sidhu has said that if Rahul Gandhi loses Amethi, he will leave politics. Such is the absurdity, apparently, of a possibility that Smriti Irani may actually defeat Rahul Gandhi.

But Rahul’s nomination from a second seat, in Kerala's Wayanad, triggered speculation about whether even the Congress feels that it's on thin ice in Amethi.

Not all defeats are harmful.

Smriti was a total outsider to Amethi in 2014, she used to stay apparently at Ravi Dutt Mishra’s place (who is now in the Congress) and she started to get to know Amethi very gradually.

Five years down the line, she runs a one-woman show in Amethi.

She is the BJP’s face in Amethi.

Even if she loses, a shrinking of the vote margin will in fact make her win in Amethi.

Also Read: With Modi's 'AK 203' package in the Congress borough, can Smriti Irani have a shot at wresting Amethi from Rahul Gandhi?