Rahul Gandhi's Wayanad Poll: Why a closer look at some Muslim factions in the area is an imperative

A closer look at the DNA of Islamist groups based in Wayanad, some of which are supporting Rahul Gandhi's candidature.

On being asked why he selected Wayanad — a Muslim-dominated constituency — as his second choice to fight the Lok Sabha polls, Congress President Rahul Gandhi said he wanted to send a message of oneness in the country. He further added that the BJP and RSS posed a threat to the nation’s culture and were undermining its age-old traditions of pluralism.

What he didn’t say — or what no one asked him — was why he had chosen to contest the election from a seat which was not just Muslim-dominated, but has many sections which are carrying forward a pan-Islamic agenda against the secular notions of India, at the cost of moderate Islam.

Apart from the Muslim League (which is a part of the Congress-led UDF alliance in Kerala) — whose leadership in the 1900s was responsible for the Partition of India and the formation of Pakistan — the Islamic groups supporting Rahul in Wayanad have a frightening air about them when it comes to social harmony and national security. Amongst these groups reportedly are the Social Democratic Party of India (SDPI), whose social wing — the People's Front of India (PFI) — has been accused of the worse forms of anti-Hindu and anti-Christian campaigns in its pan-Islamic garb. The organisation has also apparently been accused of links with the Islamic State.

The reportedly objectionable activities of the PFI are listed as below:

1). Since its inception 12 years ago, the PFI has been accused of various anti-social and anti-national activities. The allegations made reportedly include connections with various Islamic terrorist groups. It has faced charges of kidnapping, murder and intimidation and various acts of religious extremism. It has also reportedly organised arms training camps for Muslim youth. In 2012, the government of Kerala informed the High Court that the activities of PFI are inimical to the safety of the country and that it is "nothing but a resurrection of the banned outfit Students Islamic Movement of India (SIMI) in another form.”

2). Over two dozen PFI workers were accused of attacking and cutting off the hand of a Christian academic in Kerala in 2010, accusing him of insulting the Prophet. The SDPI, which has a presence in 17 Indian states, is believed to be funded by Qatar-based Wahabi businessmen. Amongst the key leaders of SDPI in Kerala reportedly are a Mohammed Koya, founder member of the now-banned Student Islamic Movement of India (SIMI). SIMI members formed the Indian Mujahideen in 2007-2008 and reportedly carried out bomb blasts in many Indian cities. The SDPI has been also been accused of forcibly banning the recitation of Vande Mataram in private schools in Kerala.

3). The SDPI — which has a presence in 16 states, including North Indian states like Uttar Pradesh and Rajasthan — has got an ultra-aggressive student wing called Campus Front of India (CFI). The CFI is apparently trying to radicalise moderate Muslims in other Indian states. The SDPI and its social and student wings follow the Ahle Hadees brand of Wahhabi Islam — which is also followed by the Lashkar-e-Taiba in Pakistan and its founder Hafiz Saeed.

The SDPI has refused to put up a candidate in Wayanad — seemingly in tacit support to Rahul Gandhi. The Congress is known for a pro-Muslim stand. But the Wayanad contest is not without its layers. (File Photo: PTI)

The Kerala unit of the CPM has accused Rahul Gandhi of taking help from Muslim communal forces to remain in power. Kerala CPM secretary Kodiyeri Balakrishnan reportedly said, "The Muslim League, which has formed an alliance with Jama'at-e-Islami and SDPI (the political party of fundamentalist organisation NDF), has more influence in Wayanad than Congress and so, in effect, Rahul Gandhi will be contesting as the joint candidate of the Congress-Jama'at-SDPI alliance."

The Jamat that Balakrishnan is talking about is represented by its political wing, Welfare Party of India (WPI), a Wahhabi party which is reportedly also supporting Rahul Gandhi in Wayanad. The national president of WPI is Jamat-e-Islami leader and All India Sunni Muslim Personal Law Board member SQR Ilyas who happens to be the father of the JNU student leader Umar Khalid — an accused in the JNU sedition case.

Ilyas was the President of SIMI in 1983. But to those who have tracked his activities for long, he is apparently best known as the advocate of a Muslim-dominated polity in India, which aims to create a situation where no party can form a government without Muslim votes. In the news before: SQR Ilyas, national president of Welfare Party of India and Jamat-e-Islami leader. (Photo: Wikimedia commons)

In an interview in 2003, Ilyas had justified posters pasted by the-then SIMI workers in Delhi saying "Destroy Nationalism and Establish Khilafat (Muslim rule based on Sharia)". He had reportedly told the interviewer, “What is wrong in the poster? Nationalism is a fascist idea while Khilafat movement was supported by Congress and its leaders Gandhiji and Pandit Nehru.”

He was alluding to what was, in my view, the historic mistake committed by the Congress and its leaders in 1920, of supporting the pan-Islamic Khilafat movement of India to reinstate the Sultan of Turkey. The Sultan had been dethroned by the British. This was meant to be a trade-off with Indian Muslims, to draw them towards the freedom movement.

It was a quid pro quo. But I would say the Khilafat move of the Congress sowed the seeds of pan-Islamism in the country, which subsequently led to the Partition of India.’

The vision of converting India to Islam?

Once, I, as associate editor-in-charge of India Today in Gujarat, was present when he delivered an out-and-out pan-Islamic speech under the banner of Jamat-e-Islami on January 1, 2006, at the Mehdi Nawaz Jung Hall in Ahmadabad. Addressing the Muslim crowd in the hall, as I heard him, Ilyas regretted why India couldn't be entirely converted to Islam even though Islam had been in India for 800 years. He said, to my hearing, “The Dalits, the exploited and the deprived of this country are waiting for Islam to show them the true path, but what was wrong in our strategy that we couldn't bring them on the true path?”

He paused and added, to my recollection, “On my last trip to Pakistan, Muslims there told me that Indian Muslims have done a great job since 1947. They told me when India was partitioned, Indian Muslims were suspected of being Pakistan loyalists. However, today, their influence in India is such that the Indian government cannot take any major decision without the veto of the Muslims.” 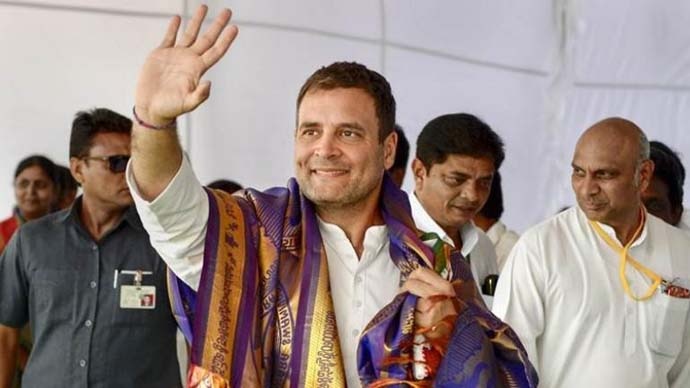 Rahul Gandhi has chosen to contest from Wayanad. The decision could be a tricky one for the Congress. (Photo: PTI)

Narendra Modi and Amit Shah proved him wrong by winning Assam and UP for a BJP-led coalition in 2016-2017. But that is a different matter.

Rahul's decision to contest from Wayanad now apparently with the support of pan-Islamic forces is not surprising if one recalls the Anti-Communal Bill that the Congress was trying to introduce reportedly under the direction of pro-minority and ultra-left NGOs in 2011. The Bill reportedly promised to literally divide the country by giving large-scale concessions to Muslims at the cost of the secular credentials of the country.

The idea of the Bill, which apparently has provisions like making mandatory the posting of a certain percentage of Muslim policemen in every police station, had to be dropped in the face of severe criticism — not just by opposition parties but also a section of Congressmen. By contesting from Wayanad, Rahul might have also nullified the gains the Congress made by playing the soft Hindutva card in the past two years.

The policy of appeasing pan-Islamist Muslims — instead of not engaging common Muslims on the developmental agenda — could prove costly for Congress.

Clearly, to my mind, with Rahul’s electoral fight via the reported help of pan-Islamic forces — some quite crass — the Congress has hit a new low.

Also, this comes at a time when the party is being relentlessly targeted by Prime Minister Narendra Modi and his party on the national security front. Perhaps the party might not be able to recover from this blow in the form of open alignments with pan-Islamic forces because it might be stuck with the label of being “a Muslim party” — or a party that has no hesitation in aligning itself with the most communal and anti-India elements in the Muslim Wahhabi community.

On the other hand, it came as a total surprise last week when a significant number of burkha-clad Wahhabi Muslim women came out in support of the BJP and Prime Minister Narendra Modi in Saharanpur area of Uttar Pradesh — interestingly, where the international headquarters of both the Deoband and Ahle Hadees schools are located.

The contention of these women was that they had benefitted from Modi’s development agenda in the form of scholarships for their children, banning Triple Talaq and other developmental measures undertaken by his government for the Muslim community.

The perfect policy is of engaging with common Muslims on the development agenda — and fighting their pan-Islamic leadership.

In fact, the Minority Affairs Ministry under Union Minister MA Naqvi in Modi’s cabinet has, in my view, done a better job of implementing the developmental agenda for the Muslim community than the previous Congress-led UPA Government.

Clearly, the Congress will have to rethink its strategy on minorities if it wants to remain relevant in the long-term.

#Tukde tukde gang, #Wahhabism, #Muslim league, #Muslim appeasement
The views and opinions expressed in this article are those of the authors and do not necessarily reflect the official policy or position of DailyO.in or the India Today Group. The writers are solely responsible for any claims arising out of the contents of this article.