Over the years, a carefully crafted narrative of 'Hindu terror', apparently even more dangerous than radical Islamist groups, has been built up. It's crucial to call this out now with history and contemporary facts.

Over several years, a myth has been carefully manufactured that “Hindu terror” poses an existential threat to Indian Muslims, Christians and other minorities.

During the Congress-led UPA-1 and UPA-2 governments, this myth was given a label — “saffron terror”.

The crafting was meticulous.

The reported Lashkar-e-Taiba (LeT) terrorist, Ishrat Jahan, killed by the Gujarat police, became a secular cause célèbre. Websites sprang up describing her as an innocent college girl, murdered apparently on the orders of then-Chief Minister Narendra Modi and Home Minister Amit Shah. The narrative was smoothly taken up by certain co-opted media. In Parliament, Home Minister Shivraj Patil spoke darkly of “Hindutva terrorism”. 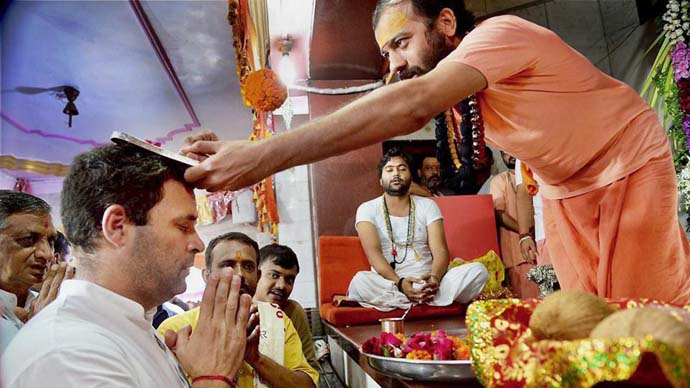 Over the elections, Congress President Rahul Gandhi has transformed into a publicly devout Hindu. (Photo: PTI)

P. Chidambaram, then finance minister, warned of the dangers of saffron terror. Terrorism, he reportedly said, had no religion — but it had a colour.

Rahul Gandhi showed an early predilection for backing such subverted narratives. He reportedly told a visiting American envoy, in a conversation leaked by Wikileaks, that rightwing terror was more dangerous to India’s integrity than Islamist terrorism.

In November 2008 — as if to cruelly mock that assertion — LeT terrorists killed 166 people in two Mumbai hotels, a Jewish outreach centre and Mumbai’s largest railway station, over three and a half days of rampaging terror.

The acquittal of Swami Aseemanand and others in three cases of “Hindu terror”, including last week in the Samjhauta Express case, due to lack of evidence, demonstrates the sinister nature of the plot to paint Hindu terror as a threat to the “idea of India”.

By aligning its position with Pakistan, against the court’s acquittal of Swami Aseemanand, the Congress has once again revealed where it stands on “saffron terror” — the wrong side of history.

Watch my answer. @ANI What major flaws do you see in the current government claim that it has been delivering to the last men, whether it is direct transfer of money or Ujjvala Yojana OR health insurance for poor even direct subsidy Aadhaar card. Where do you see the red lines? pic.twitter.com/xEMa2yR8xe

A cottage industry now exists that also promotes the bizarre position that "saffron terror" is different from “Hindu terror” — this is a direct fallout of the realisation by the Congress and its so-called secular bedfellows, such as the Samajwadi Party (SP), the Rashtriya Janata Dal (RJD) and the Left, that conflating terrorism with Hinduism loses votes.

Meanwhile, Rahul Gandhi’s attempted transformation into an observant Hindu, praying at temples, paying homage to the holy Ganga and visiting sadhus, has been met with an understanding wink from the Congress’ faithful Muslim vote bank.

Muslims know which side Rahul is really on. His temple-love, they nudge each other, is to win elections. Don’t worry about it. He’s our man.

The foreign media is puzzled by all this chicanery.

The Economist noted dolefully that the Congress is no longer “secular”. In a recent cover story on Prime Minister Narendra Modi, it wrote: “The BJP’s main opponent, the Congress party, has largely dropped talk of secularism. Since winning the state of Madhya Pradesh in December, Congress has outdone the BJP on cow protection, budgeting millions to build shelters for retired cattle. Its national leader, Rahul Gandhi, now punctiliously visits temples.”

It added unctuously: “The rival visions confronting India’s 900 million voters have rarely been so sharply defined. Hindu nationalists regard India as a nation defined by its majority faith, much like Israel or indeed Pakistan. On the other side stand those who see India’s extraordinary diversity as a source of strength. For most of the country’s seven decades, multicoloured secular vision has prevailed. But the orange-clad Hindutva strain has grown even bolder. Under Mr Modi, the project to convert India into a fully fledged Hindu nation has moved ahead smartly.” 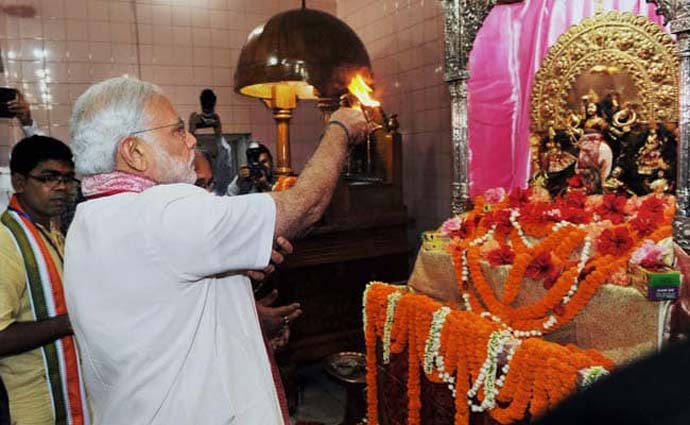 PM Modi is often presented by foreign media as a 'Hindutva icon'. In fact, he hasn't pushed much of a 'Hindu agenda'. (Photo: PTI)

The Economist’s understanding of India’s complexity has never been particularly sophisticated.

Modi has, in fact, done less to drive the Hindutva agenda than both his detractors and benefactors expected. The Economist notes this without recognising, artlessly, how it contradicts its earlier argument on Modi’s Hindu nationalism — “The demand to erect a Ram temple in Ayodhya has not progressed, either. The issue has been stalled in courts for decades. This has not helped Mr. Modi’s standing with the Hindu religious establishment. At this year’s Kumbh Mela, several senior religious figures seemed unhappy. They have been talking of nothing but Ram, Ram all these years, and now they ask us to stop? mutters Swaroopanand Saraswati, the head of two of Hinduism’s most prestigious monasteries. Another high-ranking holy man, his forehead streaked with turmeric, complains that the BJP and RSS are trying to hijack the faith while doing little for issues such as protecting the sacred Ganges river.”

Clearly, Modi isn’t quite the Hindutva icon people expected — it shouldn’t surprise anyone with, unlike The Economist, a passing knowledge of Indian politics.

During his more than a decade tenure as chief minister of Gujarat, Modi ran the Vishva Hindu Parishad (VHP) out of the state, demolished temples that encroached on public spaces, and sent the VHP’s fire-breathing president Praveen Togadia into near-oblivion.

Hinduism has more than one billion adherents worldwide. The other two major religions — Christianity and Islam — have respectively two billion and 1.6 billion followers globally.

Uniquely though, all but around 25 million (2.5%) of Hindus live in one country, India — that is a concentration level of 97.5% in one nation.

The reason, of course, is the sword and the gun.

Christianity proselytised with gunships, Islam with swords. As a result, the subcontinent, with nearly 600 Muslims in India, Pakistan, Bangladesh and Sri Lanka, comprises nearly 40% of the world’s total Muslim population.

And Hinduism? It never proselytised. Its monks went to China, Cambodia, Indonesia and further east to share knowledge — not to convert. The great temples of Cambodia and Indonesia are testament to the benign influence of Hinduism.

The challenge for India’s one billion Hindus now is to embrace modernity, rise above caste that holds so many back, and make Hinduism the all-embracing mother religion it was always conceived to be.

Also Read: How the Opposition is helping Modi win a second term as Prime Minister