Why so Sati Savitri? Making our female netas switch from jeans and skirts to plainest sarees is sheer hypocrisy!

Whether it's female film stars or a celeb neta like Priyanka Gandhi, we are scared of strong women who challenge stereotypes. Isn't that why we force female netas into only 'decent Indian clothing'?

This morning, staring at the Kalboishakhi-doused skyline in the city of my birth, Kolkata, as I dipped my Marie biscuit into a piping hot cup of Darjeeling tea, my eyes fell on the features supplement of the largest national daily (no brownie points for guessing).

It devoted an entire page to which star campaigner is wearing what this election season — the fashion statement of political campaigners hand-picked from the realm of films.

Veteran actress Satabdi Ray, who holds the distinction of being a Lok Sabha MP of Trinamool since 2009, has this to say:

“It’s not just actors; whoever joins politics has to maintain a certain decorum. When I came into politics, many asked me to stay away from lipsticks, wear light-coloured saris and not to use AC cars.”

The picture that accompanies the interview shows her wearing a long-sleeve blouse with traditional jhumka earrings — a far cry from her glamorous image as the reigning queen of commercial Bengali cinema. 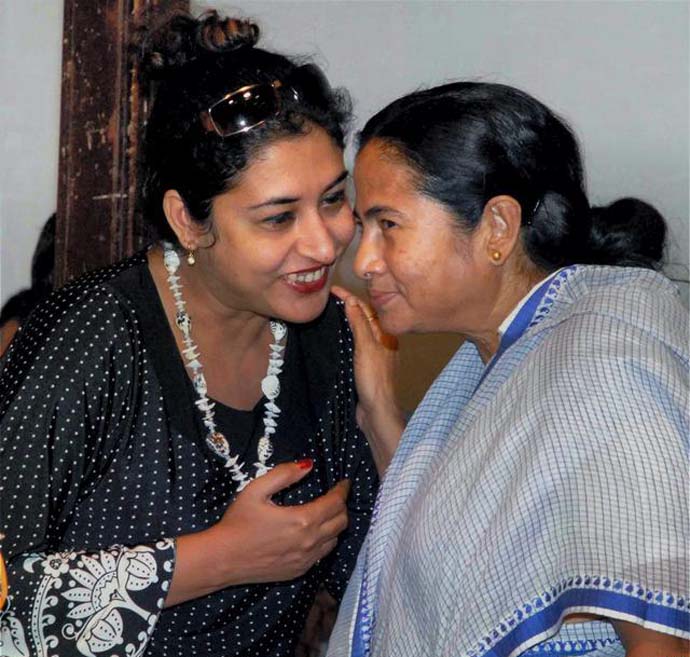 We want to vote for glamour but when it's de-glam! (Photo: PTI)

Barely a week ago, a picture of veteran actress Hema Malini went viral on social media — carrying a bundle of straw, lending a hand to a woman in a remote village — clad in a sari.

According to a report by the Association of Democratic Reforms (ADR) and National Election Watch (NEW), the state of representation of women in the country’s decision-making process remains dismal — with only 9% women MLAs and MPs across the country in 2019.

The ruling Bharatiya Janata Party (BJP) flaunted the highest number of women MPs and MLAs at 150, followed by Congress at 91 and Trinamool at 44.

And yet, women politicians face sexist jibes, their jobs seen more as familial duties and an extension of dynastic politics.

“If a person could become as capable as someone else merely by resembling him or her, then by now we would have had many more Virat Kohlis and Amitabh Bachchans. Duplicates do not work in politics. Priyanka Gandhi might resemble Indira Gandhi, but there is a big difference.”

“She’s very beautiful. But other than that, she holds no political achievement or talent.”

Be yourself: Can't we allow our women politicians this much? (Photo: Reuters/Twitter)

In March this year, Congress general secretary Priyanka Gandhi Vadra’s change of her display picture on Twitter from a ‘play safe, sari-clad, desi’ look to one in a pair of jeans got the social media world abuzz.

Gandhi joined Twitter over a month ago and has 3,54,879 followers (now). And while there was a lot of appreciation from young women, the misogynists weren’t too far behind.

“Priyanka Vadraji’s makeup for election campaign, change the jeans and wear the sari, leave the English and try to make fool in Hindi. Husband is under investigation for list of scams and herself talks about country. Sheer shameless. All her rallies must be boycotted!”

As an Indian woman who is hoping that 2019 finally sees ‘acche din’ when it comes to my sex, I personally find this Sati Savitri-isation of women politicians a massive farce, besides being completely sexist and self-defeating, given the abysmal representation of women in politics in any case.

What I don’t understand as an urban Indian woman voter is — if the reason to hire regional actors or even have Priyanka Gandhi Vadra nosedive into politics is to help a sinking ship, if her switch to smart Western casuals like her brother is an attempt to also woo the urban, elite liberal — whose throat has turned dry from screaming on social media about the dangers of a right-Wing party (never mind that they will not rent their homes to a Muslim or agree easily on their daughter falling in love with a Muslim man), or the artsy circuit which has been on a petition-signing spree, then why do female political candidates camouflage themselves in shapeless saris, covering their heads demurely?

And what is so wrong in a modern Indian woman wearing the clothes of her choice, campaigning in the sordid Indian summers, perhaps wearing a skirt or even a dress, or maybe, keeping it behenji, but, with a tadka, a backless choli?

Not to titillate. Or tease. As is assumed, perfunctorily — but to just be herself.

A well-maintained, confident, sexy woman who walks her talk and isn’t afraid of being slut-shamed, or doesn’t feel her professional expertise has anything to do with her physicality.

Politics is like a day job. Any day job, really!

Why this morally governed dress code that defines and dictates a woman’s character, sending out the implicit — and powerful — message that Western outfits, makeup and flashy jewellery makes a woman appear 'promiscuous', too Westernised — and therefore, possibly not suitable for the work of serving the nation.

Is politics the marriage which sartorially imprisons every woman? (Photo: Twitter)

Is politics like a marriage that comes with some rigid pre-conditions? (The regressive electorate is probably like the nosy prospective mother-in-law who wants the professionally qualified daughter-in-law just the way her obedient son seeks — a Sunny Leone in his head and a pativrata Sita in his heart — but insists that she must be the ‘homely’ type)

Is politics the marriage we all dread, personally?

And while we are on it, let’s not forget to throw some light on the hypocrisy of the political parties who hire these actors and women celebs to gain votes — especially to impress the rural poor — who vote by star power, but who, above all else, also insist on a slow sanitisation of their oomph screen image, by fitting into a gharelu, grihabahu sort of squeaky clean.

More than a vamp? A slut? A tez ladki?

Let’s ask ourselves: What are we voting for, then?

Let us answer, why are we so deeply threatened by women who don’t sport our national costume?

Who didn’t, to begin with.

And why we must stick to the brief?

Also Read: Women in politics are just politicians. They are not saris, jackets, or a particular kind of laughter