The fight for democracy has just begun

Indian society must operate its activist strength on a continuing basis. The election results portray the electoral strength of the people.

Electoral democracy has spoken. The Bharatiya Janata Party juggernaut has defeated its major opponents. The process will be x-rayed with recrimination for legitimate proposals for electoral reform and through election petitions. The result is clear and has to be accepted. However, an election is only one part of democracy for people to choose their rulers.

Truly of the people

Substantive democracy is a continuous process which actively guarantees participatory rights of free speech, association and assembly, right to belief, the necessity of continuing good governance and enabling prosperity for all, especially the least advantaged. These objectives are not born from broken election promises but the ongoing responsibility of continuing substantive democracy. Abjuring any finite separation between civil and political society, there is a need to heed the advice of Pericles: “Here we do not say that a man who takes no interest in politics is a man who minds his own affairs, we say he has no business here at all.”

Western thinking has bequeathed to us a divisive separation of civil from political affairs, which deprives people of their positive duties to sustain democracy between elections. Democracy can never be suspended or left to politicians, still less to those who claim absolute power. It exists in every nook and cranny of the country to address both the power of government and the ills in society itself. News after news reiterates the viciousness and cruelty of Indian society encouraged by the sins of omission and commission of political governance. Electoral democracy is a prelude which can never challenge activist democracy —which in turn keeps government and power structures in check wherever they are — into subservience. 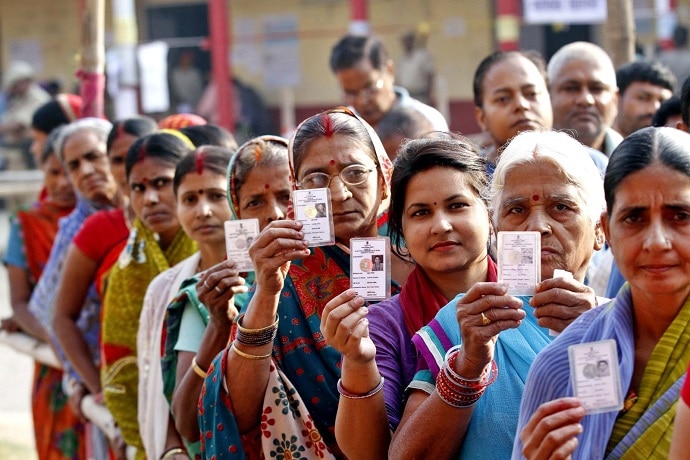 Elections are an integral part of democracy but not the only one. (Photo: PTI)

The foremost challenge for India’s people is to prevent an elected autocracy. The entire Sangh Parivar including the Rashtriya Swayamsevak Sangh (RSS) is behind Narendra Modi. This election empowers them. What may be restored and encouraged are lynching, targeting minorities, ghar wapasi, oppressive anticorruption laws and communalism. Indian secularism has never meant ‘no religion’ but, uniquely, all religions to cement India together. Second, we must preserve free speech and action as the voice of democracy. The last five years have shown a resurgence of offences of sedition as an alibi to arrest activists. Muscular nationalism is counterpoised to silence criticism and hand over critics to Parivar mobocracy. Television is taken over financially and through certain anchors, making TV a global laughing stock. Peoples’ voice is essential to democracy.

Thirdly, we must tackle the excessive concentration of powers. Under Modi, this has included controlling the Central Bureau of Investigation, Central Vigilance Commission, the Lokpal and other agencies. The election campaign has been misdirected towards attacking leaders on half-truths; on the assumption that what destroyed Rajiv Gandhi’s re-election would also destroy Modi’s chances of winning again. That by itself is a mistake.

Today, our democracy is under a financial, commercial and economic takeover by capitalism — both Indian and global.

There are two areas where India is being pillaged: the exploitation of mineral and environmental resources; and contractual deals which reek with corruption. Each deal about India’s resources and contracts has to be examined beyond the flurry of accusations. This is a task for civil society. We live in a global marketplace. Despite Modi’s multi-crore travels, our foreign policy is in shambles. The negative muscular nationalism directed against Pakistan will bring no solace. Peace, not posturing, is the answer. The positive policies are missing. By imitating America and Israel, we have lost the wood for the trees. The US is rewriting global trade. India is suffering from the lack of a cohesive international policy. (Photo: PTI)

India, unlike China, has only begging bowl options. India’s Middle East policy favours Israel. We are in a position to take a lead on resolving the Rohingya crisis. India has allowed Nepal to drift to China and has no Africa policy. This lack of clarity cannot be replaced by spurious symbolic victories on Pakistani terrorists.

The fundamental value of social justice goes to the heart of equal and equitable justice for all people. Dr BR Ambedkar rightly reminded the nation that political justice underlying of “one man, one vote” is insufficient without economic justice for all. Without it, Indian governance would explode. This election has brought to the forefront problems of poverty, sustenance, unemployment, welfare benefits and also the sad plight of farmers.

All sides have promised too much. Will they deliver through both markets and programmes? Or is this a chimera to be addressed in the 2024 election? This, too, is a task for civil society activists.

Noting the decline of unionised power, activists have to ensure deliverance. The Congress, in particular, has much to introspect about its leadership and building cadre strength, without which it is impotent, as is self-evident from this election. Regional parties have to hold their own. Yet political solutions are only part of the answer. Indian society must operate its activist strength on a continuing basis. The election results portray the electoral strength of the people. Our democracy is not a ‘game of thrones’ but the true will of the people to save democracy. Democracy’s fight is not over. It has just begun.