Despite the thumping majority in the Hindi heartland, the BJP has been shown the door in most of the states south of the Vindhyas. Why is it proving hard for the lotus to bloom down south?

With the results safely declared, one factor has stood out in all the euphoria — the Modi-mania that has gripped the nation has made no significant inroads south of the Vindhyas.

Four of the five states have shown their door to the lotus party. This makes it even apparent why that region sometimes feels like a different country from the rest of India. The Modi factor that helped the BJP and the party itself have always remained closely associated with Hindi and the Hindi heartland.

While the party and its strategists have managed to overcome this image in the North-East, the narrative down south differs vastly.

The saffron party has found itself facing the ire of southern Indians on many key issues, ranging from the jallikattu protests in Tamil Nadu, beef ban and flood-relief (or the lack of it) in Kerala and TN, and special status for Andhra Pradesh, to name a few.

Voters in the north have been raging over the Pulwama attacks, the subsequent Balakot revenge, and the Ayodhya temple has always been at the fore of every election narrative involving the BJP. However, that is far removed from the mainstream in the South. As such, the BJP had to focus on local issues to connect with voters in the south.

Even in the last Lok Sabha elections, the Hindi belt brought the party to power with a thumping majority. Not surprisingly, the party has aggressively pursued the promotion of Hindi since then. And it has not worked well for them this time around too — in fact, data from the Centre for the Monitoring of the Indian Economy shows that southern states — Tamil Nadu and Andhra Pradesh especially — feel that their state is slighted by the BJP. In a survey by the Centre for Study of Developing Societies, respondents across the country were asked whether they think the country is headed in the right direction.

Here is the response:

In a parallel pre-poll survey by CVoter, results showed that Modi is tremendously popular around most of the country. States like Rajasthan and Madhya Pradesh that went to the Congress even as recently as the Assembly polls in December 2018 registered a whopping 60% satisfaction rating with Modi's performance as the Prime Minister.

No so easy down south though.

Here are the figures for Modi’s popularity in the South:

In fact, as the results were even being declared, it was clear that south India is the only part of the country that systematically voted out the BJP (barring Karnataka — the BJP’s stronghold) and opted for regional parties or the Congress-led alliances. The gap in numbers has widened over the years. As far as Karnataka is concerned, the BJP is presently the principal opposition in the Assembly. In the past, it has formed a government twice in coalitions, and its own government ruling the state from 2008 to 2013. Even in 2018 Assembly results, while BJP fell short of a majority, it was the single largest party. All hail the captain: Karnataka has been BJP's stronghold and its only inlet the south of the Vindhyas. (File photo: PTI)

However, things didn’t go as planned for the saffron party in Kerala. It played its strong card of Hindutva in the Sabarimala issue. However, forget winning the state, it could not even establish a hold in Pathanamthitta — the constituency that houses the shrine. The BJP candidate, in fact, stood third behind the Congress and CPI candidates. Further, the Rahul factor has greatly helped the Congress-led UDF in the state. With the Congress president contesting from Wayanad, Malayalis have put their complete energy behind the Congress and the alliance it leads. Rahul Gandhi won the Wayanad seat with a record margin of 4,31,770 votes.

Not even the Left that is disastrously left with practically no seats in the Lok Sabha from Kerala, could withstand this wave. And this, despite the Left Democratic Front dominating way more than half of the Kerala Assembly.

Telangana, however, came as a shocker vis-a-vis trends. The state recently gave the Telangana Rashtra Samithi (TRS) a thumping majority in the Assembly polls. The same feat was expected this time around too — however, the saffron party managed to make inroads in the state by winning four Lok Sabha seats. Telangana has 17 Lok Sabha seats. Not only did TRS lose two seats from the 11 it had won in the 2014 Lok Sabha Elections, but Kavitha Kalvakuntla (KCR's daughter) also lost the Nizamabad seat to BJP's D Aravind by a margin of over 70,000 votes. Not just the seats, the BJP also significantly improved its vote tally from the 2018 Assembly polls. In December last year, KCR won with 46.9% vote share and the BJP bagged a measly 7.1% — the results now show that the party has bagged nearly 23% of the vote share in the 2019 Lok Sabha polls.

Telangana is one among the Mission-7 states listed by BJP chief Amit Shah for expansion in states that have traditionally remained difficult terrain for the party.

The party president himself travelled extensively across the country in the last two years (starting from Telangana) in what was called the “vistarak” (expansion) programme. Clearly, the measures seemed to be making an impact on the ground. It is to be seen if KCR is able to do course-correction in good time. The situation has gone south for the saffron party in southern India. (Representational photo: India Today)

As far as Andhra Pradesh is concerned, the state has been reeling under anti-incumbency under the Chandrababu Naidu-led TRS government. The state has thus seen a sweep in favour of Jagan Mohan Reddy and the YSRCP in the state. In Assembly seats, Jagan's party won 151 of the 175 seats (with the TDP and Pawan Kalyan's Jana Sena alliance bagging 24 seats) and Jagan announced, even when the leads were pouring in on Thursday, that he will take oath as the Chief Minister on May 30, 2019.

In the Parliamentary seats, Jagan's YSRCP has won 22 of the 25 seats. While Naidu has lately been seen a lot with leaders of the Third Front, the fact remains that the TDP continues being seen as the BJP’s ally, as it has traditionally been since its inception in the 1980s. Whether or not Jagan now becomes a part of the NDA is a question the country is waiting for an answer to. 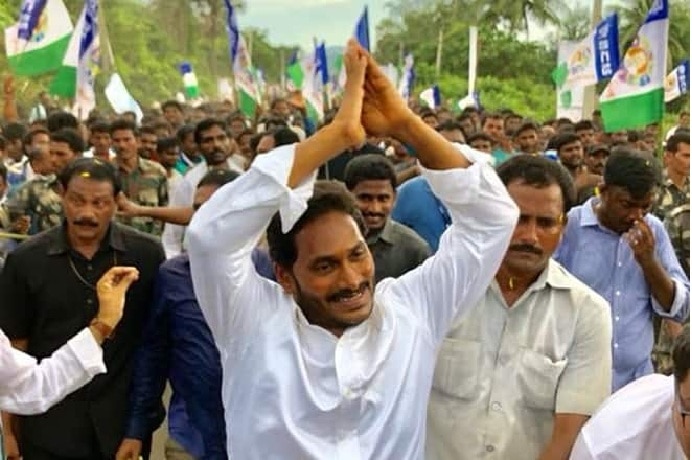 It is more of a typical regional factor in Tamil Nadu that has traditionally been a thorn in the BJP’s flesh, with an old anti-Modi sentiment. The southernmost state of India is the bastion of the Dravidian movement. With the perception of the BJP being a Hindi-land party and its professed stance of hard-line Hindutva, it has barely found any resonance in the state. In fact, it has the weakest BJP foothold compared to any state in the country.

The state has 39 seats in the Lok Sabha and had seen polling in all of them, barring Vellore, due to reported abuse of money power, on April 18, 2019.  Of the 38, the BJP-led alliance won one seat and the DMK-led alliance won 37 seats. Key losers from the BJP camp include former union minister Pon Radhakrishnan who lost to H. Vasanthakumarof the INC.

In 2014 too, the party won one seat of the 39 in the Lok Sabha elections. If the saffron party thought back then that it was making its entry with that one seat, they were sadly mistaken. In 2016, the BJP was washed out. The difference between Assembly polls 2016 and Lok Sabha polls 2019 is that the state lost both the faces of leadership that it had for close to three decades — this is Tamil Nadu’s first major election after the deaths of former chief ministers M Karunanidhi and J Jayalalithaa.

The BJP and the Congress have reconciled themselves to playing a secondary role in the alliances, having won 1 and 0 seats, respectively, in the state in the last elections.

Despite the ruling AIADMK joining hands with the BJP, the voters have worn their Tamil sentiment on their sleeve and shown the door, not only to BJP but also to the AIADMK, PMK, DMDK and Puthiya Tamilagam that chose to ally themselves with the national party. The DMK-Congress alliance led by the regional party won a whopping 36 seats.

In an absolute embarrassment for the BJP-led alliance, the saffron party lost all major seats (including Kanyakumari, which was the constituency of union minister Pon Radhakrishnan).

It is certainly clear that the NDA is sorted for the next five years at the Centre. However, it is breaking into the tightly guarded fortress of the south — be it via religious appeal or other attempts — which is going to be its hugest challenge. Going by Lok Sabha 2019, it seems unlikely that the region is going to be charitable to the lotus party anytime in the near future.