I made a promise to Javed Khan. But Congress alone can't keep that promise

It had been a long day, and since I had woken up early to catch the first flight out to Delhi (I am one of those same-day-return-to-home types), the red eye beckoned. By the time, the airplane soared above, I had dozed off.

My reverie was short-lived, however, as the gentle flight attendant reminded me that I had the onus of ordering a snack and a drink courtesy my pre-booked corporate privilege. There was a young man seated next to me who I suspected suffered from the same predicament; he appeared equally dysfunctional when asked to make his preferred choices. We exchanged smiles, perhaps appreciating our mutual discomfiture with exemplary professional airlines service. Some more sleep would have done wonders for our spiritual constitution. “Are you the same Sanjay Jha we see on TV ?” , asked the curious countenance of the young man giving me a look of palpable incredulity.

His face suddenly brightened up, like a big pancake that has hot maple syrup poured over it.

In politics, nothing enthuses you more than voluntary public support. He was a highly qualified, 27-year-old chemical engineer, who worked with a corporate firm in downtown Mumbai. He was an apposite manifestation of India’s demographic dividend, the aspirational middle-class seeking greener pastures, and one who was intrepidly walking the road less-travelled.

Often in the past, I have made long conversations with people while travelling, but only exchanged formal introductions at the very end.

It is incongruous actually, and I have since made a behavioural correction.

“Sir, I want to ask you a question. Will the Congress party win the 2019 elections?”

“Are you very worried?” I asked him, while being fully aware of why this innocuous simple soul was probably disturbed.

“Sir, I have already started applying for a job overseas. It seems strange to say this, but I am feeling insecure in our own country. My mother anxiously devours news all evening and looks permanently worried these days. Then she narrates to me the ferocious fights that happen on the screen”.

I felt terribly devastated hearing that from a fellow Indian with a robust professional career ahead of him. 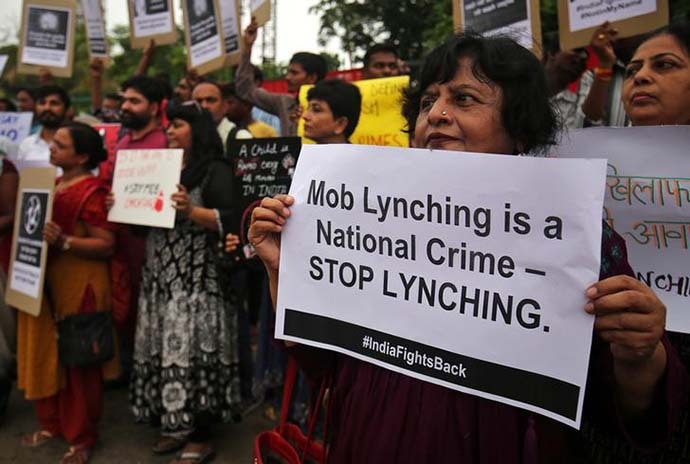 The 'other' story: 27-year-old Javed (name changed) told me that he already started applying for a job overseas.

This was not just an accidental, anecdotal occurrence, but perhaps the dominating mainstream sentiment amongst many minorities.

On television debates every night, many suited-booted corporate tycoons unleash their well-remunerated merchants of poison distribution on essentially unsuspecting audiences unaware of their real agenda; to sell the ruling party’s political game-plan in return for big-ticket pecuniary favours and acquiring other strategic assets.

It is a rehearsed trapeze act, the hate-brigade works with extraordinary synchronicity. It is taking its toll.

Love Jihad, Ghar Wapsi, Beef Bans were all caffeinated with unambiguous bigotry, which was their central theme.

The horrific lynching epidemic that has shamed India (compelling the Supreme Court to publicly castigate the government for giving a free hand to violent mobocracy, and instructing them to frame a new punitive law) is proving to be the proverbial straw that broke the camel’s back.

Surely, when a senior Cabinet minister does a photo-op with convicted murderers of a heart-breaking lynching victim, and the Prime Minister keeps a resplendent silence, the message is overwhelmingly clear.  After Rakbar Khan’s barbaric killing, when a BJP leader blames it on rising Muslim population, you know that moral perversity has scraped new-lows and humanity itself is in a state of frozen hate.  That’s why Javed Khan wants to leave India. The message is overwhelmingly clear.

A day later in Mumbai, I meet a familiar face, I often encounter at social gatherings.  He is an affluent stockbroker staying in a plush South Mumbai residential tower.

“India has just one problem, and that is its population. We solve that, and everything else will be fine,” he pontificates.

“Among other things,” I gingerly caution him.

“We are a fractured society, and the recent lynchings are a gruesome refection of that”.

“I don’t think so.”  Visibly exasperated but keen to avoid a verbal kerfuffle, I ask him, “The lynching deaths don’t offend your sensibilities?”

“Are you serious? Can I actually mention this in an article I propose to write without mentioning your name?” I ask, completely flabbergasted.

The truth is that he was genuinely disinterested in Rakbar Khan and Alimmudin Ansari. They were just an exasperating intrusion into the otherwise glistening pink papers where the roaring Sensex just transcended 37,000.

As Javed Khan said goodbye to me around the midnight hour at the Mumbai domestic airport, he appeared cheerfully optimistic for the first time when I told him, “Tell your mother not to worry. You will not have to leave our country.”

But Javed Khan does not need just the Congress party to keep him back. He needs the very country where he was born to stand for him. He needs us. He is one of us. He is not the other.