M Karunanidhi passes away: The Kalaignar of Tamil Nadu who was loved by his cadres

The 94-year-old leader who passed away on Tuesday was more than just a party chief to DMK members — he was a mentor, a friend, an inspiration, and an emotion.

Fifty-four-year-old Sarathy is a known face in Anna Arivalayam, the headquarters of Dravida Munnetra Kazhagam (DMK). Sarathy makes a living selling peanuts. A regular at the DMK headquarters, whenever party chief M Karunanidhi is present on the premises, Sarathy joined the party when he was barely 20 years old.

An ardent fan of M Karunanidhi, also known as 'Kalaignar', Sarathy's face lights up when he recalls his experiences of meeting the leader. It's a story Sarathy, who comes from a family of DMK sympathisers, is never tired of telling.

"I don't remember the year exactly, Kalaignar was at Arivalayam and suddenly I got a call to come inside the office. Kalaignar asked my name and bought peanuts and asked me to give some more to all the leaders present in the room." 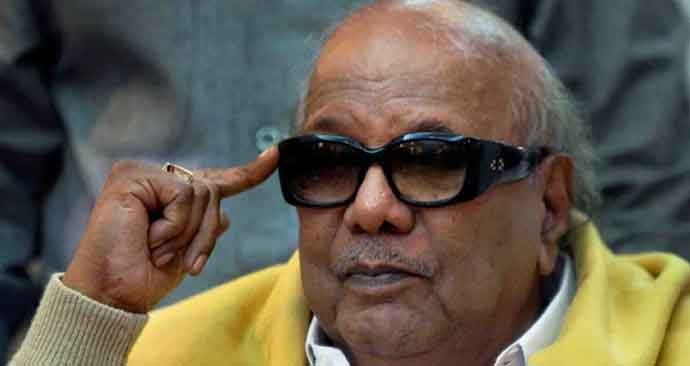 For Sarathy and many other loyal supporters like him, 94-year-old Kalaignar — who was being treated for urinary tract infection and other age-related ailments until his passing on Tuesday, August 7 — and his unparalleled leadership kept them spellbound till date.

Every time Karunanidhi started his sharp-witted speeches with the famous words, "En Uyirinum melaana anbu udanpirappugale (my beloved brethren who are dearer to me than my life)", the crowd turned hysterical.

Few days before.. #Karunanidhi with his grand children's pic.twitter.com/NT2uhEsQ2u

The DMK is a party that has prided itself on being cadre-based. And Karunanidhi was always deeply popular with the cadres. He knew all the functionaries by name and sometimes surprised the lowest-rung functionaries by calling them out from amid a crowd. Kalaignar's unusual energy and talent saw him treat the party as his first priority.

Noted author R Kannan says the heart of the DMK's success lay in its strong cadre connect with Karunanidhi. An extraordinary speaker and writer, Kalaignar penned some 4,000 letters, famously addressing the cadres as 'siblings'.

"His connect with the cadres as well as with the public was such that he superseded senior colleague Navalar Nedunchezhiyan to succeed party founder CN Annadurai. Those who worked hard and delivered saw themselves moving up the ladder. No wonder that he has been the leader of a party for 50 years in a row. He symbolizes an era."

DMK founder Annadurai trusted Karunanidhi with building the party after the break from the Dravidar Kazhagam. Anna sent Karunanidhi to resolve differences between local leaders of the DMK, which the younger man did with great competence.

Senior journalist S Murari credits Karunanidhi for imparting political education to cadres through the party mouthpiece Murasoli and making them aware of social issues that concerned the state.

"His accessibility to cadres was a big plus point along with the inner party democracy that has gone a long way in holding the party together."

In the early 1960s, it was largely Karunanidhi's energy and rapport with the cadre that helped shape the DMK into a massive political army.

Journalist and author Sandhya Ravishankar attributes Karunanidhi's bond with the cadres as the fulcrum of the party. "He would sleep next to them ahead of big rallies even as pandals were being put up, eat with them, work with them. Karunanidhi is more than a leader to his cadre — he is an emotion to them, a mentor and a friend."

Almost everybody in Tamil Nadu agrees that Karunanidhi, a multifaceted personality, is loved by the cadres, not just for his Dravidian ideology, but for his indomitable spirit that saw Kalaignar win many political battles.

#Stalin, #Tamil Nadu, #DMK, #M Karunanidhi
The views and opinions expressed in this article are those of the authors and do not necessarily reflect the official policy or position of DailyO.in or the India Today Group. The writers are solely responsible for any claims arising out of the contents of this article.