14 years of BJP rule in Madhya Pradesh: Will Congress pull through?

Like PM Modi, Shivraj Singh Chouhan too has made elections his priority, and often at the cost of governance.

For the past 14 years, Madhya Pradesh has been ruled by the BJP. And even though many in the state think that the BJP is invincible, a desire for change is gradually gaining strength.

It seems that the people of the state may finally choose the Congress over the BJP. This is also indicated by the Congress’s successive wins in four by-elections in the past one year.

However, going by the full-page advertisements of chief minister Shivraj Singh Chouhan in local newspapers, an uninformed observer is likely to conclude that Chouhan is as popular as before.

Like Prime Minister Narendra Modi, who was once his contemporary, Chouhan too has made elections his priority, and often at the cost of governance.

In the past decade, the chief minister has projected every election victory (big or small) as his own alone. 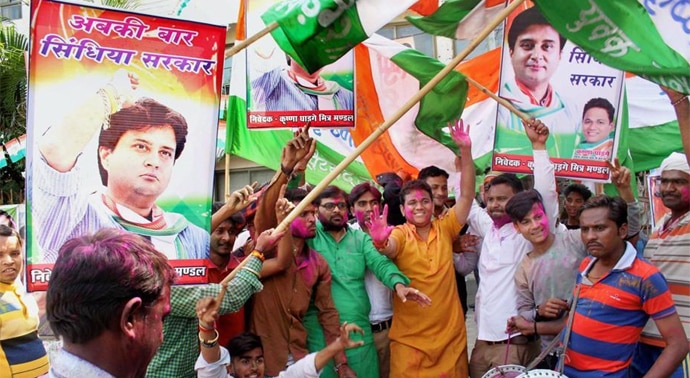 Unsurprisingly, his detractors believe that the Madhya Pradesh chief minister often ignores government work for election work.  However, with recent losses in by-elections, Chouhan’s critics in his party have been quick to lay the blame for the loss at CM’s door.

One of those is former BJP MP Raghunandan Sharma who said, that the loss in the Mungaoli and Kolaras by-elections was "failure of one person and not of the party".

‘Management’ of governance and democracy

In the past 12 years of Chouhan’s rule, the BJP-RSS combine (it’s hard to distinguish between them in MP), have ensured that their workers and functionaries are benefitted financially, often, through government contracts, tenders and schemes.

Most of the public works are now executed by BJP workers-turned-contractors. A majority of the state’s locally elected bodies like "mandis", marketing and cooperative societies and municipal bodies are now controlled by the BJP and so is the flow of government funds.

The BJP-RSS and the Shivraj Singh Chouhan government have made it routine to organise massive functions in the name of festivals, anniversaries and occasions at huge costs incurred by the state exchequer.

In addition to such functions, a number of other religion-based events are organised by the BJP-RSS  network of cadres and workers.

BJP MLAs and local leaders in their constituencies and areas of influence replicate this template of event management.

These are almost always conducted in the presence of priests and "godmen" of questionable reputations.

Unsurprisingly, those of us living in MP have not failed to notice a sharp growth in the number of religious (Hindu) events and pseudo-religiosity in the state over the past decade or so.

More shockingly perhaps, even government officers are expected to use their clout and arrange for logistics and even crowds for such events.

Under the threat of falling out of favour with their political bosses, the officers quietly do as expected.

A large number of government-appointed or government-dependent ASHA and Aanganwadi workers as well panchayat secretaries form a bulk of crowds at such gatherings.

In fact, the BJP government in Madhya Pradesh has become so brazen that is has been issuing formal orders to district collectors and other officers asking them to bring in crowds.

The most recent example of this is a meeting of workers organised in Jabalpur on February 24.  Naturally, governance is the loser in all of this.

Although government officers are not given to airing their views publicly, the fact is that all over the state, officers are fed up of doing what is essentially the political work of the government for more than a decade.

My own sense is that most of them genuinely want a change in government in the upcoming assembly elections in the state. They are so pestered by the government that whenever a retired bureaucrat happens to talk about the "good old days", they bluntly retort, "Sir, please don’t talk about those days. Things have change drastically since then".

While the BJP has been successful in expanding its base across castes and tribes, often through religious gurus, the Congress has all, but lost its traditional voter base among Muslims, STs, and SCs.

In the 2013 Assembly and 2014 Lok Sabha elections, these communities voted massively in favour of the BJP.

In many areas of the state, the Congress doesn’t even have booth-level workers, the BJP, on the other hand, has acquired remarkable expertise on booth management.

However, the upcoming Assembly elections are going to be Congress’s best shot at unseating the BJP from power.

According to some surveys there have been more than 150 scams covering many ministries in the MP government in the past years.

The biggest and the most infamous of these is the Vyapam (recruitment and admission) scam.  Although it has to be  remembered that the Congress has so far not been able to "exploit" these scams to its own political advantage. The reason for this is an open secret: Congress is a divided house in Madhya Pradesh. Its four major leaders, Kamalnath, Digvijaya Singh, Jyotiraditya Scindia and Arun Yadava have shared a public stage barely once in the past year.  With just a few months to go before the elections, a planned endeavour to reach out to the state’s people is still not visible.

The grand old party’s problems are further compounded by a crippling crunch of funds  - an area in which the BJP is far ahead.

A large section of Congress workers and the general public believe that only with Scindia as its CM-nominee does the part have any chance of defeating the BJP.

The reasons for this are three-fold: Scindia enjoys a clean image, has freshness of approach and youthful appearance, and is a good orator.

If Scindia is soon declared the Congress’s chief ministerial candidate and allowed to work with a free hand then the party will be able to galvanise public mood in its favour. However, the Congress is known to remain in hibernation until the last moment and for not taking the right decisions at the right time.

Scindia too needs to step out of his traditional fiefdom of Guna and Gwalior and reach out to the entire state if he is to be a serious contender to incumbent chief minister Shivraj Singh Chouhan.

Despite the handicaps mentioned above, the Congress can come back to power because the people of the state desperately want a change.  Whether it is on social indices like IMR, MMR, malnutrition and education, or crimes against women, Dalits and children, Madhya Pradesh is at the bottom of the spectrum. A large section of people in the state depends on agriculture and feels that it has neither been getting its due nor any real and meaningful sympathy despite a large number of farm suicides in the state.

Along with this, corruption has become rampant in the state and has infected every level and arm of the government. There is no respect for government administration and credibility of government is at an all-time low; ideas like the "Ministry of Happiness" only underscore the grave intellectual and policy-level bankruptcy of the government.

The only visible signs of any development in the state are roads and improved electricity supply, but these too are now crumbling because of corruption and mismanagement.

In short, the people of MP want change, but the question is: can Congress get its act together in time to be an alternative?

#Congress, #Shivraj Singh Chouhan, #BJP, #Madhya Pradesh Assembly elections
The views and opinions expressed in this article are those of the authors and do not necessarily reflect the official policy or position of DailyO.in or the India Today Group. The writers are solely responsible for any claims arising out of the contents of this article.