Forging an alliance with BSP and Gondwana Gantantra Party could benefit the Congress on 70 seats.

The Congress, which has taken the Gondwana Gantantra Party (GGP) – that has a small hold in eastern Madhya Pradesh (MP) – on-board, is keen to have an electoral pact with Mayawati’s Bahujan Samaj Party (BSP) for the upcoming Assembly polls.

The pre-poll alliance of Congress-BSP-GGP could help the combine benefit on 70 seats, where the victory margin in the last election was around 10,000 votes. In the 2013 Assembly elections held for 230 seats, the Congress had won 58, while BSP had secured four seats only. On 10 seats, the BSP stood second. There were 62 seats on which BSP had got 10,000 votes. 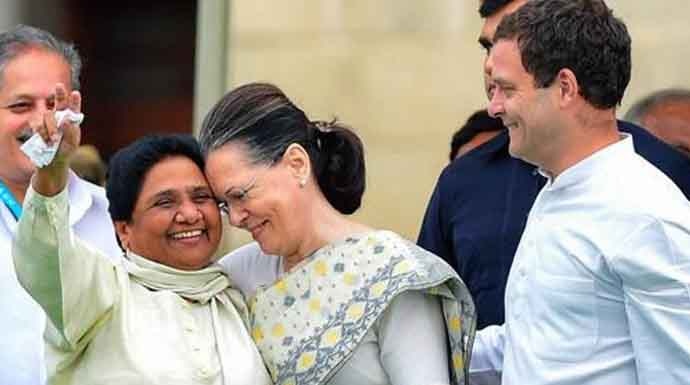 On 17 seats, BSP had polled more than 20,000 votes. The BJP had formed the government in the state by winning 165 seats.

Though, GGP could not win significant seats in 2008 and 2013, it wields significant influence over the tribal votebank. It was for this reason that in 2013, GGP was able to get more than 10,000 votes on 10 seats namely Dindori, Bichhiya, Niwas, Keolari, Jaitpur, Beohari, Jaisinghnagar, Shahpura, Lakhnadon, Pushprajgarh.

Therefore, in a successful alliance is forged, the votes polled by the Congress and the BSP in 2013 elections put together would bring them closer to the BJP’s tally. If the Congress embraces BSP and GGP, the combine could become a formidable force and win on 140-150 seats, much above what is required for the majority.

For the past 20 years, Mayawati’s party’s performance has been steady bagging a seven per cent vote share across Madhya Pradesh. If the Congress vote share of 37 per cent in the last elections is added, then the Congress and BSP alliance is likely to give the BJP a jolt.

But rubbishing the anti-incumbeny against its chief minister Shivraj Singh Chauhan, the BJP is highlighting his pro-development image and the work done by him during his tenure, for the party’s successful comeback.

The Congress feels that 15 years of Chouhan’s governance has built enough anti-incumbency against him and it hopes that getting its act together would help it put an end to the BJP in Madhya Pradesh.

Also, while the BJP focuses primarily on Other Backward Class politics (OBCs), Congress aims to win the Dalits and other castes in Madhya Pradesh.

Therefore, the Conress sensing a good opportunity this time, has extended an olive branch to ideologically similar parties to form a strong allinace to take on the BJP. Working in this direction, Congress president Rahul Gandhi recently met state party chiefs and AICC in-charge of poll-bound states of MP, Chhattisgarh and Rajasthan to assess the party’s preparation for the elections and sought a detailed reort on the possible alliances.

There is also a possibility that Madhya Pradesh may see the BSP, the Samajwadi Party (SP) and the Congress fighting on the same side, a scenario already in the works in Uttar Pradesh. The SP can give a boost to the Opposition as MP has a sizable Yadav population.

The MP alliance is also being seen as a precursor to a wider alliance with BSP in Rajasthan and Chhattisgarh, where the BSP has a similar vote share.

Post your comment
#Congress, #BSP, #Mayawati, #Madhya Pradesh election
The views and opinions expressed in this article are those of the authors and do not necessarily reflect the official policy or position of DailyO.in or the India Today Group. The writers are solely responsible for any claims arising out of the contents of this article.