What do the two state assembly elections say for BJP?

India Today Group Editor-in-Chief talks about the challenges Devendra Fadnavis faces in the next five years, in the November 4 edition of India Today magazine.

A little over five years ago, Prime Minister Narendra Modi burst onto India’s national firmament, leading his party to victory in the May 2014 Lok Sabha election. Five months later, the BJP went on to record electoral wins in Maharashtra and Haryana—two states where it had been floundering in the political wilderness for several years. History has repeated itself somewhat this year, but with a difference. Prime Minister Modi returned to power in May 2019 with a majority even larger than last time. The BJP has now emerged as the leading party in Maharashtra and Haryana, but it has not been the sweeping victory the party was expecting. As we went to press, the BJP was leading in 101 seats in Maharashtra but this is a drop from its 122-seat win in 2014. They will, however, form a government with their ally Shiv Sena. Similarly in Haryana, the party bagged a simple majority with 47 seats in 2014. In 2019, they were locked in a dead heat with the Congress at the time of going to press.

The message from these two state elections is this: Prime Minister Modi can win general elections because of his charisma and national issues, but this doesn’t seem to apply any more to states, where local issues dominate and where regional leaders are held accountable. In both Maharashtra and Haryana, the party faced a dispirited and divided opposition which nonetheless seems to have fought back. This calls for some introspection within the ruling party. 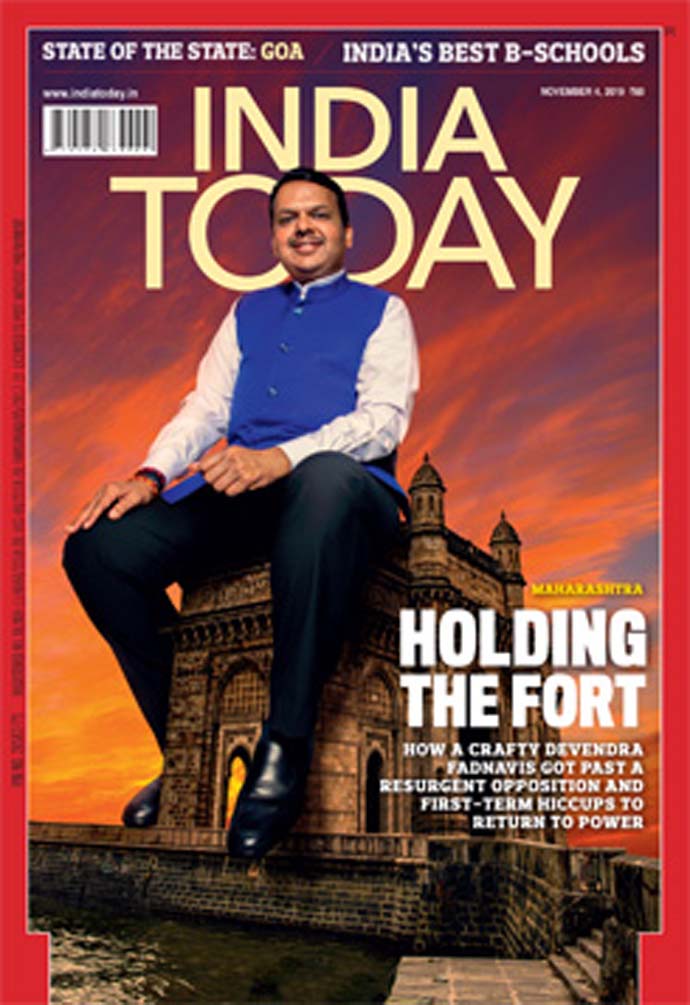 However, if there is a winner in these elections, it is Maharashtra chief minister Devendra Fadnavis. He is the first CM in the state in 47 years to complete a term and now the first non-Congress CM to get re-elected. In 2014, I had asked BJP president Amit Shah why the party had chosen unknown faces to head governments in Haryana and Maharashtra. “We grow our leaders,” he replied. “We don’t impose them from outside.” This is a lesson the other parties can pay heed to.

The BJP’s gamble of choosing Fadnavis in Maharashtra has paid off handsomely. He has steered a steady course for the past five years, weathering a series of political storms—from caste agitations to a recurring drought, deepening agrarian distress and an industrial slowdown in the country’s most industrialised state. He has also successfully tackled a recalcitrant ally, the Shiv Sena.

The Fadnavis formula for success has been one of extraordinary political manoeuvre—from carving out a quota to placate agitating Marathas to doling out sops for farmers and downsizing his political rivals. Governing India’s most industrialised state, with four diverse regions, has always been a challenge; only a handful of stalwarts have been up to the task. Fadnavis has joined that pantheon.

Our cover story, ‘Holding the Fort’, by Associate Editor Kiran D. Tare analyses how Fadnavis overcame his hurdles, and the challenges he faces in the next five years. A resurgent Sena is likely to bargain hard for cabinet portfolios while the opposition, including Sharad Pawar’s NCP, has also done better than expected. Recurring drought, the agrarian crisis and the task of fixing Mumbai’s broken infrastructure remain challenges. The metropolis is India’s growth engine, accounting for 32 per cent of overall direct tax collection, and sustains the banking, finance and entertainment industries. Its sustained neglect—crumbling infrastructure, flooded precincts, collapsing railway foot overbridges and scarred roads—are an international disgrace. Fadnavis’s infrastructure push has revived long-dormant projects like the Mumbai Metro, the Nagpur-Mumbai Super Communication Highway and the Navi Mumbai airport.

These will help decongest India’s densely packed commercial hub and speed up connectivity with the hinterland. Holding the fort will be a full-time job; Fadnavis will once again have to prove his mettle.

Meanwhile, the lesson for the BJP after these state elections remains: regardless of past victories, you cannot take the voter for granted. For the opposition, there is always an incumbency factor, but you have to know how to harvest it.

(India Today Editor-in-Chief's note for the cover story, Holding The Fort, for November 4, 2019.)

Also read: Takeaways from Maharashtra polls: Congress-NCP fought to save face, BJP like there is no tomorrow