Takeaways from Maharashtra polls: Congress-NCP fought to save face, BJP like there is no tomorrow

Even before Maharashtrians stepped out to vote, the opposition parties seemed to have given up on aspirations of winning the state. The Congress and NCP are not fighting to win seats, but to prevent an embarrassing rout like the 2014 elections.

This has never been the case before.

While in the opposition from 1999 to 2014, the Shiv Sena and BJP were constantly vying to win the Chief Minister's chair. Even when all the parties contested separately after a long time in 2014, the motive was to win the state even though the general atmosphere was anti-Congress.

It could not have been any different this time.

Here are the key takeaways based on the election campaigns run by various political parties:

1) With its tactical and centralised campaigning, the BJP dominated the election campaign. Chief minister Devendra Fadnavis conducted over 65 rallies all across the state. Prime Minister Narendra Modi was brought in for nine rallies, home minister Amit Shah conducted 10, and one of BJP’s state campaigners, Yogi Adityanath, also conducted 10 rallies. Minister for road transport and highways and son of the soil, Nitin Gadkari, was confined to Vidarbha. However, that did not deter him from conducting 35 rallies, giving BJP the edge over its opponents. In the 'Maha-Yuti' alliance that comprises BJP, Shiv Sena and smaller parties, BJP is contesting 150 seats and Shiv Sena is contesting 124. BJP's campaign was star-studded and has given the party a massive edge over the opponents. (Photo: Reuters)

2) The Congress campaign remained confined to micro-level campaigning as opposed to BJP’s state-wide outreach. This could perhaps have been part of the party’s strategy. Rahul Gandhi conducted an abysmal eight rallies. Despite being requested by the local party workers to be a part of rallies, Congress president Sonia Gandhi and Priyanka Gandhi Vadra stayed away from campaigning. This left Congress trailing in the campaign.

3) While Congress did not get the much-needed push from its high-command, the alliance partner Nationalist Congress Party's (NCP) leadership was at its energetic best. The 79-year-old NCP chief, Sharad Pawar, conducted over 60 rallies. The speech he delivered in Satara despite getting drenched in heavy rain went viral, and was perhaps the biggest hit of the campaign. The NCP is contesting on 121 of the 288 seats in Maharashtra Assembly. The question is whether NCP will make up for the lacklustre campaign by the Congress and give the much-needed life breath to the 'Maha-agadhi' alliance between the two parties.

4) The BJP and Shiv Sena had given the impression that they would be contesting separately even until the Lok Sabha polls. Fadnavis and Sena chief Uddhav Thackeray had urged their party cadres to be prepared to take on each other's parties. However, when the alliance and seat-sharing were announced, many candidates lost the hope of getting a ticket and rebelled against their own parties. The rebels from both the parties alone constitute 50-odd seats and it is going to be an interesting battle in these constituencies. However, it remains to be seen if the Congress-NCP alliance will reap the benefits of this rebellion.

5) The heavily populated Mumbai Metropolitan Region comprising key constituencies from Mumbai, Thane and Navi Mumbai remains a challenge for the Congress-NCP alliance. The saffron parties rule the roost here and are likely to win 90 per cent seats in these key urban regions. 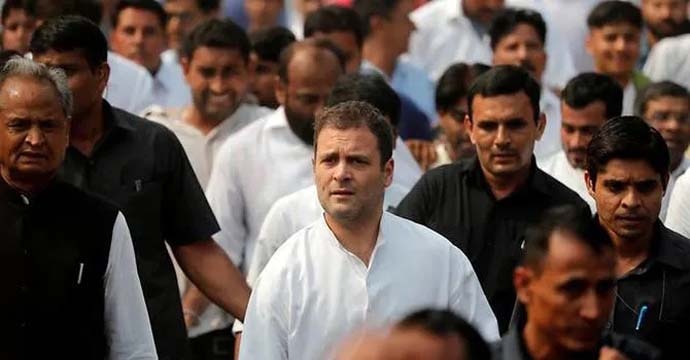 Abysmally low rallies by Rahul Gandhi and a no-show by Sonia and Priyanka Gandhi are going to affect the party's chances adversely. (File photo: Reuters)

6) With Shiv Sena leader Aaditya Thackeray contesting from Mumbai’s Worli constituency, the party made it a point to show that Mumbai remained politically the most important region for the party.

7) The Congress and NCP were trying to make the most of issues such as rising unemployment, troubled manufacturing sector, issues in crop insurance schemes and inadequate price for farm produce. They tried to put BJP in the negative spotlight by highlighting these issues. However, the BJP countered the move by cleverly bringing in the revocation of Article 370, Bharat Ratna to Veer Savarkar and challenging the nationalist spirit of the Congress-NCP.

It now remains to be seen if Congress and NCP can reverse the odds stacked against them and manage to scrape a decent number of seats to prevent the loss of face like the 2014 polls.

Also read: Why Congress looks headed for a poll rout in Maharashtra and Haryana