Maharashtra voters can't complain. They have got entertainment worth every penny

The political parties seem to have arrived at a tacit understanding that if they can't form the government, the voters must at least get nail-biting entertainment.

In 1956, the Election Commission spent Rs 6 per elector. In 2014, the poll body spent Rs 46 per elector. Remember, this money is indirectly paid by the 'honest' taxpayer of India. Now, nobody pays taxes as a duty to the nation. People pay because not paying comes with an added cost — if caught not paying.

Despite the expenses going up, which means more strain on the taxpayers' pockets, the Maharashtra polls were declared as a bland exercise with 'poll pundits' declaring that the results were a foregone conclusion. The politicians in the state, determined to work in the best interest of the people, thought otherwise. They decided that if they can't form a government, the voters must at least get nail-biting entertainment worth every penny.

Here's a rundown on how the political parties, all of them, including the Congress that came last, have kept people entertained this past week.

October 24: Results to the state elections are declared with the BJP getting 105 seats, followed by the Shiv Sena's 56, Nationalist Congress Party's (NCP) 54 and the Congress's 44. With the BJP and Shiv Sena that fought the elections together crossing the halfway mark of 144, pollsters said, "We told you so" in unison. 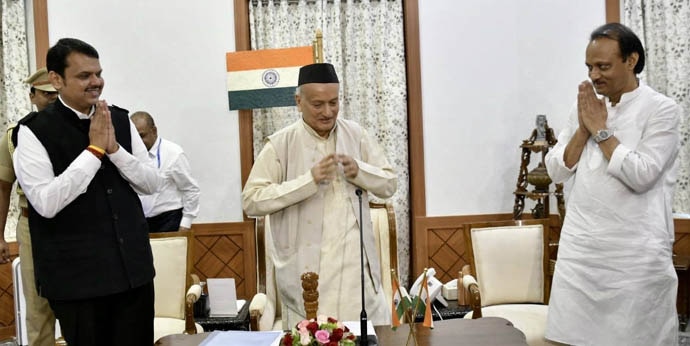 Nobody took the Shiv Sena's threat of calling off the alliance with BJP till it actually went to the NCP and Congress. (Photo: Twitter)

October 25: The Shiv Sena reminded the BJP of the promise of sharing of the chief minister's chair for 2.5 years each. The BJP claims no such discussion ever happened. Everyone said that the Sena is just throwing in some weight to extract better ministries.

October 27: Then BJP and Shiv Sena decided to go celebrate Diwali, and once celebrations are over, start the Mahabharat over seat-sharing once again.

Voters were still bored. They too decided to focus on Diwali, believing Sena and BJP will come along 'in the larger interest of the state'. Parties digging in their heels over portfolio sharing is nothing new. So, the political parties found themselves looking for more drama.

Post Diwali, the Sena remained firm on its demand for the chief minister's chair.

November 9: Over a fortnight after the last vote was counted, governor Bhagat Singh Koshyari gave BJP 48 hours to prove majority.

Remember, the voter was now bored to death with no government in sight. And it began to appear that the Shiv Sena was indeed serious about its threat to sever ties with the BJP over the top post.

November 10: The BJP, which had already held talks with the Sena, told Koshyari about its inability to go ahead.

November 11: Shiv Sena staked claim to form the government but asked Koshyari for three days to present the letters of support from NCP and Congress legislators.

In keeping with the tradition of governors favouring the ruling party, which installs them into sprawling governor houses, Koshyari denied Sena three days. Without wasting time, he invited party No 3, NCP, to indicate willingness to form government.

The NCP was given time till 8 pm, November 12, to indicate willingness.

The same day, Sena reached the SC with a plea to reverse the governor's decision.

People suddenly began to develop interest in the events happening in Maharashtra.

November 20: Sharad Pawar met Prime Minister Narendra Modi to discuss the plight of farmers. Now, it is true that while the parties were slugging it out to form the government, people did raise questions over how all parties seemed to care more about petty politics, ignoring important issues like the plight of farmers. But when has people saying something managed to pierce through the thick skin of politicians?

Also, if the actual price at which MLAs are bought and sold is revealed, people would start taking things more seriously. They would, at least, not call this politics petty.

Coming back to the meeting, the real motive behind Pawar calling on Modi remains shrouded in mystery to this day.

November 22: People actually began to think this could really have been about farmers when on November 22, the NCP and Congress agreed to have Sena chief Uddhav Thackeray as the chief minister.

Voters thought son Uddhav would finally fulfil the promise made to his father, late Bal Thackeray, of giving Maharashtra a Sena chief minister. Till they woke up on November 23.

November 23: At 5.47 am, when most humans are the deepest in sleep, BJP leader Devendra Fadnavis took oath as the Chief Minister of Maharashtra for the second time. NCP chief Ajit Pawar, meanwhile, swore to uphold the constitutional values as the deputy CM of Maharashtra. The voter was jolted out of sleep — literally and metaphorically.

Everybody cried, as everybody always cries: "murder of democracy".

The same day, the aggrieved parties reached the Supreme Court. They may have delayed government formation thinking and rethinking (read negotiating and renegotiating), but they sought an urgent hearing in the matter. The court obliged opening up to hear the matter on Sunday, November 24.

November 24: The court asked solicitor general Tushar Mehta to place before it on November 25 the letters of Koshyari recommending the revocation of President's rule.

Sharad Pawar blamed Ajit Pawar but everybody thought the Pawars are in this together till they fought it out on Twitter and in resorts. Ajit asserted himself as the boss while accepting 'Pawar saheb' as the supreme boss.

November 25: The SC said it will pronounce its verdict on Tuesday. Meanwhile, Fadnavis took charge as chief minister but Ajit Pawar did not assume the deputy chief minister's office. The younger Pawar clearly knew he does not have the numbers that he told the BJP he has. But the NCP, Congress and Shiv Sena looked all confident parading their flock of 162 MLAs at Hotel Grand Hyatt in Mumbai.

November 26: The political potboiler, however, came to a rather drab end with Fadnavis and Ajit Pawar resigning just hours after the Supreme Court ordered a floor test be held on Wednesday.

It must be said that it was unfair for Fadnavis, who ain't no great speaker, to end it with a speech during a press conference. He should have taken the floor test.

Jubilant over this turn of event in the story that has been one long series of turns of events, NCP leader Sanjay Raut said that Uddhav would be the next chief minister. In a rare show of magnanimity, which is only shown by political parties depending on political expediency, Raut said that Ajit Pawar was "now with us".

With the anti-corruption bureau having given 'nephew Pawar' a clean chit in the irrigation scam cases, and the new coalition showing readiness to accept him, there is reason enough for the deputy chief minister of three days to thank his stars which are shining (for now) despite the smog all around.

Moral of the story: Never again call an election dull!