Will the present political turmoil in the state result in a strong government that addresses the real issues irrespective of the ideological dichotomy?

Union Home Minister Amit Shah was uncharacteristically silent for nearly three weeks after the Maharashtra Assembly election results were declared, allowing former Chief Minister Devendra Fadnavis to lead negotiations with the Sena. Those talks broke down before they could begin on differences over whether the 50:50 commitment, reportedly made by Shah to Sena chief Uddhav Thackeray, applied only to equal sharing of Cabinet portfolios or to rotational chief ministers as well.

Backing Fadnavis’ stand, Shah finally broke his silence on November 13. He declared unequivocally that there was no closed-door, pre-poll agreement between him and Thackeray for the BJP and Shiv Sena to share the chief minister’s post by rotation. By in effect calling Thackeray a liar, Shah might have deliberately — and tactically — burnt the BJP’s bridges with the Sena. He could well believe that the political dalliance between the Sena and the Congress will be toxic for both parties’ vote banks, giving the BJP a clear advantage in a likely mid-term Assembly election.

The imposition of President’s Rule has meanwhile opened up a window of opportunity for the Congress and the NCP to negotiate from a position of strength with the Shiv Sena. To form a government, however, these ideologically inimical party formations will have to agree to a common minimum programme (CMP) of governance. The Congress knows it cannot afford to be a part of a Shiv Sena-led government that pursues a hardline Hindutva agenda. That includes backing the Uniform Civil Code (UCC) and the National Register of Citizens (NCR) across India. Both are red lines for the Congress.

Another worry for the Congress central leadership is the likely erosion of electoral support among minorities in both Maharashtra and nationally if it allies with what, for decades, it has vilified as a communal party. However, the Congress’ local state leaders, including a large section of MLAs who won hard-fought seats in the 2019 Assembly election, regard the BJP as a bigger threat than the Shiv Sena. 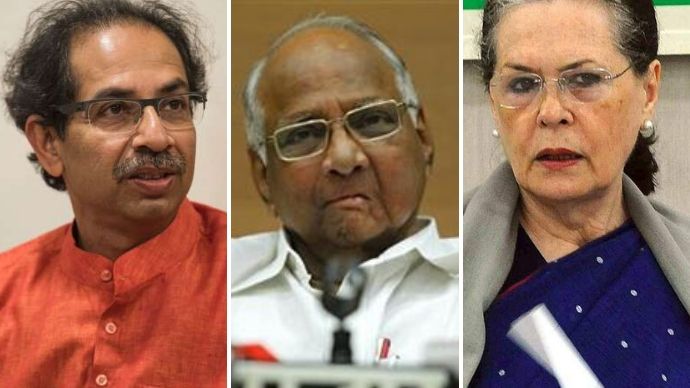 A Shiv Sena and NCP-Congress alliance will not address the key issue: The ideological dichotomy between the Congress and the Shiv Sena. (Photo: Reuters)

There is, of course, history to this.

The Sena was formed with tacit Congress support in Mumbai in 1966 to break the hold of Communist leaders in the city’s trade unions. Significantly, a senior Congress leader, Ramrao Adik, accompanied Shiv Sena chief Bal Keshav Thackeray during his speech at the Sena’s first ever public rally in 1967. Bal Thackeray had been a cartoonist sitting at a desk in the Free Press Journal newspaper office before he started his own political cartoon weekly Marmik in 1960. Six years later, he was reportedly encouraged by local Congress leaders to launch the Sena.

Throughout the 1970s, the Congress and the Sena maintained cordial relations. Thackeray positioned his party as a defender of jobs for the Maharashtrian manoos. His stormtroopers at first attacked south Indians, Gujaratis and Biharis. Later, he adopted an antiMuslim animus while cultivating cordial relations with Congress’ Muslim leaders like former CM AR Antulay. During the draconian Emergency in 1975, Thackeray was one of very few Opposition leaders to support then Prime Minister Indira Gandhi — reportedly to avoid arrest. Thousands of other Opposition leaders — from Jayaprakash Narayan to Atal Bihari Vajpayee — were jailed.

What happens next? A Shiv Sena NCP-Congress alliance will not address the key issue: The ideological dichotomy between the Congress and the Shiv Sena. Apart from demanding a CMP and a rotational CM as a price for its support to the Sena, NCP-Congress leaders will seek a portfolio sharing formula of reportedly one Cabinet berth for every four MLAs.

Devil in the details

With 44 MLAs, the Congress could thus expect 11 Cabinet portfolios. The NCP with 54 MLAs could seek 13 portfolios, leaving the Shiv Sena’s 56 MLAs with a mere 14 portfolios in the 38- member Maharashtra Cabinet. Apart from a strictly ‘secular’ CMP bereft of the UCC and NRC, the sharing of Cabinet portfolios could be a deal breaker. Where does this leave Maharashtra? At the moment without a government. Under the Constitution, however, any formation that can demonstrate in writing to the governor during the pendency of President’s Rule that it has the numbers to form a stable government will be given an opportunity to prove its majority on the floor of the Assembly.

Crucially, if the Sena forms an alliance government with the NCP-Congress, it knows that the Congress will have a veto on key governance issues. With major infrastructure projects in Mumbai — including 13 new metro lines, a coastal road and a trans-habour link — at various stages of development, a strong government is imperative.

Unseasonal rains in Maharashtra have damaged crops in the state, deepening the rural crisis. Immediate attention to farmers’ issues has suffered due to the three-week-long uncertainty over government formation in Maharashtra. That should be — but is clearly not — every party’s priority.

Post your comment
#BJP, #Congress, #NCP, #Shivsena
The views and opinions expressed in this article are those of the authors and do not necessarily reflect the official policy or position of DailyO.in or the India Today Group. The writers are solely responsible for any claims arising out of the contents of this article.