Karwan-e-Mohabbat: On finding the meaning of love and unity in Ambedkar and Gandhi in Gujarat

Our last visit to a family targeted by hate violence in this phase of the Karwan was to a single Dalit woman Dahiben in Karola village in the tribal Panchmahals district of Gujarat. She has been persecuted as a witch or daakan in Gujarati for a more than a dozen years since her husband died. But this is also the story of a woman who spiritedly fought back and overcame it all.

When we set out on this journey, we expected to meet families hit by lynchings, Dalit atrocities, and communally driven state violence. But our feminist hosts first in Rajasthan and then in Gujarat reminded us that along with religious minorities, Dalits and Adivasis, women, especially single women, continue to be battered by a medieval violence, by being branded as witches.

Dahiben was just 30 years old when her husband suddenly died, leaving her with two young sons. No one had detected any previous grave illness, and his death was sudden and immediate. From what she described to us, it sounded like a classic heart attack.

But her husband’s older brother was convinced that his sister-in-law Dahiben was a daakan or witch, and she had brought the death upon her husband through her diabolic witchcraft. Since then, she was blamed for every misfortune, illness or death in the family, even when a nephew took ill in distant Bangalore.

Her husband had earned his livelihood as a part-time sanitation worker in a public veterinary hospital, and after his death, she inherited his job. The salary was as little as 350 rupees a month, but it was precious in helping her feed her children.

However, her brother-in-law continued to harass her, labelling her a witch everywhere she went. He frequently followed her to her place of work and abused her. Finding her alone anywhere, he would try to force himself sexually on her. His wife became paralysed and he attributed this adversity also to her evil witchcraft. He performed many dramatic public exorcisms.

He also stalked her in her home, a small earth hut which her husband had built in the fields he jointly held with his brothers. He demanded that she abandons her home, as she was destroying her husband’s family with her witchcraft. She argued back feistily that if she was indeed a witch, why would she leave him alive? She said she would never leave the home her husband had built, or his share of the land which she held for her two sons.

One day he accosted her as she was walking to work at the veterinary hospital. Screaming that she was a witch who must be destroyed, he hit her on her head three times with a hockey stick. She fell to the ground, her skull bleeding profusely, and her spine painfully injured. A shopkeeper phoned for an ambulance.

She spent 20 days in the hospital, with 24 stitches on her head. She recovered painfully. Her older son dropped out of school and resolved that he would not let her out of his sight. He found work for both of them, making packing boxes in a milk cooperative so that she would not have to go anywhere alone. They go to work together and return together.

Anandi is a tribal and women’s rights organisation that comes to the aid of women who are branded as witches. With their help, the family was able to get a police case registered against her attacker. But he was arrested only for a day and immediately got bail. He was an influential man in the village, a patwari.

He is unrepentant even today, perhaps convinced that his continuing misfortunes are caused by her witchcraft, or perhaps wishing to expel his brother’s widow from the land her husband jointly held with his brothers. Whatever the reason, he continues to stalk her, humiliating her publicly by calling her a witch each time, demanding that she leaves her home and land, and threatening this time to ensure that he kills her.

But she has two fine and protective grown sons, and the many meetings organised by Anandi with the local community have resulted in greater local support than we have encountered in any instance during the Karwan. 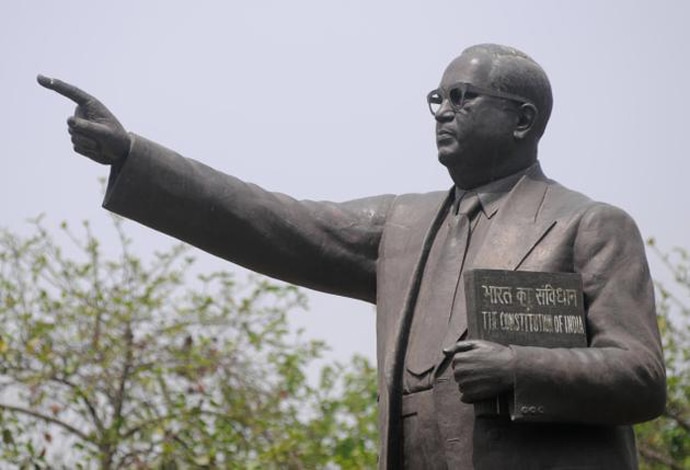 Today is the last day of the second phase of the Karwan. We arrived late last night in Godhra. The day began with a meeting at the Gandhi Ashram in the city. The meeting was significant for two reasons. The first was that it was the burning of a train compartment at Godhra station tragically killing its Hindu travellers more than 15 years earlier that have set in motion of a cycle of hate violence that has not ended until today.

The second was that the Gandhi Ashram in Godhra was established exactly 100 years back, in 1917, by the Mahatma, and he often held his prayer meetings, for peace between people of diverse faiths and for his work to fight untouchability, in the same hall with a high tiled roof in which we had gathered a century earlier.

Today, many reject Gandhi because of his opposition to untouchability but not to caste. On this, I find myself entirely with Ambedkar, who believed that untouchability is not an aberration of caste but is intrinsic to caste and that social equality and fraternity requires not the reform but the demolition of caste.

However, I still love and revere Gandhi as the bravest fighter for an India built on the foundations of love and mutual respect and goodwill. I thought often during our travels of what we believe was Gandhi’s finest hour, the last months of his life.

Think of it. A million people had died in Hindu-Muslim riots, the country had been torn apart in a frenzy of hate, trainloads of people were slaughtered in trains travelling in both directions, and angry refugees were returning in millions from what was now Pakistan with terrifying stories of communal bloodletting, loss, and betrayals.

And yet amidst all of this, Gandhi still had the courage to speak unwaveringly of love, unity and equal citizenship as the only legitimate basis of Indian nationhood, as he walked alone in places where hatred was at its pinnacle, like Naokholi and the country’s capital Delhi, which at the time was smouldering with hate.

It is this radical love to which the Karwan-e-Mohabbat has tried to pay small and modest tribute, therefore we were both inspired and sobered to sit in the same hall in his Ashram, as we paid tribute to the audacious fearless courage of his love, in a town that had become the epicentre of hate politics, exactly one hundred years after him.

In the Karwan, we lustily shout out the slogan Jai Bhim. But we like to follow this immediately with Jai Gandhi. In both these great icons, we find pathways to love, to a fraternity, to a sisterhood and brotherhood of all peoples. Jai Bhim! Jai Gandhi!

Also read: Narendra Modi is as much a dynast as Rahul Gandhi

#Ambedkar, #Mahatma Gandhi, #Violence, #Karwan-e-mohabbat
The views and opinions expressed in this article are those of the authors and do not necessarily reflect the official policy or position of DailyO.in or the India Today Group. The writers are solely responsible for any claims arising out of the contents of this article.