Poetry of 'I don't agree': But why is Didi still in denial?

Mamata Banerjee channelled her inner poetess as she wrote a poem and shared it on social media. If Didi gets past denial, she will see the sea change that has taken place in West Bengal.

It was a Bengali poem put up by Bengal's Chief Minister Mamata Banerjee. She also cared enough to put up a Hindi and English translation of it. The poem is unsigned, but since the poem is original and Banerjee is known as a poetess, I am assuming she is the brain behind these words.

Here's the English version of the poem:

I Do Not Agree pic.twitter.com/RFVjiunJQt

When I was a student of English Literature, reading and deciphering the hidden meanings of poetry was one my favourite activities.

But this one, this poem rhere, seemed very easy to decipher if you correlate it with its period of publication (if you are a student of literature, you know that’s quite important).

Titled, 'I don't agree', the poem is pretty straightforward.

Mamata Banerjee has apparently hit out against the BJP for playing the communal card in the Lok Sabha elections (Fact: BJP actually spoke about inclusiveness in its election slogan and poll manifesto). Banerjee has also written that she doesn't believe in religious aggression (Fact: Political killings and religious politics have reached an unprecedented high during Banerjee's tenure).

She then took a dig at the party which is residing on the "mountains of riches” (Fact: There have been no such proof of money being transported into Bengal before the elections). Lastly, she spoke about the arithmetic that makes aggression a virtue (Fact: It was the Trinamool cadres who, to my mind, allegedly aggressively captured booths during the Panchayat polls that preceded the Lok Sabha Elections in Bengal).

Below is a snapshot of what happened in Bengal during the Panchayat elections — which made even the Supreme Court show concern.

Here's why those who cannot win a free and fair election conducted through #EVMs want ballot papers and ballot boxes back. Please share freely so people of #India know the truth since doormat #media won't tell this story.(Pix of #WestBengal panchayat polls in May 2018.) pic.twitter.com/83jy4RBKKg

However, if you look at the Bengali version closely, you see that the poem has not been translated properly in English.

I would translate these two lines as: "Selling religion is whose trump card // Does money reside in the mountains of religion??"

As I see it, through the words of poetry, Mamata Banerjee is trying to indicate that the BJP won the elections primarily because of two reasons — money and the communal card. Channeling her inner poetess: When will you accept reality and try to win back voters, Mamata Di? (Source: India Today)

She is reiterating what most Trinamool leaders have said long before the elections results. What she hasn't mentioned in all this is another startling allegation though — that CPM cadres were helping the BJP in the elections. That's one of the wildest allegations I have ever heard but here, that's beside the point.

Anyone who has a little ground-level contact will know that the above statements are not true.

What is true is that there has been a tectonic shift in political support in Bengal.

I have been acutely aware of it. In fact, I had predicted that the BJP was set to get a thumbs up from the people of West Bengal because of a strong favourable undercurrent. I had also indicated the possible reasons why Bengal was warming up to a non-Bengali leader for the first time in history.

I had collected the primary data through my contacts who are small traders in West Bengal. From the very beginning, there was a clear mandate in favour of the BJP in a lot of regions of West Bengal. Anybody in Bengal, with an ear to the ground, would have caught the reverberations of an underground Modi wave. Violence erupted in several parts of West Bengal, just when the state was about to go to vote. (Source: India Today)

To suggest that the Modi wave was created artificially — by bribing the voters and playing Hindus against the minorities — would be akin to saying that the people of Bengal were bribed with either hard cash or ideology. Apart from disrespecting the people of Bengal, it is a shameful derogatory statement without any shred of proof.

Those who are saying that Modi bribed his way into Bengal are living in denial, despite a clear suggestion that public opinion is slowly turning against the Trinamool Congress.

And that is dangerous.

History stands witness that those who live in denial will refuse to admit that the common people have turned against them. They will always believe that the people's mandate is with them and only a section of them are against us. Hence, the consequence of a regressive and dangerous urge to convert those disgruntled sections back into the fold — by hook or by crook. That is where the crux of the problem is.

In my opinion, more troubled times are ahead of Bengal. There are strong chances of a repercussions against a section of the population for not voting for the Trinamool Congress.

Why am I saying this?

The constant reports of pre-poll violence, not withstanding reports of Trinamool cadres taking out bike rallies, brandishing firearms to scare voters. One such incident was even caught by the cameras of India Today.

Will Bengal see bloody post-poll violence? It's a mathematical certainty — unless the state government takes a firm resolve to reign in all the Trinamool cadres who had terrorised a certain section of the Bengalis. If that doesn't happen, incidents of 'revenge' in West Bengal will be so common that it would stop making news anymore.

If the Trinamool Congress doesn't wake up to the fact that a section of the population in Bengal is disgusted with the way they have run the state and tries instead to suppress them even more firmly, then the end of Trinamool, as I see it, is even nearer. 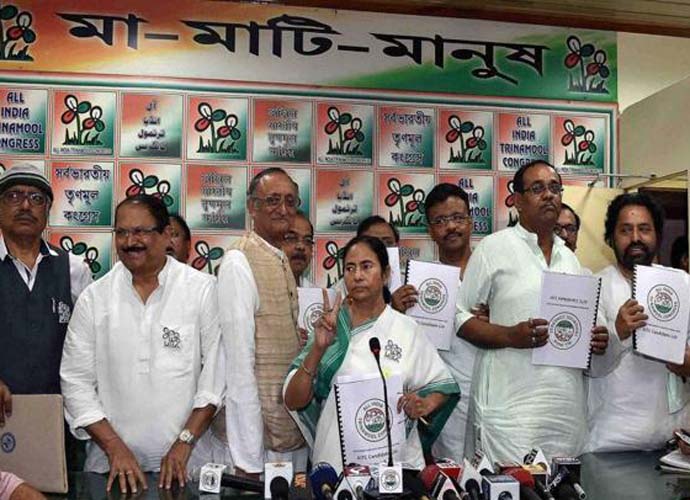 Let's not forget that the BJP has come back strongly in the state and the breeze of a change of government in the forthcoming Bidhan Sabha elections is already in the air.

From here on, Trinamool has just two options — try and get back to good governance and woo back the voters who are rooting for a change, or unleash violent cadres on the voters who have voted against the Trinamool.

If the Trinamool doesn't change its world view, then the breeze of change will soon turn into a typhoon and engulf the entire party. It will ravage the old order into oblivion. But in the process, many innocent lives could be impacted.

And with that, I don't agree.