Didi vs Perfect Storm: Why West Bengal's Trinamool Congress may soon reach a point of no return

Between charges of minority appeasement, reported admissions of the same, and a total miscalculation of the minority vote itself, can Mamata Banerjee withstand the storm she herself has unleashed?

Let me stick my neck out and say that by all indications, the Trinamool Congress will not be able to hold onto power in Bengal in the forthcoming Bidhan Sabha Elections which will be held tentatively on 26 May, 2021.

The BJP still doesn't have an official chief minister candidate but sources say they will announce one next year. On the other hand, Mamata Banerjee will seek a second term for herself.

This time around though, things aren't in Mamata Banerjee's favour as there are several crucial factors that are strongly weighing against her and the Trinamool Congress.

Unseating 34 years of Left rule in West Bengal, Mamata Banerjee stormed into power with a popular narrative of being a pro-farmer party. The Singur protest — which forced the Tata Nano factory out of West Bengal — is widely regarded as the movement that finally sealed her fate in Bengal, by eventually ousting the Left. How Time Moves: Once the issue that sealed the deal for Mamata, Singur farmers now seem to be lobbying with the BJP. (Photo: Reuters)

But today, the political narrative has drastically changed. Stung by a job crisis and a lack of facilities, the same Singur farmers are now actively lobbying with the BJP to bring back heavy industries to their village. BJP MP, Locket Chatterjee, has also been elected from the Hoogly constituency — under which Singur falls.

Back in 2016, the main issue was industrialisation and the anti-farmer leaning of the CPM government, led by former Chief Minister, Buddhadeb Bhattacharjee. Today, the electorate seems to be polarised on religious lines amidst swirling allegations that the current government is more sympathetic towards the minorities. So, what would any other chief minister do? Well, generally, he or she would be expected to say that no, all subjects of a state are equal and no particular community is being appeased.

That may be any other chief minister — but not the Bengal CM.

The West Bengal Chief Minister Mamata Banerjee is made of sterner stuff. She has openly given statements that put forward her stance regarding the allegations of minority appeasement. “I appease Muslims... Will do it 100 times as there is no harm in taking kicks from a cow that gives you milk,” Mamata said, according to India Today.

So, nobody else but Mamata Banerjee herself is setting the narrative of her being biased towards the minorities. The question is — is this stance helping her?

Well, this knife seems to be cutting from both sides.

Unfortunately, this remark came under heavy criticism from minority leaders in West Bengal as they felt that West Bengal CM compared them with a cow. One that kicks.

“She compared Muslims with cows and this will bring her fall. Having bagged many seats in the minority-dominated constituencies she does not need us till another election comes in the state. Her divisive politics will make her a gram panchayat pradhan instead of her dream of becoming pradhan mantri,” said Ibrahim Siddique, a senior cleric of Furfura Shariff in Hooghly district, according to The Statesman. The same report also quotes a professor Abdul Matin from Jadavpur University, reportedly alleging that Mamata is, "...doing politics of religious polarisation instead of building a bridge between communities."

This is where the crux of the problem lies — and this is why the Trinamool Congress might be losing their grip over the state of West Bengal.

It is a well-known fact that the minority community in any state doesn't want to stay in an air-tight chamber of its own.

Anybody who has been to West Bengal will know that most of the minorities have no problem with neutral state policies which don't discriminate between people on religious lines. Hence, the token gestures of minority appeasement by the government — like an Eid bonus to only Muslim state government employees — may not be serving any real purpose at all. If the indications on the ground are to be believed, then the minority might not be voting for Mamata Banerjee's party like a homogeneous block. That might be a death knell to her hopes to come back as the Chief Minister of West Bengal because the results of the just concluded Lok Sabha elections show that the BJP has been able to consolidate its votes. That is the only possible explanation for the BJP's fantastic performance in the just concluded Lok Sabha Elections.

If the BJP is able to convince the people of West Bengal that they will bring a stable government and will work towards development and providing better amenities to the farmers of the state, then it is for certain that the BJP will gain the trust of the farming community, a majority voting block of the state — the CPM rode to power riding on the support of the farmers, the Trinamool banked on them too during the last Lok Sabha elections.

It's time for the BJP to woo Bengal's farmers with all the right promises and going by the Lok Sabha election results, the BJP narrative seems to be working already.

On the other hand, the TMC is deeply troubled by the allegations of lawlessness in Bengal — the Supreme Court of India has time and again (examples abound, in many cases) expressed its concern over the lack of law and order in Bengal. At least once, the Supreme Court pointed out that there has been a failure of the constitutional machinery in Bengal. Terming the last Panchayat elections in Bengal as "shocking", the Supreme Court observed that "over 34% seats going uncontested makes it clear that part IX of the Constitution, dealing with the panchayat, was not functioning in the state."

So, here we have a head of a province who is admitting that she is biased, we have the top court of the country expressing their concern over the prevailing lawlessness and, on top of that — there is no guarantee of any overwhelming support from the minority community. 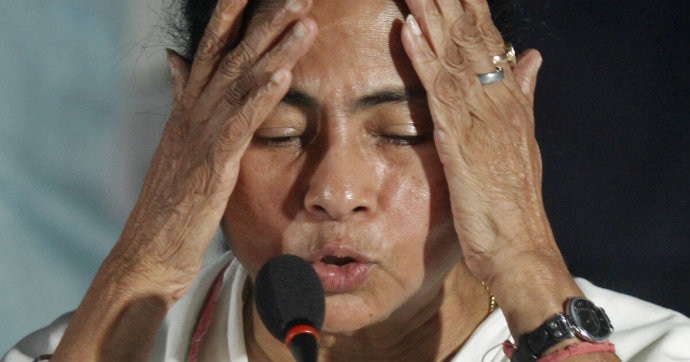 A dream turned nightmare: Is Nabanna slipping away from Mamata's grip? (Photo: Reuters)

That can be a lethal combination for the Trinamool Congress which already seems cornered on various issues — the latest being the junior doctors' strike in Bengal, where none of the narratives being floated by the party seems to be working.

It is safe to say that all these potentially disastrous incidents are political self-goals where the principal political opponents didn't have to do anything. For example, the BJP in Bengal is merely providing moral support to the agitating doctors and it is not particularly a BJP movement against the Trinamool government. The same goes with the plight of the farmers in Singur, who allege that they have been conned during the agitation against the Tata factory.

Trinamool Congress seems to be on a path that is taking it further away from Nabanna — the state government headquarters that they have created themselves — with every passing day.

Soon, they might reach a point of no return.

Also read: 'Bengal only for Bengalis': Who is Mamata Banerjee kidding? That Bengal is long gone