Why Mamata Banerjee's 1:1 formula against the BJP may turn out to be a dud

Sensing the current political pulse of the country, the West Bengal CM has burst onto the national scene with her own ambitions in mind.

West Bengal chief minister Mamata Banerjee's "1:1" proposal for the Opposition to fight against the BJP, though politically astute, seems unlikely to come to fruition.

According to the "1:1" formula, the Opposition, including the Congress, would put up one common candidate which the rest would support against each candidate of the BJP across the country. Each regional party would fight the BJP from its own stronghold. For instance, the TDP in Andhra Pradesh, TRS in Telangana, DMK in Tamil Nadu, Trinamool in West Bengal, BJD in Odisha, RJD in Bihar and SP-BSP in Uttar Pradesh. In the rest of the states, Banerjee wants the grand old party to battle against the BJP. (The mentioned states together account for 264 Lok Sabha seats.)

It cannot be ruled out that the "1:1" formula is a ladder for the Trinamool supremo's own ambition to the prime minister's chair. West Bengal sends the third largest number of MPs to the Lok Sabha-42, only after Maharashtra's 48 and Uttar Pradesh's 80. According to the formula, Trinamool would fight all the 42 seats, or may leave a seat from North Bengal for the Congress. 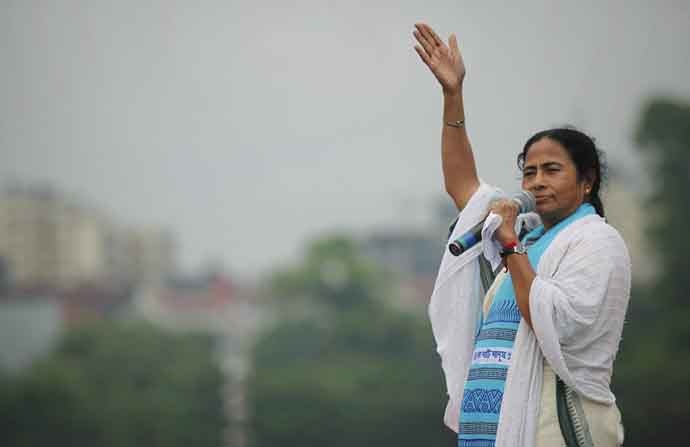 On the other hand, the Congress has to cede at least 20 seats to the NCP in Maharashtra, if the former really wants to defeat the BJP. In Uttar Pradesh, the SP-BSP will have to come together to corner the BJP as they did in the recent by-polls of Gorakhpur and Phulpur. In such a scenario, both the parties would be contesting on 37-38 seats each leaving the two traditional seats of Amethi and Rae Bareli to the Congress and the rest two-three seats to smaller parties like the RLD and the NISHAD party. The RJD in Bihar will contest on 34-35 seats out of the 40 leaving the rest to the Congress, CPI, HAM and Sharad Yadav’s JD(U) faction.

Tamil Nadu's DMK will also contest around 30 of the 39 seats, ceding the rest to the Congress, CPM, CPI and MDMK. The TDP will contest on 25 seats in Andhra Pradesh against the other Opposition party YSR Congress and may also contest all the 17 seats in Telangana, the stronghold of TRS, though TDP is a relatively weaker party there. Also, the BJD would contest all the 21 seats in Odisha.

Sensing the current political pulse of the country, Banerjee has burst onto the national scene with her own ambitions in mind. Through national politics, Banerjee is trying to divert the attention of Bengalis from the anti-incumbency that her government is currently facing, presenting herself as the only unofficial potential Bengali PM candidate. She wants to secure the targeted 39-40 seats from the state igniting the Bengali emotions.

If that happens, Trinamool Congress would emerge as the largest regional party in the upcoming Lok Sabha elections. If there arises a situation where the BJP-led NDA is far away from the majority mark and the regional forces touching the magical figure of 272 with the help of the Congress, then definitely Banerjee would be the leading candidate for the post of the prime minister.

However, for that dream to come true, the Congress has to get lesser number of seats than the combine of the regional parties. It is to keep in mind that in many states where the Congress would lead the battle, it has to give away a chunk of seats to smaller regional parties such as the JMM and JVM in Jharkhand, AIUDF in Assam, IUML, RSP and KC(M) in Kerala (besides battling another anti-BJP front led by the CPM in the state), NC in Jammu & Kashmir and JD(S) in Karnataka, if Modi magic is to be checked.

Keeping this arithmetic in mind, Banerjee has proposed the "1:1" formula for the Opposition reducing the contesting seats of the Congress to a mere 230-240,only to limit the latter’s political ambitions.

She has definitely played a shrewd political gamble ensuring that the regional parties contest more seats than the Congress even though the success of it seems less possible. It is a known fact that Banerjee doesn't share a particularly warm equation with Congress president Rahul Gandhi compared to the rapport she shares with Sonia Gandhi. Will Rahul allow Banerjee to sit in the PM's throne, which the former himself is desiring for a long time?

Sonia Gandhi’s recent dinner party was actually a reminder to the regional parties that though the Congress is weak, it still is the largest Opposition party in the country. According to Congress leaders, any non-BJP coalition has to be led by the Congress only to make it successful. It seems that Banerjee herself is over confident that her party, the Trinamool Congress, would be winning almost all the seats, ignoring the fact that the rising communal incidents in West Bengal would only strengthen the BJP.

Besides, the Left Front could also act as a spoiler by cutting the anti-BJP votes. There is a probability that local Left leaders and supporters in the state, frustrated with Trinamool policies, may transfer their own votes to the saffron camp only to counter Banerjee's rise in national politics.

Also, to assume that other regional stalwarts such as Mayawati, N Chandrababu Naidu, K Chandrasekhar Rao or Sharad Pawar will sit quietly and watch the tamasha is simply unimaginable.

The ongoing quest for the PM's chair is a reminder to the age-old adage that sitting in a throne is a thousand times harder than winning one.

#Opposition, #PM candidate, #Lok Sabha elections 2019, #Mamata Banerjee
The views and opinions expressed in this article are those of the authors and do not necessarily reflect the official policy or position of DailyO.in or the India Today Group. The writers are solely responsible for any claims arising out of the contents of this article.