As the doctors continue to protest, West Bengal remains the worst-hit state with at least 13 big government hospitals affected.

The West Bengal CM Mamata Banerjee has a favourite refrain: We will not let Bengal become Gujarat.

She is addressing PM Modi without naming him. What she conveniently forgets is that the ex-Gujarat CM has a resounding people's mandate of governing India for a second term. While people of her state once again reposed their faith in her, but with a lot of reservation and a much-reduced margin. But then such is Mamata's world view and her captive audience used to willy-nilly lap up whatever she dished out.

That is until BJP presented an alternative. A party that was once loved for routing the Left Front's oppressive rule has imbibed the very characteristics it opposed once. Thousands of ex-Left front cadres have joined Trinamool and have brought with them their culture of violence, intimidation, protection money, commission and cut money.

As for Bengal becoming Gujarat, rest assured, no matter how hard she tries the Bengal CM will never be able to turn her state into Gujarat. The fact is that a large chunk of Bengal's labour force is employed in Gujarat. They are there because there are no employment opportunities in Bengal. As for non-Bengalis eking out a living in the state, they have a constitutionally protected right to do so.

As she said, she does not recognise PM Modi as "her PM". Cannot help but wonder what is her stand on the Constitution of the land? 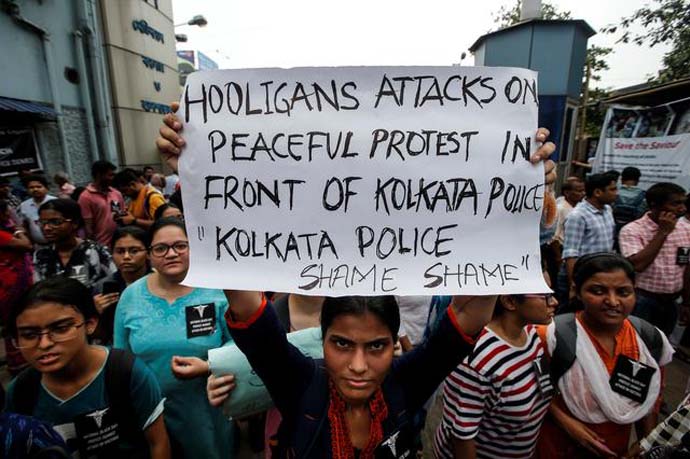 Now, the new Home Minister is responsible for inciting cadres. What cadres? The violence started when a few junior doctors were attacked ruthlessly by a mob from a particular area. It is sheer dumb luck that they survived. There were over two hundred in the mob, five arrests so far! Yes, they are an acknowledged vote bank of Didi had said, "Je goru dudh dei tar lathio khete hoi (if a cow gives milk, one has to be prepared for its kicks also)."

Fine, but at what cost? Who gets the milk? And the kick?

Choose wisely, because the majority cannot forever live under looming clouds of fear. They cannot be forever browbeaten and treated as second class citizens.

Yes, doctors have a moral obligation to treat patients and that cannot be denied under any circumstances. In hospital after hospital in the state, you shall see young doctors battling all odds to provide effective healthcare to the poorest. They toil and generally succeed despite all odds.

But doctors cannot be expected to attend to their duties under the ever-present threat of the next murderous assault. They cannot work when they know the ruling party would choose votes over what is right and wrong. Nobody can work when they know appeals for protection and intervention would lead to threats and abuse.

The media in the state knows who and where the culprits are. How long will the police need to trace them? Who will be responsible for the lack of treatment for poor patients? The junior doctors?

Also read: Doctors' protest in Kolkata: How Mamata Banerjee made sure things go and remain out of control

#CPM, #BJP, #TMC, #Narendra Modi
The views and opinions expressed in this article are those of the authors and do not necessarily reflect the official policy or position of DailyO.in or the India Today Group. The writers are solely responsible for any claims arising out of the contents of this article.