Manipur, one of the most sensitive states of the Northeast, is currently marred by severe violence in the wake of the state government's notification (December 9) creating seven new districts. This raises the number of districts in the state to 16.

Creation of the new districts led to loud protests by United Naga Council (UNC) and other Naga leaders who have alleged that the Okram Ibobi Singh government's "aim is to divide the Naga people". Their suspicion may not be totally unfounded.

They are also incensed by the fact that the government did not consult the Hill Area Committees (HAC) prior to the crucial decision. Under Article 371 (C) of the Constitution, it's mandatory to consult the HAC on all legislative matters affecting the hill areas of the state. 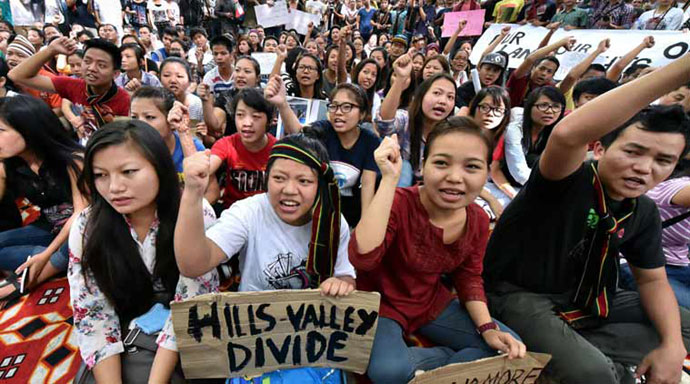 Students at a demonstration against violence in Manipur, at Jantar Mantar in New Delhi. (Source: PTI file)

To make its ire felt, the UNC began an economic blockade leading to arrests of prominent leaders. The government, on its part, acted tough to quell the protests. UNC leaders Gaidon Kamei and Stephen Lamkang were quickly arrested and denied bail. They have been remanded in custody till January 27. This is further upsetting for the Naga cause.

In the meantime, violent incidents have been recurring at a fast pace and regular intervals. On December 14, the day Ibobi Singh was slated to inaugurate the new Tengnoupal district (earlier in Chandel), three commandos were fatally ambushed.

Subsequently, three days later on December 17, nearly suspected 70 NSCN-IM armed militants not only attacked a police post but decamped with nine sophisticated weapons and copious quantity of ammunition. In swift retaliation, a Meitei mob allegedly attacked one of the largest and important Christian places of worship — the Manipur Baptist Church in Imphal. Further, several vehicles carrying Nagas to Ukhrul for Christmas festivities, were torched in a free-for-all show of vengeance.

Such violent incidents happening ahead of Christmas remains a very discouraging sign. It's a huge dampener for the Christians. Earlier , Ibobi Singh narrowly escaped attempt on his life in Ukhrul airport when suspected Naga militants opened fire in a very daring act of aggression threatening the peace pact .

At a brainstorming session of the central and state intelligence and security agencies, it was revealed that despite all possible efforts, flow of funds to insurgents is still not under control in Manipur and Nagaland, and disturbingly, remittances are maintained through non-banking channels.

This is indeed a sad commentary. Demonetisation effects are expected to take care of this malady.

Similarly, there is a pattern of arms smuggling from China to Myanmar to India. Agencies are in the process of identifying the couriers and arms dealers. Flow of unauthorised funds and arms into these twin states are a cause of real concern. This also necessitates setting up of a good forensic lab and a centre for cyber forensics to address the growing concern.

As passions run high amongst the Naga and Manipuri rebels in the light of the ongoing violence, further escalation cannot be ruled out.

Both the warring entities have the potential to fight till death. And armed with modern weaponry, unlimited cash, good training and strong political commitment, chances of confrontation multiply and these factors make the situation more volatile.

Nagas are unlikely to relent, especially as the newly formed districts have come into being from slices of Naga-dominated areas.

Under present circumstances, political intervention by responsible and mature quarters is needed to defuse the ongoing crisis.

We must also remember that both Naga and the Manipuri insurgent groups have different safe havens outside the Indian frontiers. Any excess pressure may perhaps see them seeking refuge in those sanctuaries further complicating the issue and transporting us back to the older times . Any inept or reckless handling may impede any chances of peace talks to restore order.

Whatever is done, must be executed with precision and needs to be attempted sooner than later. Meanwhile, Christmas gaiety and the festive fervour must retain its spirit in the larger interest of peace.

Also read: With elections approaching, Manipur seems to be heading towards civil unrest

#Manipur, #Naga problem, #New districts
The views and opinions expressed in this article are those of the authors and do not necessarily reflect the official policy or position of DailyO.in or the India Today Group. The writers are solely responsible for any claims arising out of the contents of this article.